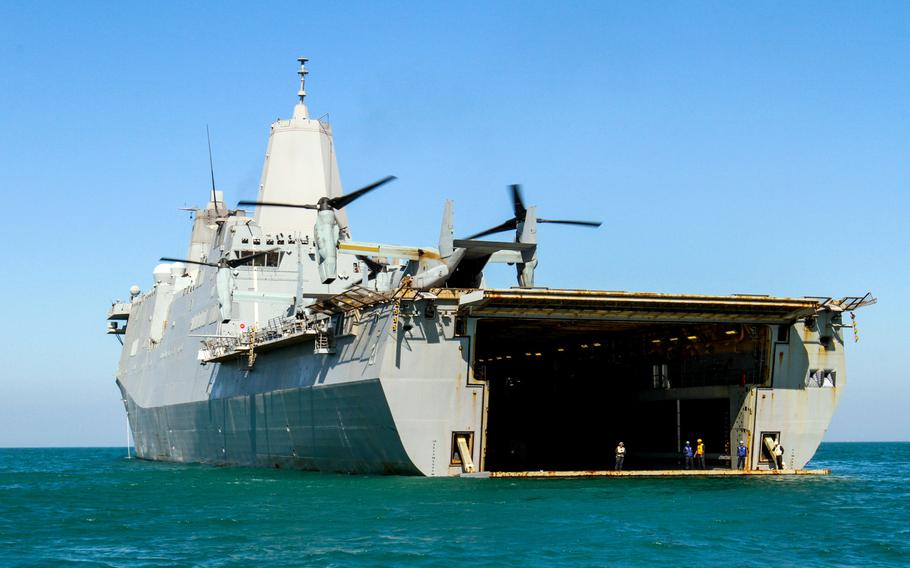 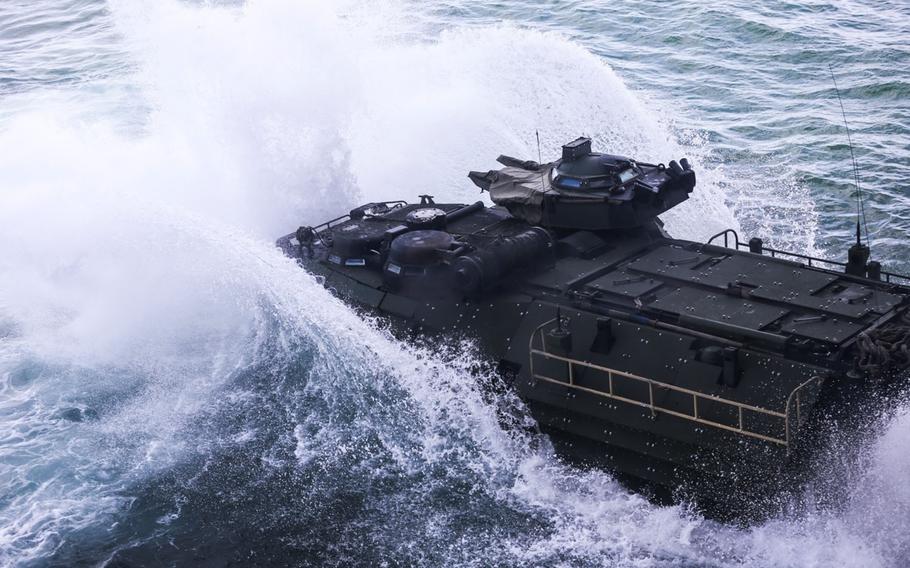 NAPLES, Italy — For Marine pilot Capt. Dave Haines, everything about a recent landing exercise in the Persian Gulf was routine — even if the ship and crew weren’t.

Only after Haines touched his tilt-rotor Osprey to the landing deck and climbed out was he reminded that the USS Ponce, a former amphibious ship now used as a platform for countermine and special operations, was run by civilian mariners.

“I’ll put it this way, you’d have never known … until you get the green light, get out and see guys with beards and long hair,” Haines said.

Clean-shaven Marines like Haines can expect to work alongside civilians more often in the years ahead if the Corps gets its way.

Faced with a limited number of amphibious ships and a growing emphasis on crisis-response missions in places like Africa and the Pacific, the Marines are looking toward the Navy’s civilian-operated supply fleet to fill some of the gap. The fleet includes vessels originally designed to move Marine weapons and vehicles, such as oil tankers modified into floating docks, cargo ships adapted to berth troops and a thin-skinned aluminum catamaran that can be used to launch special operations forces or humanitarian missions.

In a pinch, the Ponce could serve as a “lily pad,” or jumping-off point, for Haines’ crisis-response battalion in Kuwait should amphibious ships be unavailable, Corps officials say.

“What we’ve realized is there are a lot of capabilities that are hiding in plain sight,” said Jim Strock, director of the Corps’ Seabasing Integration division, which heads the effort.

It’s not a natural embrace for Marine leaders. They insist amphibious warships — the large, armored vessels capable of pouring thousands of troops and equipment onto shore — are preferable in the long run to unarmored civilian ships, yet they need immediate options for smaller units stationed across the globe.

The Marines have created battalion task forces in Spain, Kuwait and Australia in recent years to train with nearby forces and to be prepared for crisis response. All have integrated air and artillery, but each lacks dedicated ships. Tighter budgets and other shipbuilding priorities mean new additions will be slow to arrive, putting a pinch on the current fleet when need arises.

“The force structure, the number of amphibious ships, is not enough to do what the Marines want to do — warfight — and not enough to satisfy the combatant commanders in peacetime,” said Bryan Clark, a naval analyst with the Center for Strategic and Budgetary Assessments.

Although the Navy has long considered using supply ships for limited operations, only in recent years have the Marines experimented with the possibilities. They focused on large cargo ships assigned to their prepositioning fleet, like the 50,000-ton Large, Medium-Speed Roll-On/Roll-Off and a 42,000-ton dry cargo mover called the T-AKE.

When the Marines landed an Osprey on an LMSR in 2012, Strock saw the possibilities. Connecting ships by Osprey, which serves as airlift for small Marine units, meant opening new options at sea to smaller task forces that don’t need the heft of an amphibious ship.

“We never imagined in our wildest dreams operating a V-22 off a supply ship,” he said. “But we did. The rest was history.”

The years since have seen further experiments, and several purpose-built ships have opened other possibilities. An Afloat Forward Staging Base adds a helicopter deck and built-in berthing to the mobile landing platform, a ship originally designed to swap gear between vessels at sea. Most closely resembling the Ponce in function, the AFSB will be able to bring Marines on or off via Osprey, making them ideal for small task forces or units.

The first of two AFSBs is under construction and expected to be operational by 2016, when it may replace the Ponce. Some Marine plans have suggested using an AFSB as a hub for anti-piracy missions off West Africa.

The Marines have also explored the Joint High Speed Vessel, an aluminum catamaran designed to quickly move several hundred people and their gear in noncombat environments. In an exercise last year, Marine Special Operations commandos launched missions from aboard a JHSV. Other concepts include humanitarian missions or movements of Marine teams designed to reinforce American diplomatic buildings overseas.

Experiments with the supply ships will continue for several more years, Strock said, as the Marines explore the possibilities. Marine Corps Commandant Gen. Joseph Dunford has already called for planning on how task forces in Spain and Australia could employ the ships.

Questions remain, including how Marines will work alongside civilian mariners, who are part of the Navy’s Military Sealift Command. The ships also don’t solve the problem of amphibious assault, some naval analysts say, even if they help ease the burden on the current fleet.

“I think the Marines are very happy with the direction the (mobile-landing platform) is going,” said Bryan McGrath, a naval consultant with the FerryBridge Group. “And I think they would tell you, and with iron-clad justification, that they are not amphibs.”