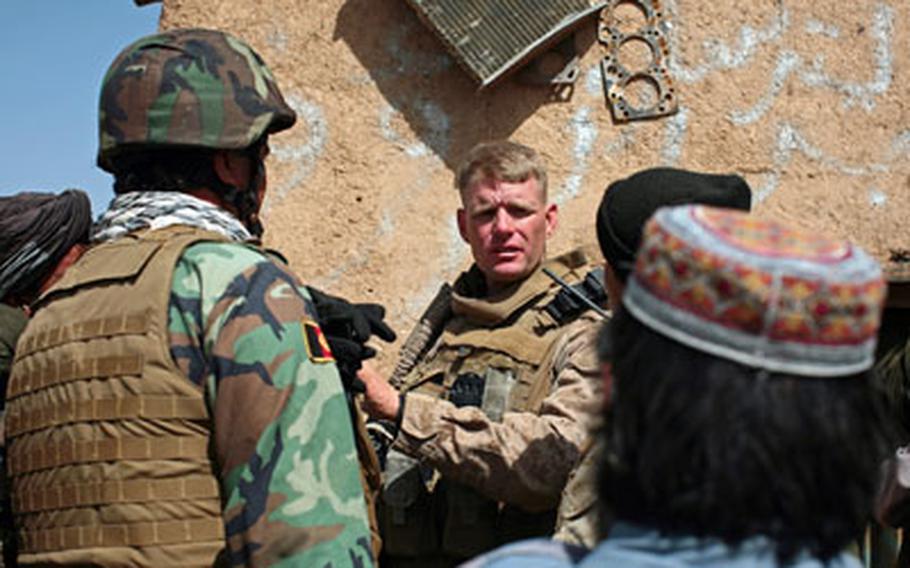 Buy Photo
Lt. Col. Brian Christmas, commander of 3rd Battalion, 6th Marine Regiment, listens to the concerns of a local villager through a translator in the village of Marjah, Afghanistan. (Drew Brown/Stars and Stripes)

Buy Photo
Lt. Col. Brian Christmas, commander of 3rd Battalion, 6th Marine Regiment, listens to the concerns of a local villager through a translator in the village of Marjah, Afghanistan. (Drew Brown/Stars and Stripes) 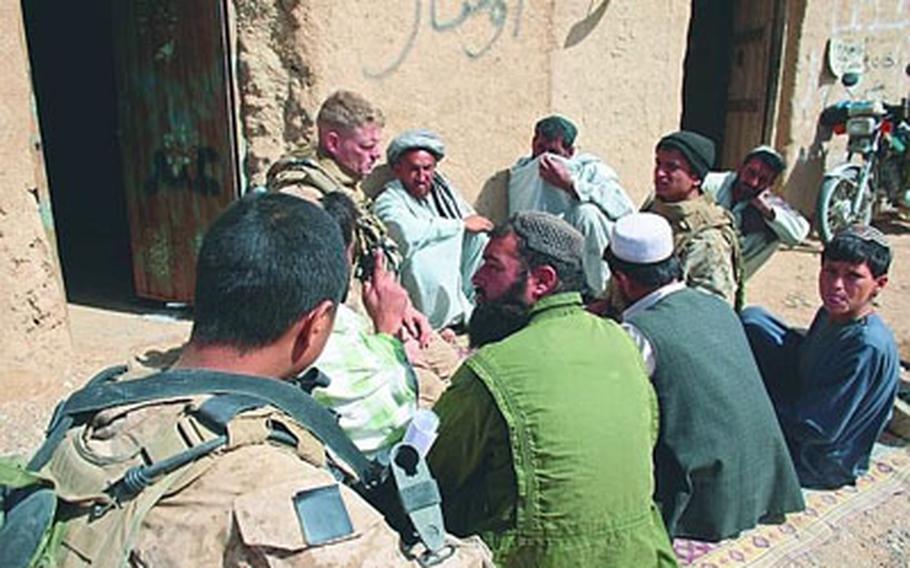 MARJAH, Afghanistan &#8212; Now that the shooting appears to be mostly over, Marines in this southern Taliban enclave are working to consolidate the gains they&#8217;ve made since the largest coalition offensive of the 8-year-old Afghan war began nearly three weeks ago.

The primary focus of U.S. forces now is to integrate Afghan police units back into the community, which had been under Taliban control for at least a year and a half. Marine officers are also meeting daily with village elders to assess the needs of the community and identify local leaders they can work with. They&#8217;re also putting unemployed local men to work on small clean-up projects to inject some quick cash into the community.

More than 5,000 U.S. troops, along with 2,000 Afghan soldiers, swept into Marjah on Feb. 12 at the beginning of Operation Moshtarak. So far, 12 Marines have been killed in the operation, four of them from the 3rd Battalion.

According to Marine officers, U.S. troops faced stiff resistance from dug-in Taliban fighters for the first few days of the operation, but then the Taliban melted away.

"We expected they were going to stand and fight for a while, then go to ground," said Maj. Billy Moore, executive officer for 3rd Battalion, 6th Marines. "It&#8217;s been a few days since we&#8217;ve had contact."

Until Thursday, more than a week had passed since Marines in northern Marjah had fired a shot in anger. Then a small group of Taliban fighters ambushed a U.S. patrol near a crossroads known as "Five Points." The Marines returned fire, and after a brief exchange, the Taliban dropped their weapons and fled. No Marines were killed or wounded in the engagement.

"We know the Taliban is out there among the population," said Maj. Lawrence Lowman, operations officer for 3rd Battalion, 6th Marines. "But it&#8217;s just a game of patience right now."

Even though the Taliban are steering clear of the running gunbattles that characterized the first few days of the operation, roadside bombs remain a constant threat.

Marines with 3rd Battalion have encountered more than 100 bombs since the operation began. Although some explosions have caused casualties, most have been found before they could explode.

"Right now, there are a lot of positives," Lowman said. "Lots of locals are pointing out IEDs and threat areas to us. But I wouldn&#8217;t say that they&#8217;ve totally shifted to our side yet."

Hundreds of villagers have attended three "shuras," or meetings with village elders to determine what kind of help the Afghans want. While some villagers have expressed a desire for assistance from the Marines, many are clearly still afraid of Taliban retribution.

Christmas said that during a recent meeting in the bazaar, only a few hundred yards from 3rd Battalion&#8217;s main base, villagers said they would like to get schools reopened. One man, a mechanic and electrician named Wali Muhammad, even stepped forward to tell Christmas that he would be willing to teach.

On Friday morning, Christmas met with Muhammad. Christmas said he was willing to provide money for Muhammad&#8217;s salary and for school supplies if they could get a school started immediately.

But by that point, Muhammad was backtracking, saying that everyone in the village wanted to reopen a school, "but until we have 100 percent security, we can&#8217;t do it."

Christmas countered that the Marines and Afghan police could provide the security that the villagers needed. But as the conversation progressed over the course of an hour and more local villagers joined in, several of them said that they were afraid the Taliban would kill them and their families if they cooperated. One man said the Taliban had already issued a written proclamation that warned anyone who received help from the Marines would be beheaded.

Christmas said he was willing to provide help discreetly, if that is what the villagers wanted. He also made it clear that he needed the villagers&#8217; help to root the Taliban out of Marjah.

"The problem is that the Taliban put their weapons down, and now they live among you," he said. "The only way for me to know who they are is for you to tell me."

The frightened Afghans were unwilling to take that step. But in the end, everyone agreed that they would meet again the next day to discuss renting a nearby building so that a school could be opened.