Buy Photo
Marines toss bottles of water dropped off by a supply convoy into empty Hesco barriers used to store supplies at Patrol Base Salaam Bazaar. Marines established the base May 16 by building a perimeter of Hesco barriers, wire and fabric baskets typically filled with rock and sand. By Thursday they had added a bunker and only the barest of amenities, including two outhouse stalls, tubes to urinate into, a space for showering and few tents. (Matt Millham/Stars and Stripes) 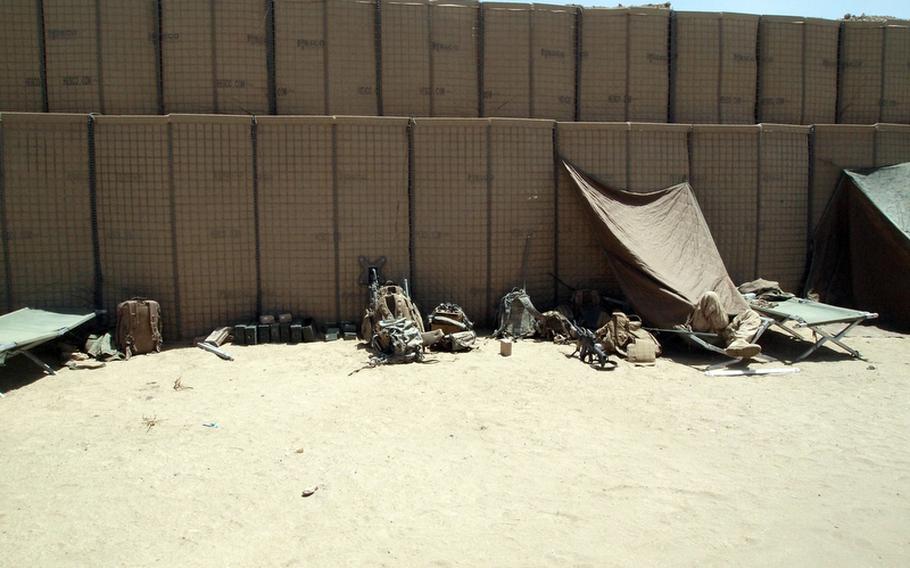 Buy Photo
A Marine takes a nap in the afternoon sun during a break from a work detail at Patrol Base Salaam Bazaar. Marines established the base May 16 by building a perimeter of Hesco barriers, wire and fabric baskets typically filled with rock and sand. By Thursday they had added a bunker and only the barest of amenities, including two outhouse stalls, tubes to urinate into, a space for showering and few tents. (Matt Millham/Stars and Stripes) Buy Photo
Marines are trying to clear this route, a major road connecting the district centers of Musa Qala and Now Zad in Helmand province, to allow safe passage for civilians and open commerce to Now Zad. Violence in Now Zad has ebbed, but this section of road through Musa Qala is riddled with improvised bombs laid by the Taliban, who have a strong presence in the district. This photo was taken through the back window of a Marine truck. (Matt Millham/Stars and Stripes)

PATROL BASE SALAAM BAZAAR, Afghanistan &mdash; Company L Marines weren&rsquo;t on the ground six hours when the welcome they&rsquo;d expected came screaming in. A barrage of heavy rounds, possibly from a recoilless rifle or mortar, slammed into the ring of not-yet-filled Hesco barriers that made up their new desert base.

That was May 16. A little more than a week later, Patrol Base Salaam Bazaar is still austere, but fully operational.

Situated along a strategic route that coalition forces are eager to wrest from Taliban control, the base will enable 3rd Battalion, 2nd Marine Regiment to shore up gains made in Now Zad, where most fighting has ceased, and connect that district&rsquo;s commercial and government center to that of neighboring Musa Qala and the rest of Helmand province.

The insurgents are fighting hard to keep that from happening. Locals don&rsquo;t yet appear supportive of the plan either.

That apparent lack of support likely stems from the Marines&rsquo; proximity to the illegal local bazaar after which their patrol base is named. The bazaar is a key market for the region&rsquo;s poppy crops, which are a major source of Taliban financing. Though illegal, poppies cover about half of Musa Qala&rsquo;s cultivated land and an even greater portion of neighboring Now Zad&rsquo;s.

As a Marine convoy sent to resupply the base rolled through a neighboring village Thursday, a boy on the side of the road, maybe 10 years old, held up an imaginary AK-47 and sprayed pretend hot lead.

The Taliban&rsquo;s response to the Marines&rsquo; presence has been far more malicious.

&ldquo;Every day, someone&rsquo;s taking contact,&rdquo; said Sgt. Philip Schrock, a Marine team leader. &ldquo;It&rsquo;s usually toward the evening, sometime after 1600; that&rsquo;s usually I guess [when] they&rsquo;re done farming. It&rsquo;s not too hot. That&rsquo;s when they like to come out.&rdquo;

Company L, which makes up the bulk of the force at the patrol base, lost two vehicles to roadside bombs in its first four days here. No Marines were hurt in either blast.

Five Marines were injured, however, in two indirect fire attacks on the base.

&ldquo;I wouldn&rsquo;t be surprised if it happened again, but we have pretty good defense here,&rdquo; said Sgt. Peter Melcon. Though he was among those wounded &mdash; he took shrapnel to the arm and leg &mdash; he said he&rsquo;s &ldquo;not really concerned&rdquo; about the possibility of more attacks. The base now has a system to warn of incoming fire, and &ldquo;we&rsquo;re doing other things to make sure that they&rsquo;re not dialing in on us,&rdquo; he said.

So far, insurgent fighters have avoided sustained gun battles with the Marines, who know they will win any sustained engagement.

&ldquo;The enemy has not really wanted to come out and face us head on,&rdquo; Daunhauer said. Instead, they use hit-and-run tactics, taking &ldquo;a few pot-shots here and there.&rdquo;

The Marines have been more effective in their assaults on the enemy. Snipers attached to the company killed at least five insurgents in their first four days at the patrol base, according to one sniper, who can&rsquo;t be named in accordance with International Security Assistance Force rules. Another insurgent who attacked Marines and tried to flee was gunned down by a coalition tank.

While they are bent on going after the insurgents, the Marines haven&rsquo;t yet entered one known Taliban stronghold: the Salaam Bazaar.

&ldquo;They say it&rsquo;s laced with [improvised explosive devices],&rdquo; said Schrock. &ldquo;We&rsquo;ve had eyes on it the past couple days. A lot of it looks like bad guys in there, but you can&rsquo;t really tell.&rdquo;

Daunhauer said that while the bomb threat in the bazaar is a concern, the Marines don&rsquo;t want to give locals the impression that they are there to destroy the bazaar. &ldquo;We want to make the bazaar an actual running, legit bazaar&rdquo; that pays taxes to the government, Daunhauer said.

But the main thing, he said, is to &ldquo;let the insurgents know that this is our area and that we&rsquo;re gonna open this [road] up.&rdquo;