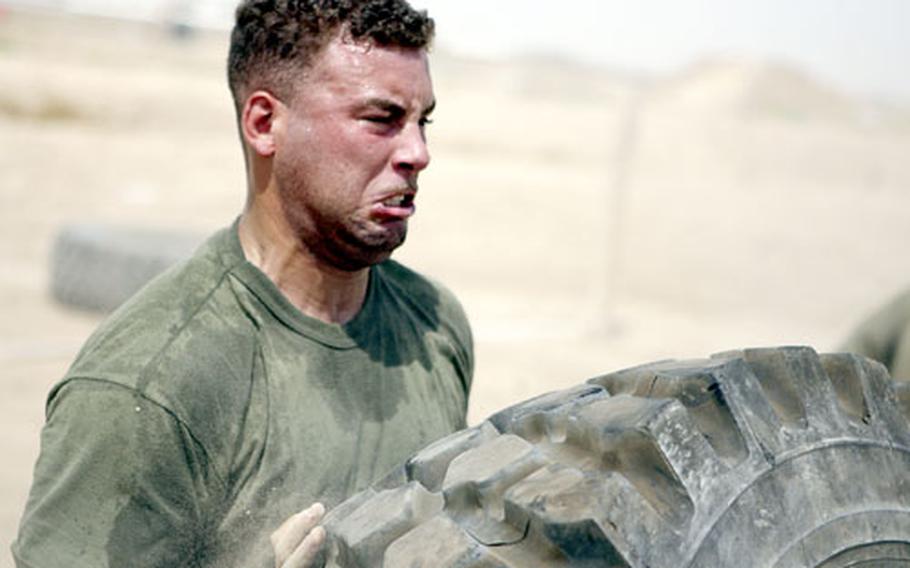 ARLINGTON, Va. &#8212; The Marine Corps is looking to emphasize physical training that replicates what Marines do in combat, officials said.

Toward that end, the Corps plans to send out a survey early next year to Marines asking them about their attitudes and perception of physical training since 2001, officials said.

The Marine Corps Times first reported that the Corps was looking into a new concept for physical training.

Current Marine physical fitness programs can overemphasize long-distance running at the expense of strength training, according to a presentation from the Marine Corps Warfighting Laboratory.

As a result, the Corps is looking into &#8220;functional fitness,&#8221; which targets specific muscle groups that Marines will need to do their jobs, officials said.

&#8220;Most of the movements associated with the Functional Fitness Program, since they imitate combat function, can be performed with a filled sandbag, a rock, a filled 5-gallon water jug, a tire, or an ammo can filled with sand,&#8221; the presentation says.

And instead of doing abdominal exercises on the ground, artillerymen could use their feet as well in such exercises, said Lt. Col. Brian McGuire, of Training and Education Command.

&#8220;Though endurance is critically important for a Marine&#8217;s fitness, experience in recent combat operations has reinforced the idea that short, fast runs, normally under heavy load, are more the norm than long, endurance-type runs,&#8221; the presentation on functional fitness training says.

Some Marines are already training with heavier loads by wearing their body armor while working out, McGuire said.

Marine officials have not developed a timeline for when functional fitness training might be phased in, said Lt. Col. Lance McDaniel, of the warfighting laboratory&#8217;s Concepts and Plans Division.

McDaniel said the Corps is looking into whether it would have to change the Physical Fitness Test if it adopts the functional fitness concept.

But three Marine companies, each with 250 Marines, have already undergone such functional training at the Marine Corps Basic School, of which about 200 Marines per company showed improvement on the Physical Fitness Tests, Shusko said.

The Corps presentation says Marines may initially find the higher-intensity workouts that come with functional fitness more challenging than what they have been accustomed to, but the training will ultimately increase their endurance, speed, coordination and core strength.