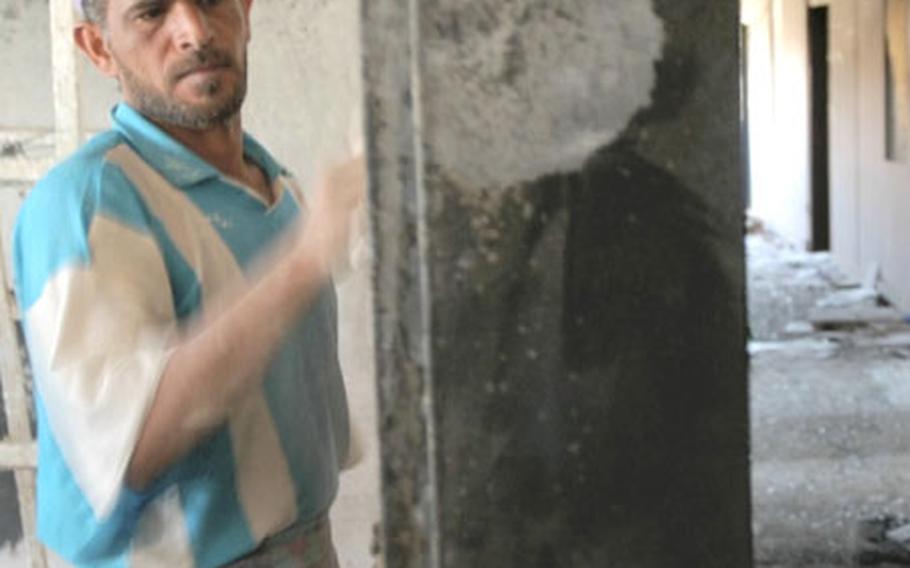 A local Iraqi contractor strips the walls of a biology laboratory at Al-Qadisiyah University in Diwaniyah, Iraq, in May to prep them for painting. (Courtesy of U.S. Marines)

A local Iraqi contractor strips the walls of a biology laboratory at Al-Qadisiyah University in Diwaniyah, Iraq, in May to prep them for painting. (Courtesy of U.S. Marines) 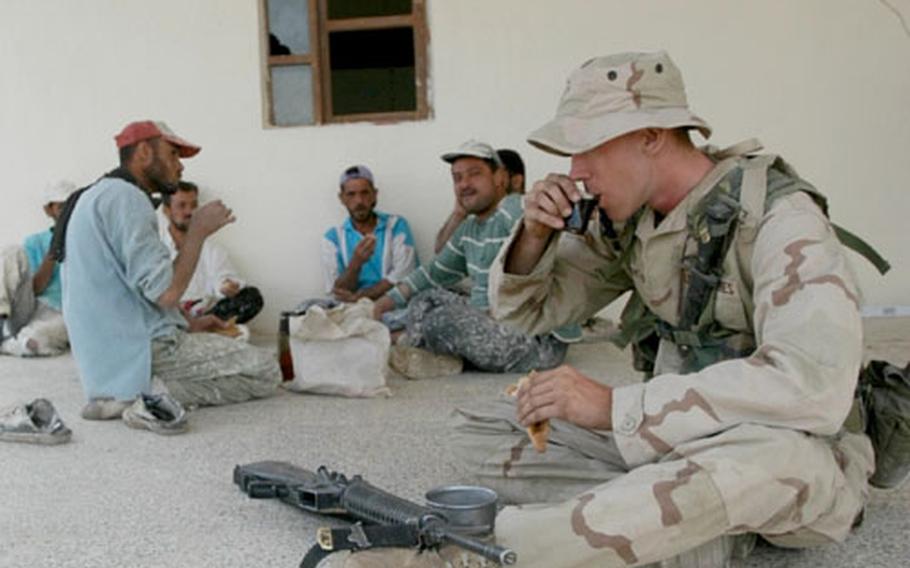 DIWANIYAH, Iraq &#8212; When looters stripped many of the cities and towns in the Qadisiyah province in southern Iraq after the fall of Saddam Hussein&#8217;s regime, they also hit one of the largest science and technology colleges in the country.

Thieves carried off computers and furniture, then light and water fixtures, doors and pipes from the Al-Qadisiyah University. They torched most of the books and many of the buildings belonging to the university, which has about 11,000 students and faculty members at its main and satellite campuses.

&#8220;There were people in donkey carts leaving here loaded up with desks, fixtures,&#8221; said Col. Darrell Moore, chief of staff for the 1st Force Service Support Group for the 1st Marine Division. He is a reservist from Pryor, Okla., and one of the first U.S. Marines to arrive at the university.

The Marines found two feet of ash scattered across the library and everything not nailed down was gone.

&#8220;There was not one door hanging,&#8221; said Lt. Col. Emilio Rovira, who oversaw the engineering platoons that helped repair the university. About 2,000 air conditioners vanished. Even pieces of motors that operated water pumps disappeared.

When the Marines were looking for a site out of the desert for a temporary headquarters, the university buildings beckoned.

Armed with money captured by coalition forces, and with the blessing of Brig. Gen. Edward Usher, commander of the service support group, Moore and Rovira drafted a reconstruction plan to replace windows and screens, add electricity and fixtures, and repair and paint walls.

The project used local labor, putting money in the pockets of 250 workers. The Marines hired a general contractor who hired six subcontractors.

The initial 30-day project was doubled and more work added. They replaced 80 percent of the windows on the campus, repaired, rebuilt and repainted hundreds of walls.

The work was extensive &#8212; laborers passed through intense security each morning before working 16-hour days every day, Rovira said.

About 30 buildings, including the library and mosque, were repaired. Doors and windows and, later, light fixtures gradually appeared, while fans and air-conditioning units began cooling rooms and corridors.

Iraqi-born American Mark Shaouna, a Department of Defense employee from San Diego, bridged the gap between the engineers and the laborers.

His job was to make sure the workers understood the way Marines operate and to explain why such strong security was necessary.

The project fostered good will between the workers and the Marines assigned to guard them. The two groups played soccer, shared lunches and learned one another&#8217;s names, Visina said.

The security platoon swapped out after several weeks, and when they left, &#8220;there were actually some tears,&#8221; Visina said.

There were also cultural differences for both sides to deal with. Laborers weren&#8217;t used to female officers being in charge. And the planners had to take into consideration different cultural norms like toilet styles and the placement of faucets.

After a few weeks, the service support headquarters moved back to Kuwait, leaving behind a detachment of Marines and soldiers. But the Marines promised to return for the fall semester.

The university staff had mixed feelings at first.

&#8220;They were heartbroken when they first came back here because of all the looting,&#8221; Moore said. But they didn&#8217;t want to give up their university to the Americans or delay the summer semester.

Through some negotiations, the faculty found a temporary home and the Marines provided help, like 130 chairs for the veterinarian school.

The project wrapped up in late June with a small ceremony.

The university will be ready in time for the fall semester, with help from other civil military units, but the repairs aren&#8217;t complete.