Marines living ‘outside the wire’ on Syrian border see progress 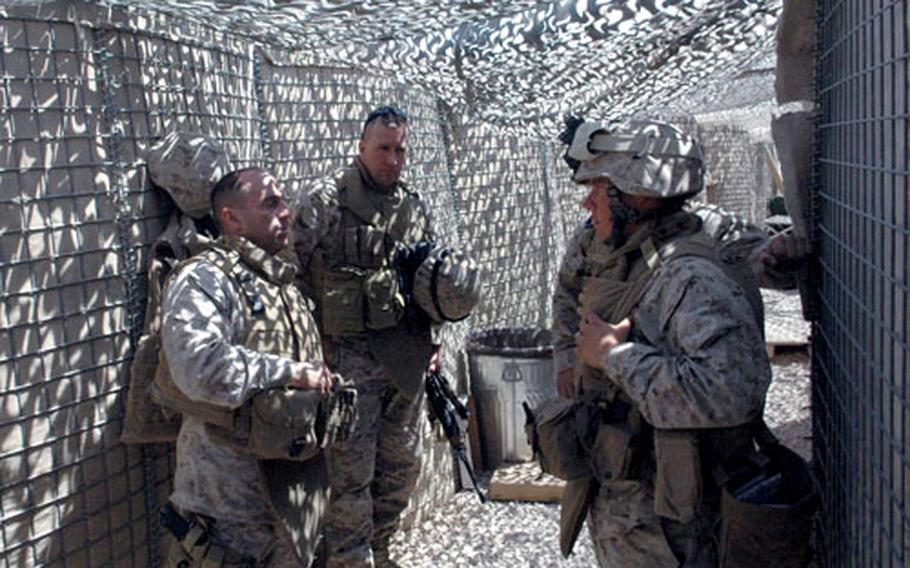 Lt. Col. Nick Marano, far left, checks in with his Marines and their Spartan living conditions at a new patrol base set up in April. It is one of 15 spread out across Marano’s battle space. (Andrew Tilghman / S&S)

Lt. Col. Nick Marano, far left, checks in with his Marines and their Spartan living conditions at a new patrol base set up in April. It is one of 15 spread out across Marano’s battle space. (Andrew Tilghman / S&S) 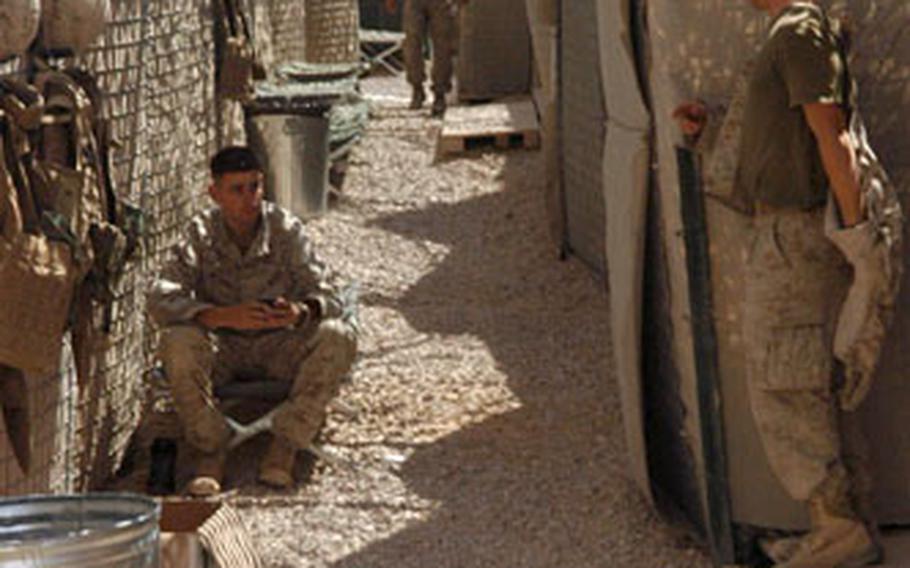 Marines rest in the shade at a patrol base — known as BP Vera Cruz — set up in April, one of the latest in a network that spreads across Al Anbar province. (Andrew Tilghman / S&S)

OBEIDI, Iraq &#8212; One month ago, out in the far western corner of Iraq, the Marines set up a new forward operating base. Navy Seabees wired it for electricity. Air conditioners were installed. And a platoon of Marines moved into the desert encampment.

It was the latest of 15 small camps &#8212; mostly manned by a platoon of Marines &#8212; that are dotted among the villages and desert roads near the Syrian border.

A year ago, most of the Marines here were living inside nearby Camp Al Qaim, but today, the vast majority of the 1st Battalion, 7th Marines live &#8220;outside the wire,&#8221; inside vacant homes, abandon school houses or other so-called Firm Bases.

Like traditional neighborhood beat cops, the Marines now focus on foot patrols and cultivating support among locals, securing the towns and villages block by block and aiming to prevent insurgents from gaining even the smallest foothold.

Marano articulates a strategy that the Marines employ up and down Euphrates Valley, where the number of Marines bases has increased exponentially during the past year.

The large American bases in places like Fallujah, Haditha and Al Qaim are now serving as the logistics center for a hub-and-spoke network of bases that reach out into the cities, villages and farmland where insurgents had operated openly.

The method runs counter to the strategy employed by many U.S. Army units elsewhere in Iraq, where commanders are closing down smaller bases in an effort to &#8220;reduce the footprint&#8221; and consolidate U.S. forces on a few large bases.

Yet Marine commanders say their strategy is essential to winning a fight in Anbar province, where a relatively small population is spread out along a green ribbon of arable land that spans a 200-mile-stretch from Fallujah to the Syrian border.

&#8220;The sheer tyranny of distance out here requires a decentralized fight. You have to be where the people are. Sitting on a huge base like Al Asad gets you nothing,&#8221; Lt. Col Robert Jones, the executive officer for Regimental Combat Team 7, said from his office at Camp Al Asad.

The strategy is not a new one &#8212; just carrying it out is. After more than two years in Anbar, the Marines are finally putting into place their original plans for the region.

Those plans were stalled in 2004, when the full-blown uprising in Fallujah demanded a large-scale attack on the city, draining troop levels in the rest of the region, Jones said.

&#8220;But then you had the battle of Fallujah and it pulled us away from these population centers in order to focus on Fallujah.&#8221;

Many Army officers are planning for declining troop levels and closing bases, in part because they do not want the Iraqi government and security forces to become too reliant on American assistance.

But the Marines say their fight in Anbar is still fierce and the Iraqis&#8217; training remains limited, making the current, aggressive approach the best option.

&#8220;It doesn&#8217;t foster dependency, it allows them to ride with some training wheels before you totally let go,&#8221; said Lt. Col Larry White, who heads a civil military operations office in Al Qaim.

&#8220;The Iraqi police and the Iraqi army cannot take the lead if they are getting whacked every day.&#8221;

Or, as one Marine intelligence officer said: &#8220;You have to reduce the insurgency before you can reduce the footprint.&#8221;

Attacks in the Al Qaim area have dropped significantly during the past six months, when the initial network of bases was set up and the Marines moved to a more neighborhood-based strategy.