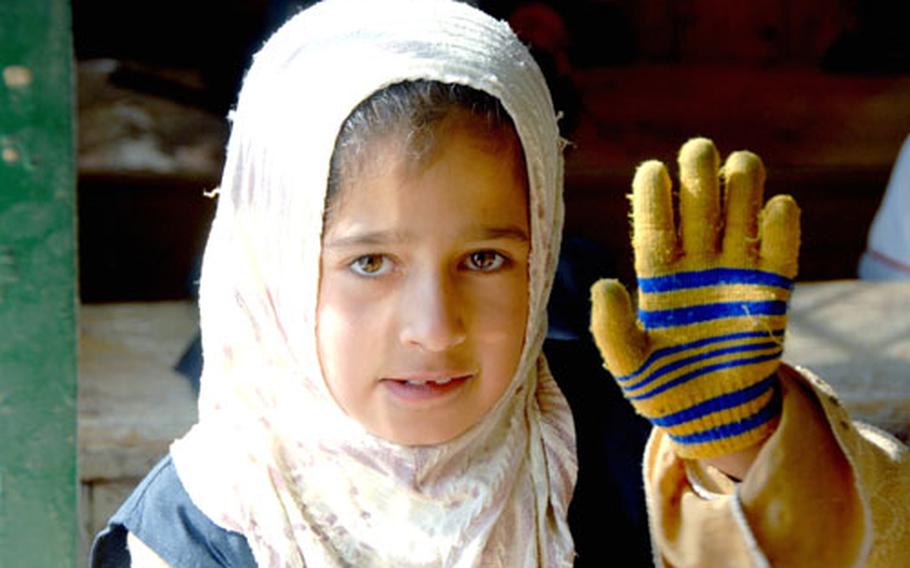 An Iraqi schoolgirl waves at the camera during class at the primary school adopted by 9th Engineer Support Battalion. There is no power in the building, so most of the children wear tattered gloves and hats to stay warm during their lessons. The Marines plan to hook up a generator so the school can have heat. (Megan McCloskey / S&S)

An Iraqi schoolgirl waves at the camera during class at the primary school adopted by 9th Engineer Support Battalion. There is no power in the building, so most of the children wear tattered gloves and hats to stay warm during their lessons. The Marines plan to hook up a generator so the school can have heat. (Megan McCloskey / S&S) 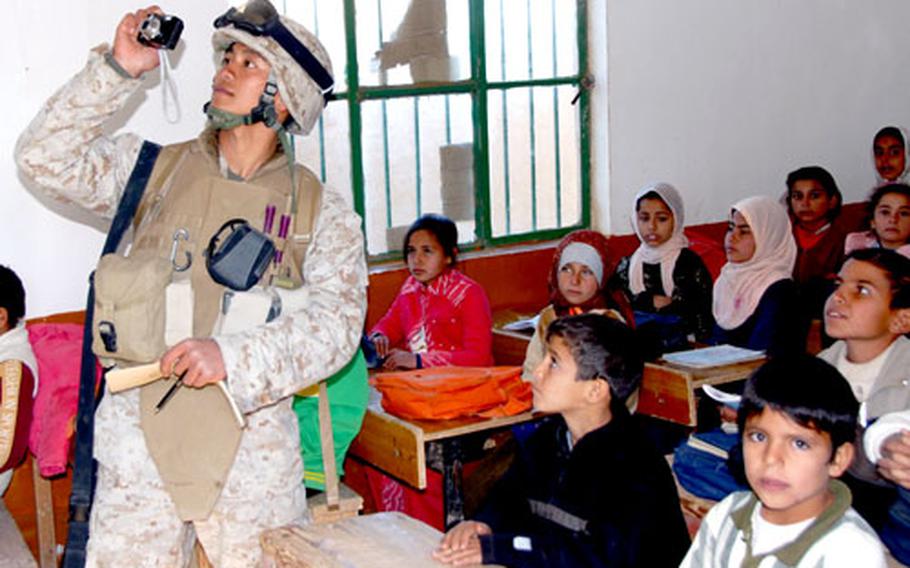 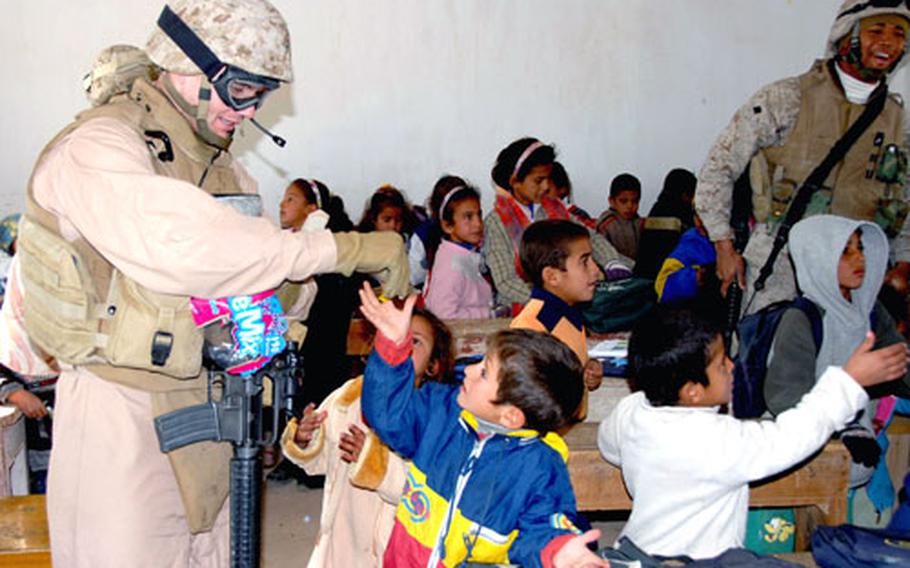 Marine Gunnery Sgt. Steven Burkett, left, tries to hand out candy in an orderly fashion — one piece at a time — as Lance Cpl. An&#39;Tion Aikins smiles at the kids. "Sometimes you don&#39;t realize the impact you&#39;re making, but at the school you could see it on their faces," Burkett said. The system soon broke down when some of the older boys from the neighborhood — who are too old for the primary school — took one of the candy boxes and started throwing handfuls to the class. (Megan McCloskey / S&S) Lance Cpl. Anna Perez lifts an Iraqi schoolchild away from the candy box on the floor after candy chaos broke out in the classroom. The excited children couldn&#39;t get enough. The 9th Engineer Support Battalion Marines will be making regular stops at the primary school to do improvement projects. On Tuesday they dropped off newly built wooden desks and soccer goals. Next, they&#39;ll tackle the electricity. (Megan McCloskey / S&S)

CAMP TAQADDUM, Iraq &#8212; Through a bright teal gate that stands out against the monochrome, dusty landscape sits a little school.

It&#8217;s a horseshoe-shaped building with a small concrete courtyard in the center. Off to the side an empty dirt lot substitutes for a soccer field. Two rocks on each end mark the goals.

The tiny classrooms lack heat, so many of the young Iraqi children wear tattered gloves and hats during their lessons. There&#8217;s little elbow room for them, packed three to a desk.

The school is in a small town between Ramadi and Fallujah, an area of Anbar province patrolled by Company A, 2-136 Combined Arms Battalion, 34th Infantry, a National Guard unit out of Minnesota.

To help improve daily life &#8212; and therefore, hopefully, improve the security situation &#8212; company commander Capt. Adam Gilbertson said he put the word out to other units asking for volunteers to adopt schools.

The Marines with 9th ESB jumped at the chance.

In the days before Christmas, 9th ESB&#8217;s Company B Marines built 20 wooden desks for the classrooms and two soccer goals to replace the rocks.

And grander plans are in the works.

On Tuesday, the Marines dropped off the desks and soccer goals. The convoy, which went out with the National Guard soldiers, was immediately greeted by smiling children in search of sweets. The kids were persistent and relentless, hounding each Marine and soldier for candy, pencils and paper.

Lance Cpl. Evan Keller, 20, got the kids stirred up by taking their photo and then showing them their image on his digital camera. The kids were real hams, posing with funny faces and jostling for camera time.

Most of the Marines seemed to be as excited to be there as the kids were to have them.

Projects such as adopting a local school probably wouldn&#8217;t have been considered two or three years ago, but it&#8217;s the natural progression of improving the security situation, Maj. Patrick Hittle, battalion executive officer, said.

During Tuesday&#8217;s visit to the school, the Marines surveyed the electrical situation, which Maj. Mark Boone, Company B commander, labeled atrocious. The building has no power and the wiring is a mess.

Boone spent most the visit talking with the headmaster about the improvements he&#8217;d like to see.

First up is addressing the electrical problems. Hooking up a generator is normally a temporary fix, Boone said, but it was the first solution the headmaster threw out because it would be easy to get fuel to keep it going.

Boone said improving the windows so the building is warmer and adding classrooms are some of the things the Marines might do.

Possible projects were discussed through a translator Tuesday, but the last thing the school&#8217;s headmaster said to Boone was in English.