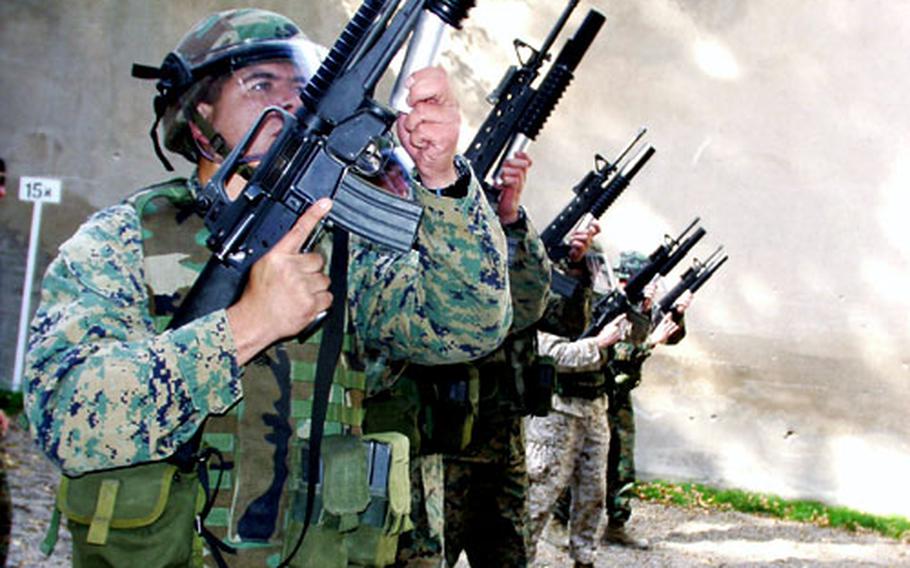 STUTTGART, Germany &#8212; Marines are taught to kill soon after they become Marines.

Some, though, are currently in Stuttgart learning nonlethal ways to do their jobs.

&#8220;If we were going up against rioters or even peaceful demonstrators, we&#8217;d have a way to disperse the crowd without having to use lethal force on them,&#8221; said Sgt. Scott Hill of U.S. Marine Corps Forces Europe, one of 14 Marines taking two weeks of Nonlethal Weapons Training at Panzer Casern.

Nonlethal munitions, such as rubber and foam bullets and sting-ball grenades, are available for use right now in Iraq, according to Staff Sgt. David Smith, an instructor with the 2nd Special Operations Training Group, 2nd Marine Expeditionary Force from Camp Lejeune, N.C.

The situation in Iraq might currently be too threatening for U.S. troops to use anything other than real bullets, Smith said. But he said nonlethal weapons could eventually play an increasing role in helping troops control crowds wherever it&#8217;s needed.

Nonlethal force, the Marines are being taught, is a better option to use in some situations: to keep people away during rescues or evacuations, to help local police quell out-of-control riots and demonstrations and to enforce keep-out zones.

Smith, of Springfield, Ohio, told about a humanitarian mission in Somalia when the crowd rushed a food giveaway site.

Hill, of Chesterland, Ohio, said that two years ago when the 4th Marine Expeditionary Brigade reopened the U.S. Embassy in Kabul, Afghanistan, he might have felt more comfortable having nonlethal munitions available.

Nothing happened as the Marines were escorting the Afghan workers around the compound, Hill said, but nonlethal weaponry &#8220;could have been useful.&#8221;

The nonlethal munitions included beanbags, foam and rubber slugs, and rubber balls that are fired like buckshot. All are fired by Mossberg 590-model 12-gauge shotguns or from grenade launchers attached to the Marines&#8217; M-16 rifles.

There also are hand-thrown grenades that shoot eraser-size rubber &#8220;sting-balls&#8221; when they detonate.

The munitions aren&#8217;t for sharpshooters; their effective ranges are usually closer than 50 meters.

The Marines are being taught the course so they can turn around and train their units. Ten of the students were from MARFOREUR; four made the trip from U.S. Marine Corps Security Forces in Rota, Spain.

Among the topics: the effective range of the different weapons; circumstances when the nonlethal weapons could actually kill someone; and which munitions are appropriate for different situations.

Maj. Shannon Geaney of Long Beach, Calif., and MARFOREUR, said nonlethal weapons are for &#8220;military operations other than war.&#8221;