Marines learn how to win over Afghan town with aid, respect, sensitivity 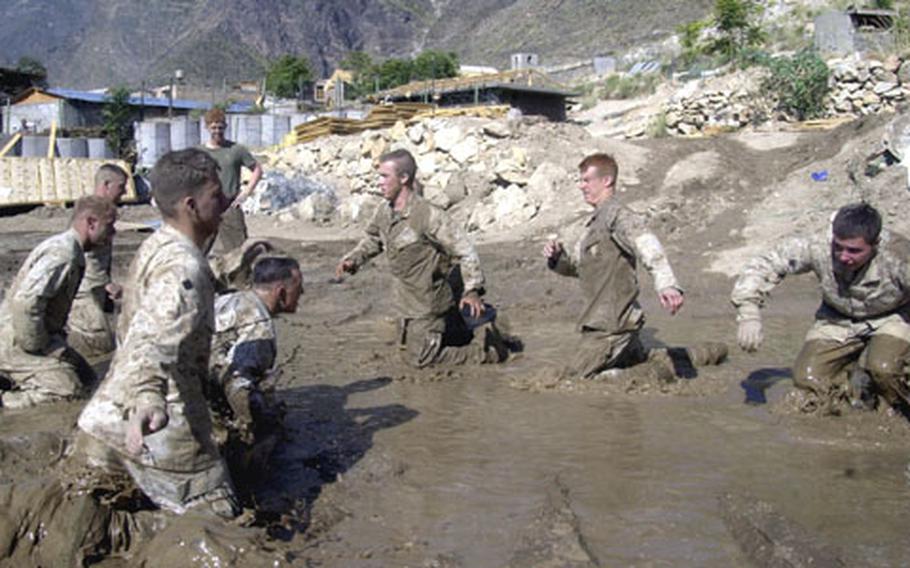 U.S. Marines at Camp Blessing in eastern Afghanistan charge each other Friday morning in their final test for gray belt certification in the Marine Corps Martial Arts Program. The Marines spent the morning going through nine physically demanding stations, including one where they grappled against an instructor. (Steve Mraz / S&S)

U.S. Marines at Camp Blessing in eastern Afghanistan charge each other Friday morning in their final test for gray belt certification in the Marine Corps Martial Arts Program. The Marines spent the morning going through nine physically demanding stations, including one where they grappled against an instructor. (Steve Mraz / S&S) 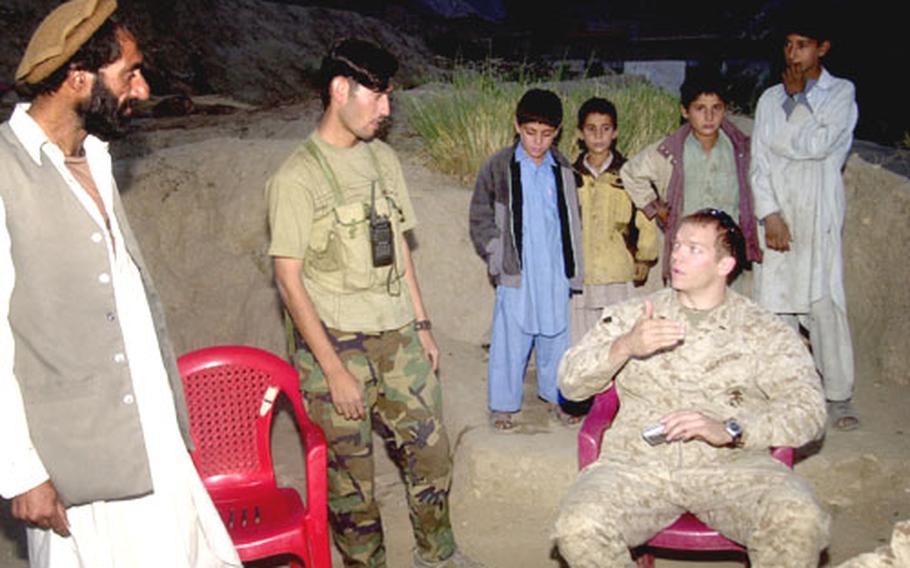 Marine 1st Lt. Matt Bartels, commander of Camp Blessing, right, talks with an Afghan Security Forces troop and a villager Thursday evening outside the camp in eastern Afghanistan&#39;s Kunar province. Solid relationships with local Afghans have led to the seizure of thousands of pounds of enemy ordnance since the Marines arrived at Blessing in June. (Steve Mraz / S&S) 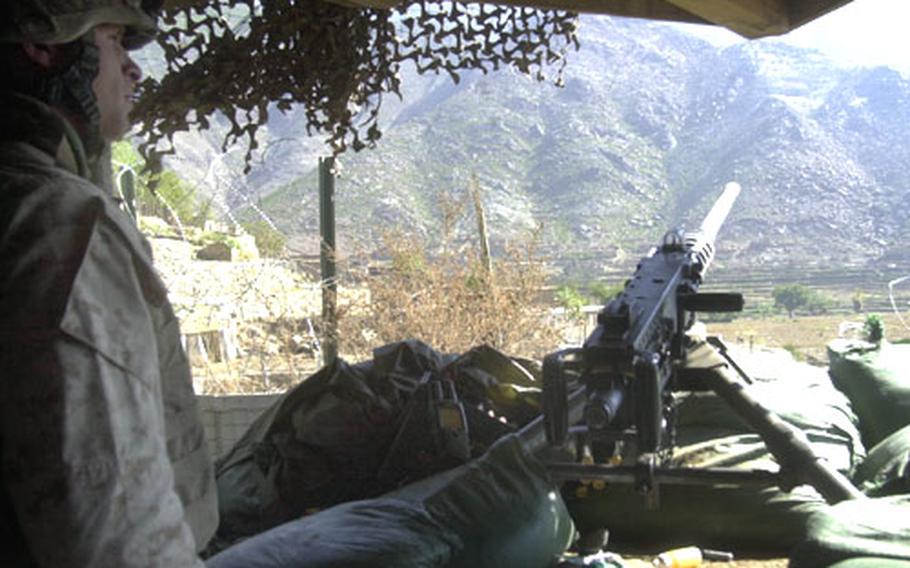 CAMP BLESSING, Afghanistan &#8212; Just steps outside the gate of this eastern Afghanistan fire base, camp commander 1st Lt. Matt Bartels is met with a warm smile, a hug and a handshake, followed by the Afghan villager respectfully placing his hand over his own heart.

Such heartfelt greetings are not bestowed on many U.S. Marines by Afghans, but Bartels and the 84 other Marines at this small, remote base have established strong bonds with the locals.

Since arriving at Camp Blessing in early June, the members of the 3rd Marine Division&#8217;s Company E, 2nd Battalion, 3rd Marine Regiment from Kaneohe Bay, Hawaii, have earned the respect of the locals through self-initiated humanitarian aid giveaways, respectful treatment of the people and sensitivity to their culture.

And the Marines at Blessing are reaping the benefits.

Intelligence gathered from local sources has resulted in the Marines and Afghan Security Forces troops stationed here uncovering 29 enemy weapon caches. More than 10,000 pounds of ordnance, including 600 rounds of 82 mm mortar rounds and 200 rocket-propelled grenades have been seized.

It is work typically performed by mystery-shrouded Army Special Forces or other Defense Department agencies, but the Marines here take on the role as part of their mission.

So how do the Marines at Blessing &#8212; currently only one platoon with attachments &#8212; glean so much valuable information from the locals?

When someone comes to the camp to provide information, Marines first brew local tea, strike up a friendly conversation and then get down to business.

Bartels, whose parents were in the Peace Corps, experienced what life is like for the locals when he refrained from eating or drinking during daylight hours for a week during the Muslim holy month of Ramadan.

Bartels spends as much time with the locals as he can. Some days he heads into the village adjacent to the camp at 8 a.m. and doesn&#8217;t return until 4 p.m.

Marines here use their personal money to help the Afghans when they need it. The Marines have orchestrated humanitarian aid giveaways with items and money donated by U.S. citizens, churches and community groups. About 50 percent of the mail delivered to Camp Blessing contains items for Afghan kids, Bartels said. The troops here were able to supply $5,000 worth of school uniforms to local children.

During one of the roughly 20 indirect-fire attacks against Blessing since June, an enemy round damaged an Afghan shop just outside the camp. The day following the nighttime attack, Marines were at the shop with materials so it could be repaired.

When asked, Kinser said the Marines&#8217; top achievement at Blessing has been establishing a relationship with the locals.

And Bartels was doing his job Wednesday morning when the Afghan National Police chief at the village outside the camp asked him about getting another battery for a radio.

Bartels told the man to give him a week. The chief replied, through an interpreter, that he could last a month with his current battery.

The chief said something and then looked a bit downtrodden.

Constant state of alert in Kunar

The Marines at Camp Blessing have uncovered the most weapon caches, taken the most enemy indirect-fire attacks inside their camp and killed the most enemy of any unit from the 3rd Marine Division&#8217;s 2nd Battalion, 3rd Marine Regiment, during its deployment in Afghanistan.

They have also lost three Marines and given out 14 Purple Hearts since arriving at the camp in June.

Cpl. Andrew Lowe, 21, of San Diego, was just feet away from the incoming mortar round that took the life of one of those three &#8212; Lance Cpl. Steven Valdez &#8212; this September.

A week before the attack, Afghan contractors had constructed a flag pole for the base. Initially, the pole was supposed to be a small structure, but the Afghans built a larger-than-expected base for it.

During the attack when the round struck, a lot of the shrapnel hit the flag pole structure instead of nearby Marines.

Lowe was temporarily deafened by the blast and was so close to the explosion that smoke steamed out from underneath his helmet.

The Marines have weathered the adversity with only two officers at the small fire base, which can be traversed in about five minutes.

&#8220;Our success, for being so small, is a result of being able to establish good relationships with the locals.&#8221;