Marines issue order to open all combat jobs to women 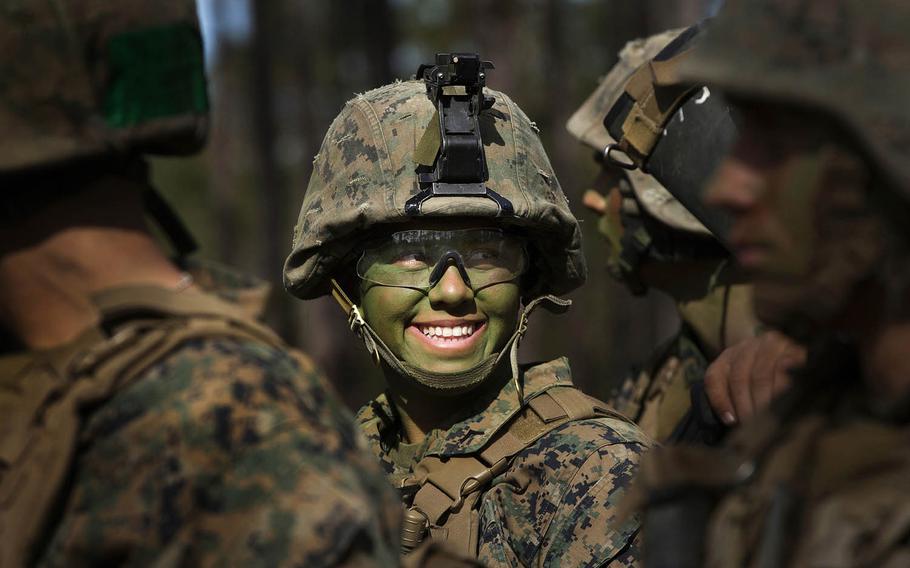 Pfc. Christina Fuentes Montenegro, of Coral Springs, Fla., and other Marines from Delta Company, Infantry Training Battalion, School of Infantry-East, receive final instructions prior to assaulting an objective during the Infantry Integrated Field Training Exercise aboard Camp Geiger, N.C., Nov. 15, 2013. Montenegro was of the first three female Marines to graduate infantry training with the battalion as part of integration study conducted by the service. (Paul Mancuso/U.S. Marine Corps)

The Marine Corps officially opened its infantry ranks to women Tuesday by issuing an administrative order intended to facilitate their integration into all combat jobs by April 1.

The change means female Marines who have already successfully completed infantry training and related job school for combat weapons are eligible for the “ground combat arms” occupational specialty, which clears the way for them to request lateral moves into formerly closed jobs.

Defense Secretary Ash Carter announced last month that women in any service will no longer be barred from combat positions based on their gender. The decision opened the remaining 10 percent of military positions to women — roughly 220,000 jobs, including those in elite units such as the Army’s Delta Force and the Navy SEALs.

The Marines was the only service that sought to keep some combat jobs closed to women. While serving as Marine Corps commandant, Gen. Joseph Dunford, now chairman of the Joint Chiefs of Staff, argued that women should be kept off the frontlines because mixed-gender units weren’t as capable as all-male units.

“Our Marines earned this. They volunteered, worked hard, completed the training and earned these [military occupational specialties],” he said. “Given the secretary of defense’s decision last month, we now have the authority to award those qualified Marines the additional [military occupational specialties], and we’ll continue to keep faith with them. Marines who are eligible and interested can now request to serve in those previously closed jobs.”

Dozens of women completed the Marines’ infantry training in the past two years as part of an integration study conducted by the service, and they would be eligible for the infantry job specialty under the announced opening.

In the statement, Sgt. Maj. Ronald L. Green commended the women who participated in the study for their dedication in helping the Marines “develop a well-planned and responsible integration process that ensures the Marine Corps remains prepared to answer our nation’s call, while reinforcing our standards and core values.”

The issue of combat training standards to be used for women, however, remains contentious.

Speaking to reporters at the Pentagon last week, Marine Corps Gen. John F. Kelly, commander of U.S. Southern Command, said his “greatest fear” was that the military over time would be pressured into lowering physical standards for women entering combat jobs.