Marines in Ramadi sweep to see and be seen 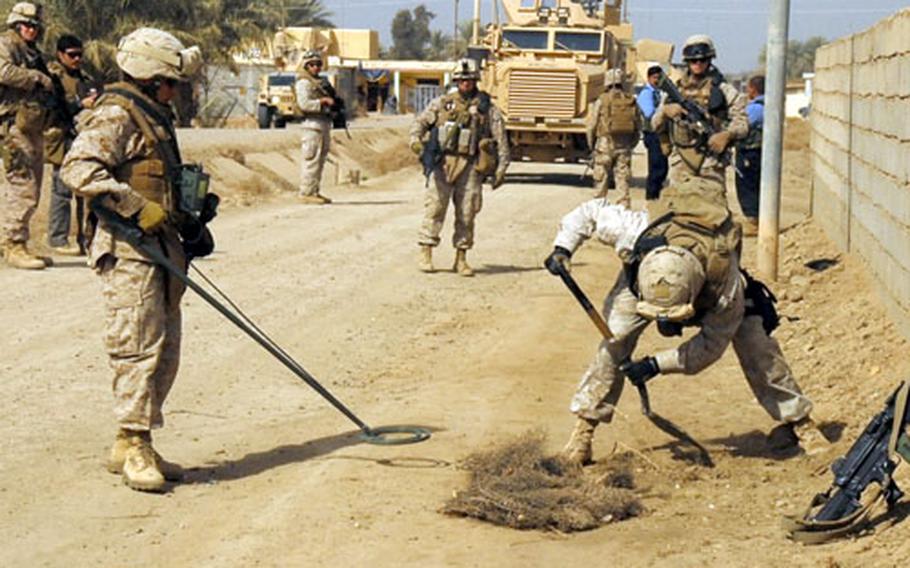 Cpl. Benjamin Riddle digs at a spot where the mine detector held by Lance Cpl. Erik Santos indicated there was metal. He found a crushed Pepsi can under the dirt, but no weapons. The Marines found no weapons during their cache sweep in Ramadi, but said their presence would deter insurgents from hiding weapons in the area. (Ashley Rowland / S&S)

Cpl. Benjamin Riddle digs at a spot where the mine detector held by Lance Cpl. Erik Santos indicated there was metal. He found a crushed Pepsi can under the dirt, but no weapons. The Marines found no weapons during their cache sweep in Ramadi, but said their presence would deter insurgents from hiding weapons in the area. (Ashley Rowland / S&S) 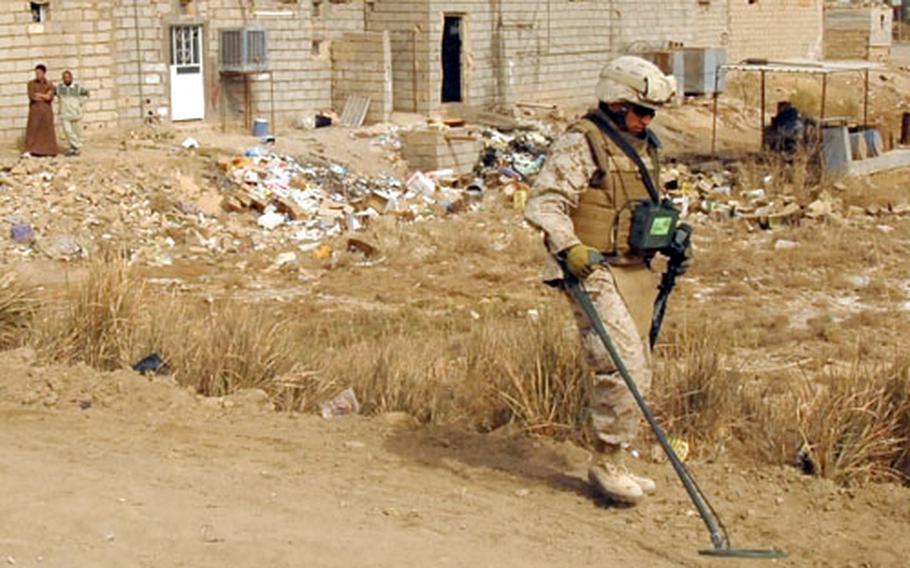 Lance Cpl. Erik Santos sweeps the side of a road for hidden weapons during a cache sweep in Ramadi. (Ashley Rowland / S&S) 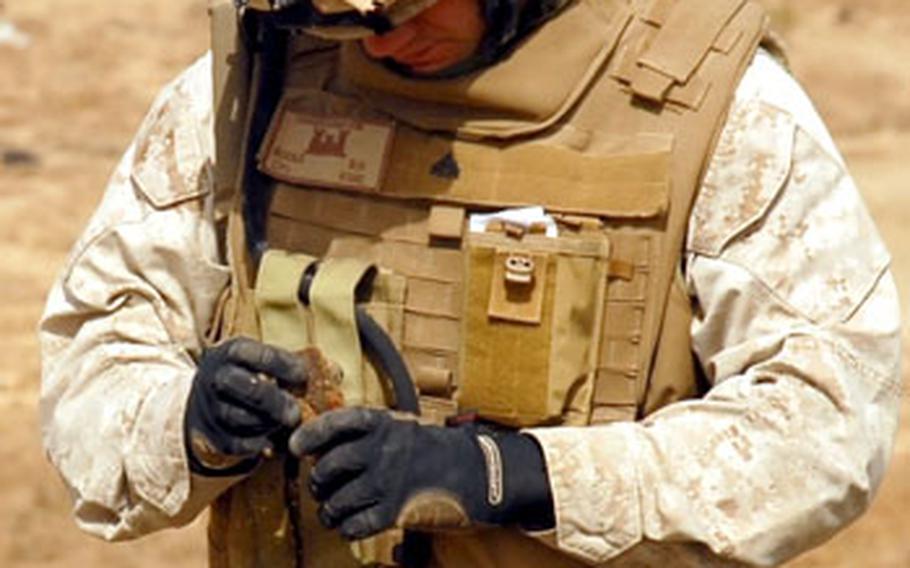 Cpl. Benjamin Riddle examines a metal object he found buried under the dirt during a weapons sweep. It was an engine part. The Marines of Golf Company, 2nd Battalion, 9th Marines, found no caches during their sweep. (Ashley Rowland / S&S)

RAMADI, Iraq &#8212; Cpl. Benjamin Riddle pulled a rusted tube of metal about the size and shape of a cardboard toilet paper roll from the ground. He put down his shovel, brushed the dirt off the tube and turned it over in his hands.

"Here&#8217;s your hit," he told minesweeper Lance Cpl. Erik Santos, and held up their find: an old machine part.

For an hour, they and about a dozen other Marines swept a dirt road alongside a dried-up canal near the Euphrates River, looking for stockpiles of buried weapons. They found crumpled soft drink cans, scraps of metal, even an old orange fuel filter that looked suspiciously like a large mine.

The canal, bordered by modest stone farmhouses on one side and new two-story homes on the other, runs through an area of Ramadi that is generally friendly to the United States, but is home to one of the city&#8217;s most active insurgent cells.

The Marines nicknamed the group the "28 August cell" after the date it set off a bomb last year that killed seven Iraqi policemen. Since then, the cell has attacked Americans with three bombs, but only one damaged a vehicle, hitting the right fender but causing no injuries, Deane said.

"The stuff we have uncovered is old. It&#8217;s not serviceable," he said. "It&#8217;s probably been long forgotten by the people who put them there."

In late January, however, the Marines found a large cache with thousands of mortars, grenades and tank rounds in a palm grove about 200 meters from a leading sheik&#8217;s house. The sheik had been working closely with coalition forces.

Some of the weapons were stockpiled years ago and forgotten. Sometimes insurgents plant the weapons and then report them, trying to get the official in trouble. And sometimes the official might be stockpiling weapons out of fear there will be more fighting when the U.S. forces leave, he said.

The Marines said their cache sweeps aren&#8217;t always about finding weapons as much as stopping insurgents from hiding them, or pushing them to move their caches and get caught. Their canal sweep, which started at a market area and ended beside a major highway, was partly about reminding the insurgents the Marines are here, Deane said.

"It&#8217;s kind of like a chess game with the insurgents," he said. "Basically we just want them to feel like their world is getting a little bit smaller, and we coax them into making a mistake."

He was stationed in Ramadi in 2004, and re-enlisted in November 2008 at the spot where he was hit by a bomb four years earlier. He said he expected security to eventually improve in Ramadi, but he didn&#8217;t expect it to happen so soon. And he didn&#8217;t care that they didn&#8217;t find weapons at the canal.

"We go the rest of the deployment without finding anything or without a gunshot, and it&#8217;s fine with me," he said.