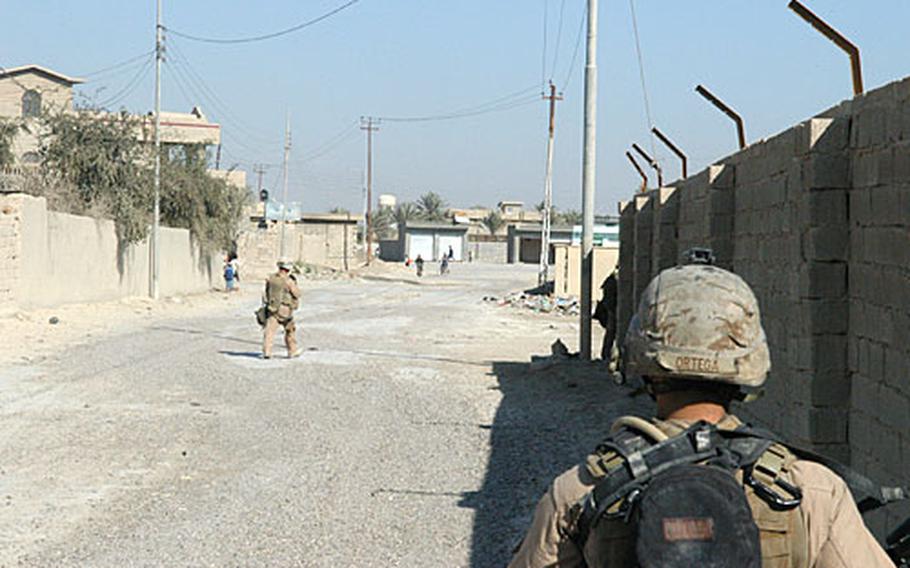 Marines with 2nd Squad, 2nd Platoon, Company L, patrol their area of operations in Karmah earlier this week. The company commander gave each squad its own area to patrol daily in the hope of putting the same Marines in front of the same locals each day. (Geoff Ziezulewicz / S&S)

Marines with 2nd Squad, 2nd Platoon, Company L, patrol their area of operations in Karmah earlier this week. The company commander gave each squad its own area to patrol daily in the hope of putting the same Marines in front of the same locals each day. (Geoff Ziezulewicz / S&S) 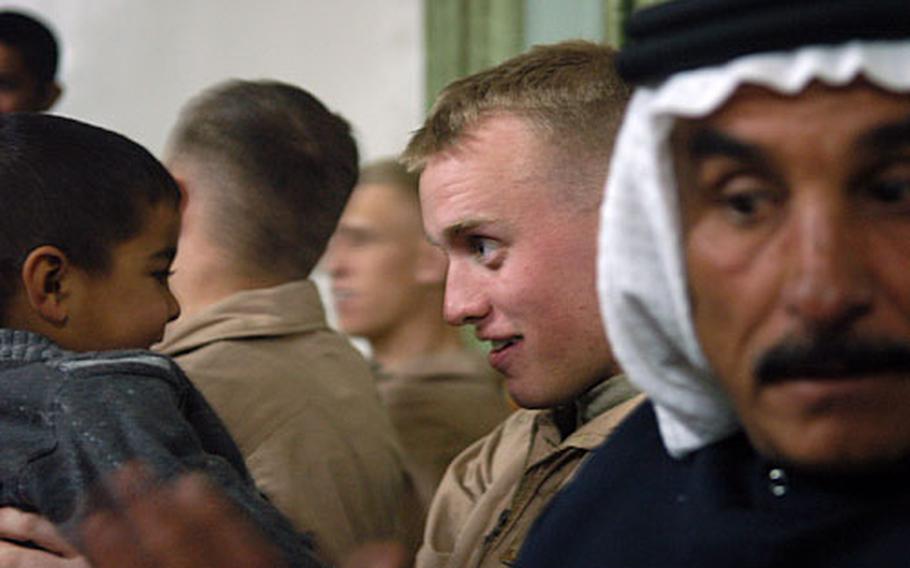 Cpl. Shea Gooch plays with a toddler after he and other Marines finished eating at the home of a local family. (Geoff Ziezulewicz / S&S) 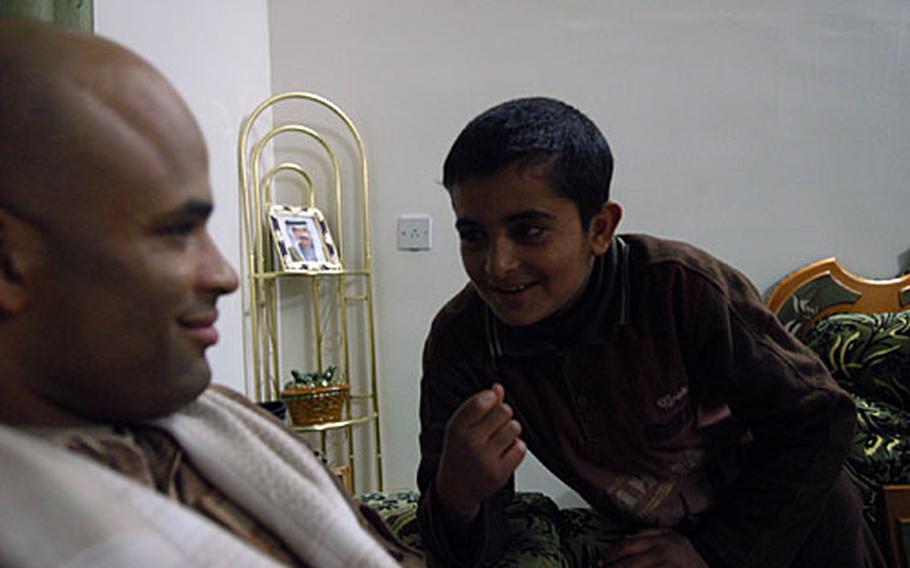 KARMAH, Iraq &#8212; Marine Corps Capt. Quintin Jones certainly didn&#8217;t sign up for this when he joined the Corps. His men in Company L, 3rd Battalion, 3rd Marines, likely didn&#8217;t enlist to do what they&#8217;ve been doing for the past five months either.

But there they were, Jones and a group of his Marines, sitting down last week to dine at the home of a local sheik in this town of 150,000, just north of Fallujah.

Just another day on the job.

It&#8217;s been that kind of deployment for the company. They entered a volatile area where attacks were a daily occurrence and local cooperation was almost nonexistent. Now, as their deployment ends in the next month, most days are focused on helping the locals and establishing the infrastructure to clear hurdles that once seemed insurmountable.

During his last deployment to this area, Jones said he was in convoys that were hit more than seven times by bombs. So far, Company L has had no combat casualties.

Not all areas around Fallujah are so peaceful. Marines continue to hunt fugitives to the east of Karmah and weapons caches are frequently unearthed.

Over the weekend, suicide bombers hit a police station in nearby Ramadi, killing at least five police. The next day, a suicide bombing near Fallujah killed six people and targeted a local sheik who was organizing resistance against al-Qaida and other extremists.

Local kids wave to passing convoys and approach the troops with the &#8220;mister mister&#8221; method of asking for a soccer ball or chocolate. Jones buys bread each day to give the chow hall at his company&#8217;s base a bit of a local flavor.

The Marines say it&#8217;s always a good sign when women are walking around. The women are out in full force these days, stopping at the marketplace that reopened in December. It&#8217;s still dirty and dusty by Western standards, but the shops are open and the Marines hope the city is ready to move forward.

The 3rd Battalion has helped funnel more than $1 million in aid to the area.

There&#8217;s a functioning city council. A clinic opened and is offering immunizations and seeing hundreds of patients a day, and a maternity ward is in the works.

The area is not without problems. Chief among them is cooperation between the various tribes in the area, and Jones said he spends a lot of time telling the sheiks that they need to keep working together.

Then there&#8217;s the harrowing reality that some of the locals working with the Marines this time around were likely the guys who were attacking them in the past.

Many locals didn&#8217;t help U.S. forces immediately because of intimidation, according to Iraqi Police Lt. Col. Alawi Ibrahim Theyab, who joined the police at the request of his family.

Theyab said he was kidnapped for 15 days by insurgents who also took his 1993 Opal. They demanded a $30,000 ransom, which his uncle paid.

Theyab is skeptical about how ready local police are and hopes the Marines stay.

For some Marines, lack of fighting is a letdown

KARMAH, Iraq &#8212; Marine Corps Lance Cpl. Lance Dargan joined the infantry to fight. His father served the Corps in Vietnam, and his brother was part of the 2004 Battle of Fallujah.

But during his stint with Company L, 3rd Battalion, 3rd Marines just north of Fallujah, Dargan and the other Marines haven&#8217;t had much chance to flex their training.

The area is one piece of the so-called &#8220;Anbar Awakening&#8221; that has seen locals siding with the U.S. against al-Qaida extremists. The resulting peace is not necessarily good news to Dargan and his buddies.

Dargan conceded that most guys probably wouldn&#8217;t want to go through combat again after being in the midst of it themselves.

Gunnery Sgt. Thomas Fish is on his third combat deployment tour and said he&#8217;s glad that the younger guys haven&#8217;t had to fight.

The company has had no combat-related casualties in this deployment, which is slated to wrap up in the next month.

For now, Dargan and his fellow grunts will have to content themselves with foot patrols and making nice with the locals. Their combat aspirations may have to wait.