Marines in Iraq warned of risks with synthetic clothes A hard crust results from a burn test conducted by Navy Capt. Lynn E. Welling, the 1st Marine Logistics Group’s surgeon, in an effort to study how polyester materials react to fire. Wearing polyester materials, which includes some types of Marine Corps-issued clothing and undershirts, is now prohibited by field commanders for Marines in operations outside the wire in Iraq. (Stephen Holt / Special to S&S)

A hard crust results from a burn test conducted by Navy Capt. Lynn E. Welling, the 1st Marine Logistics Group’s surgeon, in an effort to study how polyester materials react to fire. Wearing polyester materials, which includes some types of Marine Corps-issued clothing and undershirts, is now prohibited by field commanders for Marines in operations outside the wire in Iraq. (Stephen Holt / Special to S&S) 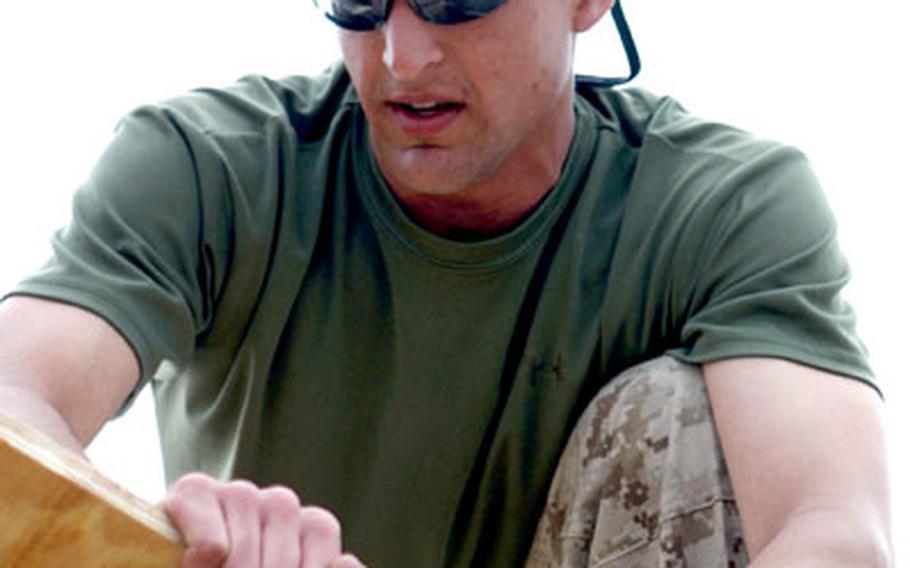 Marine Staff Sgt. Jonathan B. McClary, a combat engineer, wears a polyester T-shirt with moisture-wicking technology in an attempt to stay cool in Iraq. (Stephen Holt / Special to S&S)

Marine commanders in Iraq are being urged to ban the wear of synthetic athletic clothing containing polyester and nylon for Marines conducting operations off bases and camps.

Medical personnel have expressed concerns that a substantial burn risk is associated with synthetic materials on popular undergarments from companies such as Under Armour, CoolMax and Nike.

The Marine Corps has not written a directive on the matter but is &#8220;looking at it for a potential policy letter,&#8221; Capt. Jeff Landis, spokesman for Marine Corps Systems Command, told Stars and Stripes on Wednesday.

Landis stressed that the recommendation is only for Marines in combat. However, wearing such items will still be allowed on bases, where risk of attack is lower. And in a training environment, &#8220;commanders may make a discretionary call,&#8221; he said.

When exposed to extreme heat and flames, such materials will melt and can fuse to the skin.

&#8220;Burns can kill you and they&#8217;re horribly disfiguring. If you&#8217;re throwing (a melted synthetic material) on top of a burn, basically you have a bad burn with a bunch of plastic melting into your skin and that&#8217;s not how you want to go home to your family,&#8221; Welling said.

The Army has not issued any similar orders, as yet.

&#8220;We are looking into the matter and will be happy to comment when we have more information,&#8221; said Army spokeswoman Betsy Weiner.

The popular garments are authorized for wear and sold at many military clothing stores. Some companies have product lines specifically catering to military needs.

The Under Armour company, a favorite among many servicemembers, advertises that the fabric used to make their garments will wick perspiration from the skin to the outer layer of the clothing allowing the person wearing it to remain cool and dry in any condition or climate.

A statement from Under Armour said the decision of what clothing can be worn in combat operations is best left to U.S. military leaders.

&#8220;At Under Armour we are patriots first and last,&#8221; the statement said. &#8220;American soldiers personally choose our products to keep them dry and comfortable while exercising and training. Over the years many soldiers have contacted Under Armour directly to praise our products, which makes us very proud.&#8221;

A warning on the Under Armour Web site reads:

As the summer months in Iraq get closer, temperatures are expected hover around 130 degrees Fahrenheit. With temperatures such as these, many will be wearing the moisture wicking, quick drying clothing in an attempt to &#8220;beat the heat&#8221; and stay cool.

&#8220;I understand it gets to be 150 degrees (Fahrenheit) in a turret during the summer time,&#8221; Welling is quoted as saying. &#8220;My goal is not to make it more uncomfortable or harder on the servicemembers. My job is to make sure that when they hit an IED and are engulfed in flames, they have the best protection possible and the least risk of something [going wrong] that could have been prevented.&#8221;