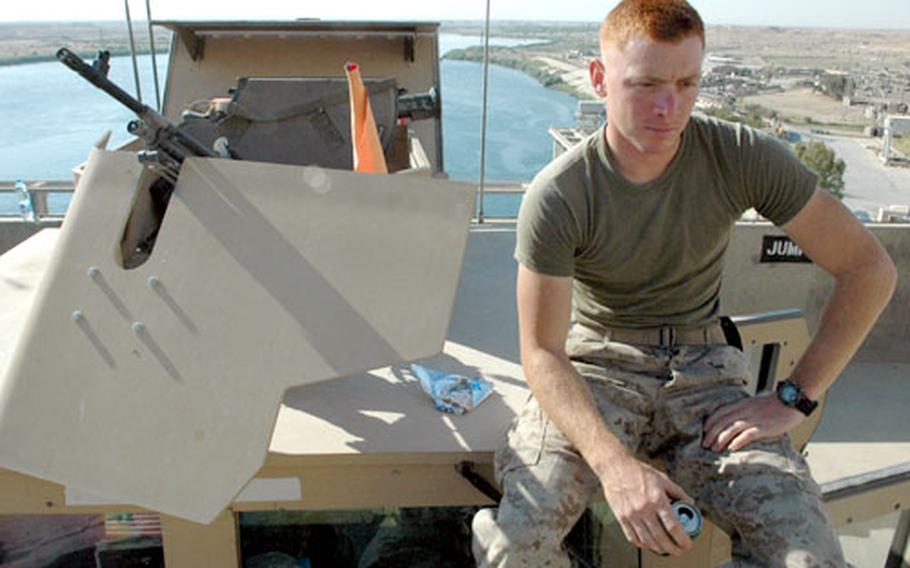 Lance Cpl. Samuel Smith of Greenville, S.C., pauses for a breakfast of pop tarts and soda before heading out on a daily patrol outside Haditha. “I couldn’t think of a better place to be to celebrate Memorial Day, over here fighting for what I believe in,” Smith said. (Andrew Tilghman / S&S)

Lance Cpl. Samuel Smith of Greenville, S.C., pauses for a breakfast of pop tarts and soda before heading out on a daily patrol outside Haditha. “I couldn’t think of a better place to be to celebrate Memorial Day, over here fighting for what I believe in,” Smith said. (Andrew Tilghman / S&S) 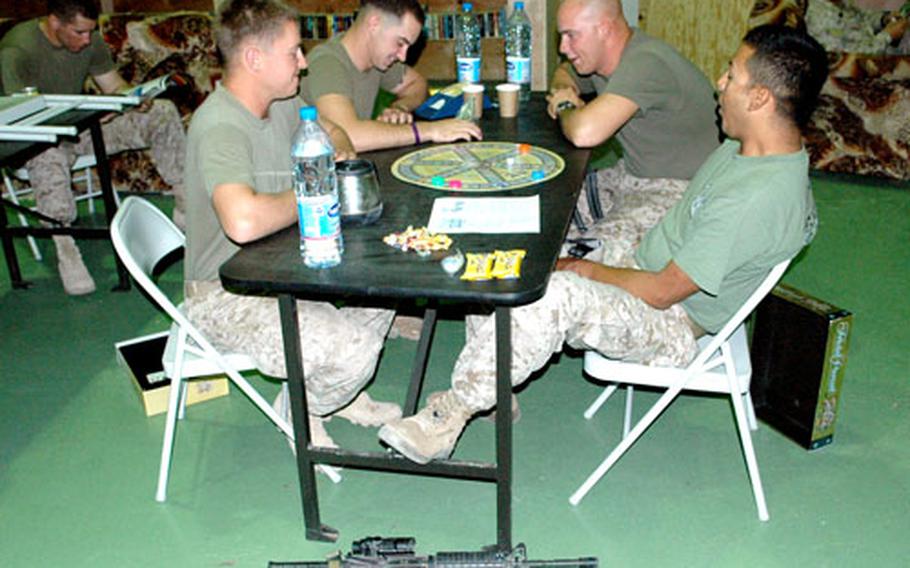 Several Marines find time Monday for a game of Trivial Pursuit, as life in Haditha continued like any other day. (Andrew Tilghman / S&S)

HADITHA, Iraq &#8212; Corpsman Robert High, a 23-year-old medic, started out his Memorial Day just like he does every other day in Iraq: sitting the overnight shift at the base aid station, waiting quietly to treat mostly routine problems like stomach flues, bug bites and jammed fingers.

&#8220;I didn&#8217;t really think of it,&#8221; High said, glancing at the date on his watch, when asked about the holiday that sends millions of Americans outside for backyard barbeques, onto the road for weekend getaways or to a memorial service.

As temperatures exceeded 100 degrees at midday, life at the U.S. Marine base at the Haditha Dam proceeded like virtually every other day, where troops stay busy out on patrol, maintaining the base and bracing for routine &#8212; and potentially deadly &#8212; threats in one of Iraq&#8217;s most dangerous hot-spots.

Tremblay did not plan a memorial service for Monday, but he did conduct one last week for two Marines killed on May 22. Lance Cpl. William Leusink, 21, of Texas and Sgt. David Christoff, 25, of Ohio, were killed moments before walking back inside their patrol base when a bomb near the gate exploded.

Troops here live inside the Haditha Dam, a massive concrete structure cutting across the Euphrates River that provides electric power to much of western Iraq and is considered one of the embattled nation&#8217;s most important pieces of public infrastructure.

Outside, the troops patrol several lawless and violent cities along the river, where insurgents have fought for years against the U.S. occupation.

&#8220;We don&#8217;t really have time to celebrate and do what people do back home,&#8221; said Lance Cpl. Samuel Smith, a turret gunner who was gathering his gear and eating a breakfast of pop tarts and soda as he readied for a daily patrol.

While troops here planned for their normal lunch of Meals Ready to Eat, they looked forward to one of their favorite dinners &#8212; steak, crab legs and General Tso&#8217;s Chicken.

Perhaps the primary perk to befall troops here on Monday was the weekly resupply trucks, which brought piles of mail, sodas and cookies for the chow hall and new DVDs for the post exchange.

Lance Cpl. Michael Brumley, a 20-year-old from Dunmor, Ky., spent his day running errands for the battalion first sergeant and, like nearly all the other troops here, was oblivious to the Memorial Day holiday.

Brumley recalled one Memorial Day tradition from his childhood, when the pastor at his family&#8217;s Baptist Church would read off a list of veterans in the congregation, asking them to stand for recognition.

&#8220;I always said I wanted to be able to do that someday. That&#8217;s part of the reason I joined the military,&#8221; said Brumley, whose father and grandfather are both retired veterans.

Brumley said he welcomes recognition from people at home, but this fight in Iraq is more about the people who live here rather than those at home.