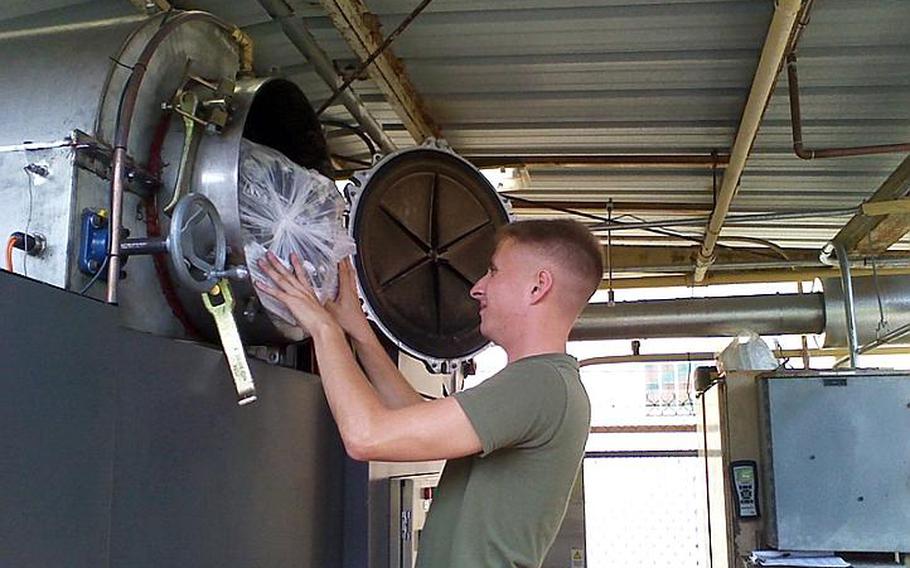 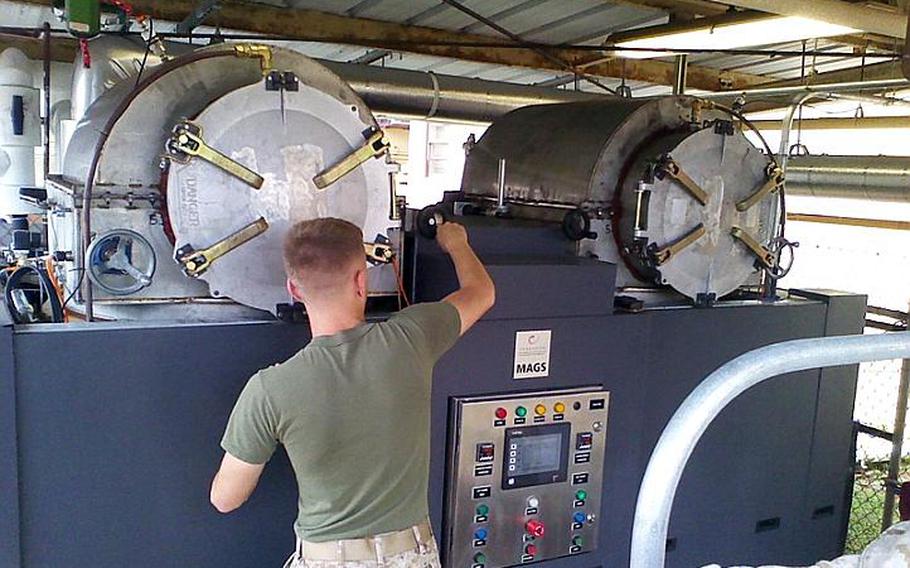 YOKOTA AIR BASE, Japan &mdash; Marine Lt. Col. Mike Jernigan knows firsthand what it takes to supply troops in conflict zones. As commander of 12 forward operating bases and combat outposts in Afghanistan in 2008 and 2009, he oversaw the delivery of everything from food to ammunition.

But he also learned that what goes in must come out. And that means trash, a mountain of it over time.

&ldquo;Sometimes waste becomes an overlooked logistical requirement,&rdquo; Jernigan said. Nevertheless, in deployment areas trash has to be burned, buried or trucked out &ndash; all methods complicated by issues of health, security and space.

The Marine Corps is now testing a compact disposal system that turns a barrel full of trash into a handful of ash through gasification, all without harmful air emissions associated with incinerators. Initial testing is at Camp Smith on the Hawaiian island of Oahu, with field testing expected this summer during training exercises.

Dubbed Micro Auto Gasification System, or MAGS for short, the technology has been developed in conjunction with the U.S. Office of Naval Research, the Canada Department of Defense and Montreal-based maker Terragon Environmental Technologies Inc.

Donn Murakami, a U.S. Office of Naval Research science adviser and a liaison between the Navy and Marines for the project, is overseeing the evaluation. He said MAGS began in early 2010 when the commanding general of Marine Forces Pacific asked him to find an alternative to burning trash.

&ldquo;He was in Iraq, where a lot of the FOBs had open burning trash pits right in the middle of their bases,&rdquo; Murakami said. &ldquo;They live in this burning soot for months and months.&rdquo;

Indeed, troops returning from Iraq suffer from high rates of respiratory illness, although a direct causal link to toxic smoke from burn pits hasn&rsquo;t been established.

Logistical problems associated with trash only increase in combat outposts.

&ldquo;You&rsquo;ve got 100 Marines living in the size of, perhaps, three basketball courts, bermed up and in bad-guy land,&rdquo; Jernigan said. The trash either fills up valuable space in that tiny outpost or has to be taken out and burned.

&ldquo;You have to provide security for the Marines on trash duty because we can&rsquo;t send them outside without protection,&rdquo; he said.

Unburned trash might also contain intelligence useful to the enemy.

&ldquo;Anything that can reduce the trash burden for Marines is a benefit,&rdquo; Jernigan said.

MAGS is adapted from similar technology already used on Navy ships. Weighing 10,000 pounds, the unit could be transported to FOBS relatively easily, Murakami said. It can handle up to 1,500 pounds of trash in a 24-hour period.

Comprised primarily of two large tanks, MAGS operates at about 1,800 degrees Fahrenheit, a temperature at which bio-solids gasify. Two to three gallons of diesel fuel and electricity are all that&rsquo;s needed to kick off and sustain the process, Murakami said.

&ldquo;The energy output of MAGS is approximately twice what goes into it because you&rsquo;re also feeding it with the trash you put in,&rdquo; he said. &ldquo;So even though we use diesel to start the process, the rest of the time it&rsquo;s not using any fuel, just the gases that are coming off the trash to sustain the cycle.&rdquo;

The trick is not only to keep the process going and sustain itself, he said, but to keep it at the right temperatures so that the emissions are clean. Oddly enough, one byproduct of gasification is water. Part of the testing being done now is to see if that water is safe to discharge into the sewer, he said.

Heat is the other major byproduct, and a secondary goal of MAGS is to harness that for warming water or tents in FOBs, he said.

The &ldquo;true test&rdquo; will come this summer when the system is deployed on the main island for a month-long exercise, he said, adding with a laugh, &ldquo;We&rsquo;re calling it MAGS-in-box.&rdquo;