Marines in Haiti training for Afghanistan 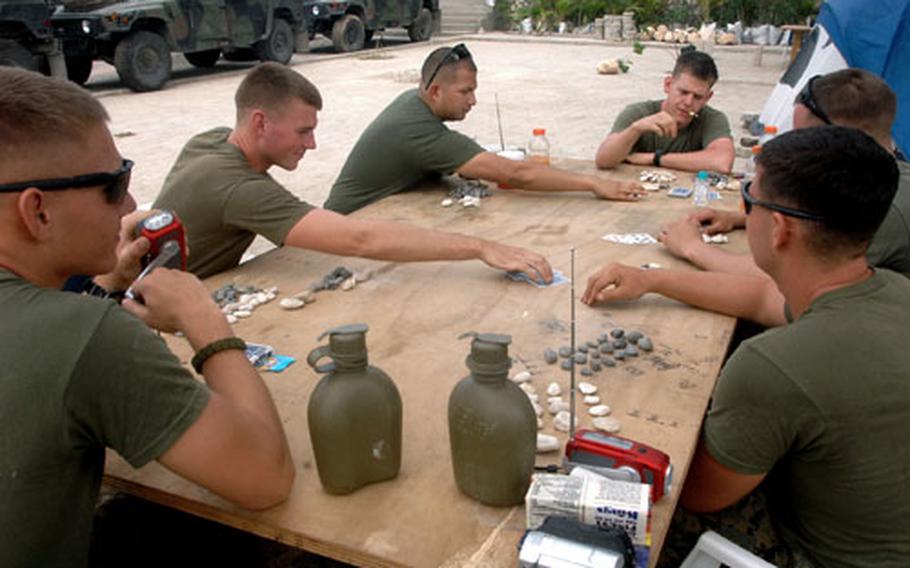 Marines in Carrefour kill time by playing cards, but they&#39;ve also begun to prepare for a deployment to Afghanistan in the spring. (Seth Robson / S&S) Marines from the 22nd Marine Expeditionary Unit have been in Haiti for two months providing security for aid groups and other servicemembers helping the Haitians recover from the disaster.

However, in recent weeks, as the relief effort scales back, Marines on shore have had less to do. Many spend most of their time confined to their small camp in Carrefour waiting for the order to return home.

Days and nights are devoted to guarding the camp, maintaining equipment, playing cards, throwing footballs and working out. And in recent days the Marines from 3rd Battalion, 2nd Marine Regiment have been honing warfighting skills.

On Thursday, a small group of Marines stormed several small concrete buildings inside the wire at their seashore camp while their comrades played the roles of Afghan insurgents, shouting &#8220;bang&#8221; as they engaged their opponents in a mock attack.

The day before, when Lt Gen Dennis J. Hejlik, commanding general of the II Marine Expeditionary Force visited the Marines on shore, he praised their good work in Haiti and asked them, &#8220;What&#8217;s next for you when you get home?&#8221;

As Huey helicopters buzzed overhead, Hejlik talked about the recent Marjah offensive, adding that there would be 20,000 Marines in Afghanistan by summer.

One of them, Sgt. Timothy Kelly, 23, of Johnston City, Ill., said members of his unit learned about the Afghan mission just before they got orders to head for Haiti.

The training that they are doing there is geared towards close-quarters battle tactics and getting Marines to understand how to carry out orders on patrol, said Kelly, who has only been outside the wire once since his unit arrived in Carrefour at the start of the month.

Another Marine at Carrefour, Lance Cpl. Keith Cobb, 23, of Soso, Miss., said the Afghan deployment will be his first time in a war zone.