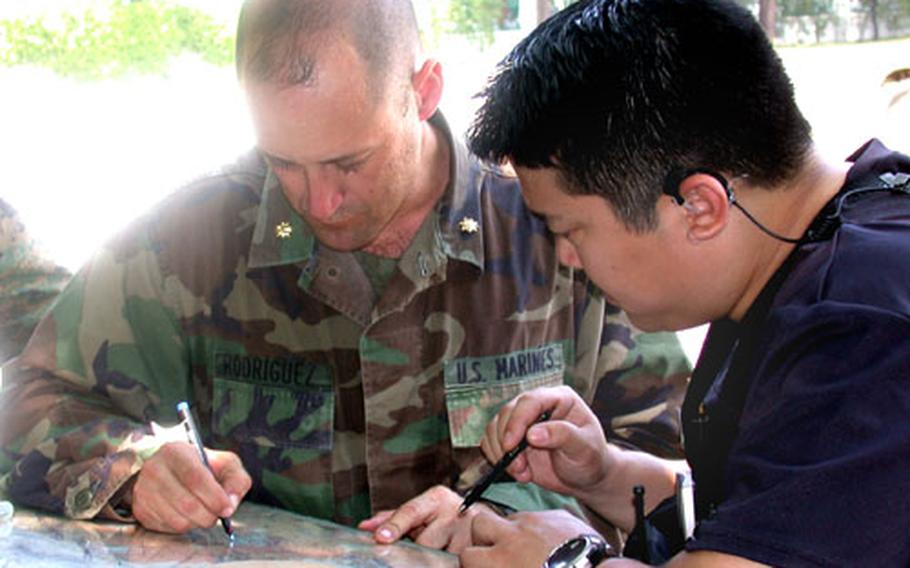 PORT AU PRINCE, Haiti &#8212; For a few minutes Monday, some U.S. Marines deployed to Haiti were all smiles. About 25 of them flanked Secretary of State Colin Powell for a group photo during the his afternoon visit the island nation&#8217;s capital.

But it was brief, as security personnel whisked the secretary to his next appointment and Marines from Lima Company, 3rd Battalion, 8th Marines went back to work.

For several days, the Camp Lejeune, N.C., Marines, housed at Haiti&#8217;s governmental palace, planned the security detail for the secretary&#8217;s visit and aided the Diplomatic Security Service of the State Department and other law enforcement with the most secure routes through the city.

The roughly 30 Marines of 1st Platoon provided the &#8220;surge in security&#8221; on the compound grounds for the secretary&#8217;s Monday visit to meet with top leaders, said Capt. Kevin Clark, Lima Company&#8217;s commanding officer.

&#8220;Everyday duties include sending the forces to patrol the area, making a presence, collecting intel. Today is more of passive security and heightened security because of how important the visit is,&#8221; Clark said.

Hours before Powell&#8217;s visit, Light Armored Vehicles from the 3-8 rumbled through the city streets surrounding the white palace.

&#8220;Our biggest concern today are the gang members, the chimere,&#8221; Clark said of the pro-Aristide members.

While the only advance public notice of Powell&#8217;s visit came Monday morning, Clark said, when U.S. cable and news television stations broadcast the travel plans, it still could have been plenty of time for trouble to brew.

Powell&#8217;s visit went off without incident. His Black Hawk helicopter landed on the palace front lawn, his motorcade escorted him to a downtown AIDS clinic and then to the U.S. Embassy before returning to the palace for a meeting with Haitian leaders.