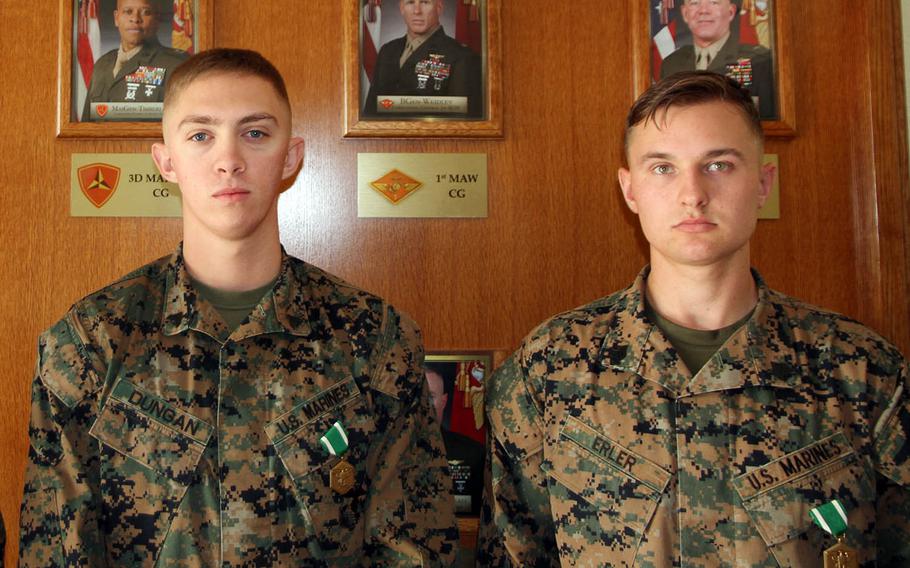 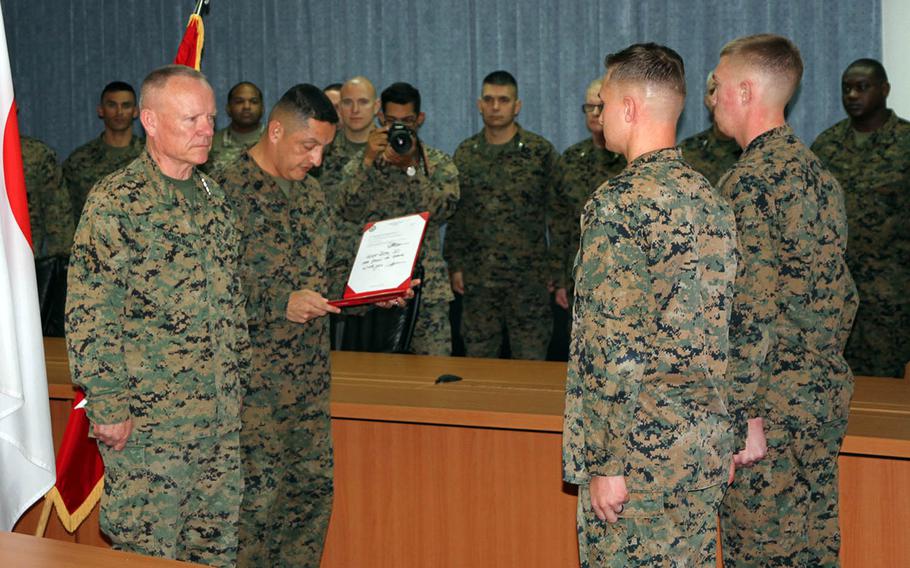 Erler, Dungan and a third Marine — Lance Cpl. Eduardo Rosario — are credited with saving the life of Marine Master Sgt. Hector Trujillo. The 44-year-old father of three was struck by a vehicle on Dec. 1 while rendering aid to injured Japanese motorists on the Okinawa Expressway. He is still in critical condition at Naval Medical Center San Diego, where he was airlifted shortly after the incident.

Trujillo “is alive today, absolutely, 100 percent because of the actions of these two individuals [Erler and Dungan],” III MEF commander Lt. Gen. Lawrence Nicholson said during the ceremony. “That is the only reason he is alive … these are two great young Marines that stood up and made a difference when it counted.”

Though Trujillo’s condition has slowly improved and he is now breathing on his own and responding to his wife, Maria, the fact that he is still recovering from grievous injuries hardly left his rescuers in the mood for celebrating.

“You feel the pride in [receiving a medal like this], but more than anything … knowing that in those situations, somebody is willing to respond like the master sergeant did; it means more than a medal,” Dungan said.

Erler said of the medals: “We feel like we’re wearing a piece of the master sergeant.”

Dungan and Rosario – whom Nicholson gave a challenge coin symbolizing excellence for his actions that day – were heading to physical training that morning when the 9th Engineer Support Battalion Marines came upon a nightmarish scene of flipped automobiles and severely injured people scattered across the expressway.

A passenger vehicle had struck a compact car, which flipped onto its roof, Okinawan police said. Trujillo, a motor transport chief who was also on his way to PT, stopped to help on the dark highway as cars whizzed by in the right-hand lane.

A U.S. military truck then barreled into the crashed vehicles. Trujillo reportedly took an ill-fated step over the center line and was struck by a car driven by a 28-year-old Marine staff sergeant. He suffered a fractured skull, broken ribs, a bruised lung and was knocked unconscious.

“Master Sgt. Trujillo stopped his vehicle to render assistance to Japanese folks that were involved in an accident, and in doing so, was hit himself,” Nicholson said during Wednesday’s ceremony.

Dungan blocked the roadway with his vehicle to prevent more collisions. That’s when he saw Erler, a 3rd Reconnaissance Battalion boat mechanic, rushing for the injured master sergeant near the median. Trujillo was not breathing and was bleeding from his nose and mouth; however, he did have a faint pulse.

Erler and Dungan cleared Trujillo’s airway and took turns doing chest compressions to get him breathing again. They kept talking to him, which kept him breathing, until paramedics arrived.

They stayed with Trujillo and kept him alive for 25 critical minutes, Nicholson said. Rosario helped manage traffic and assisted Dungan and Erler while they worked.

Police are investigating a case against the staff sergeant accused of striking Trujillo for negligent driving resulting in injury. Marine officials could not comment on the investigation because it is ongoing, a spokeswoman said.