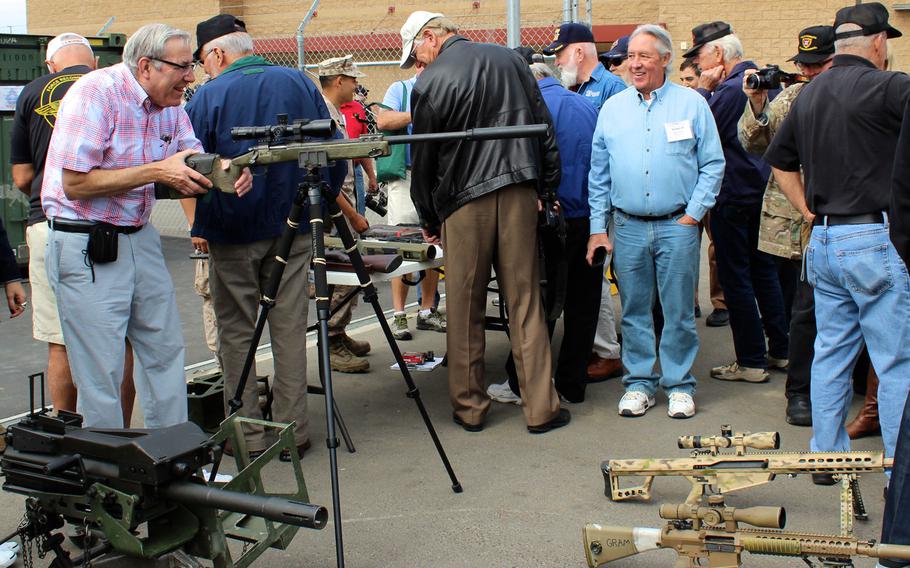 Buy Photo
A Marine reconnaissance veteran checks out a modern sniper rifle Thursday, April 23, 2015, at Camp Pendleton, Calif. About 175 Vietnam-era recon vets reunited at Camp Pendleton for a commemoration of the 50th anniversary of the beginning of the Vietnam War. (Jennifer Hlad/Stars and Stripes) 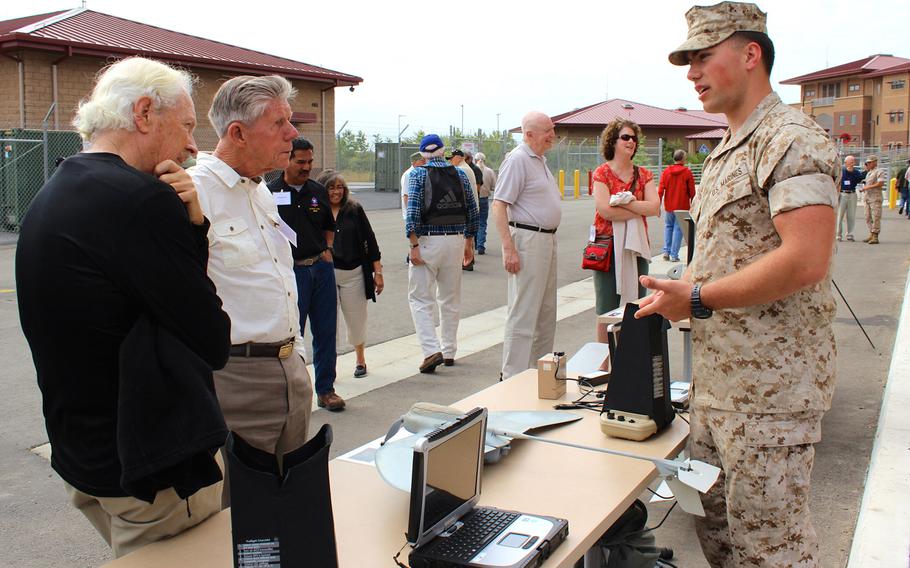 Buy Photo
Jim Ledford, right, who served with 1st Force Reconnaissance Company in Vietnam from 1969-1970, checks out a scope at a reunion for Vietnam-era recon veterans Thursday, April 23, 2015, at Camp Pendleton, Calif. (Jennifer Hlad/Stars and Stripes) 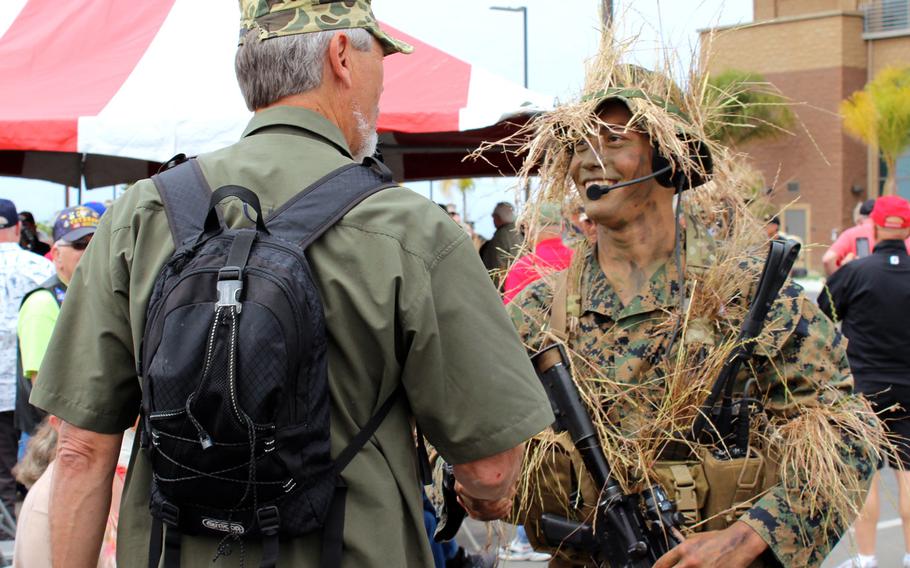 Buy Photo
Cpl. Brandon Tan of 1st Marine Reconnaissance Battalion shakes hands with a Vietnam-era recon veteran Thursday, April 23, 2015, after a demonstration at Camp Pendleton, Calif. The veterans gathered at the base for a reunion. Tan thanked many of them for their service and the legacy they cultivated. (Jennifer Hlad/Stars and Stripes) 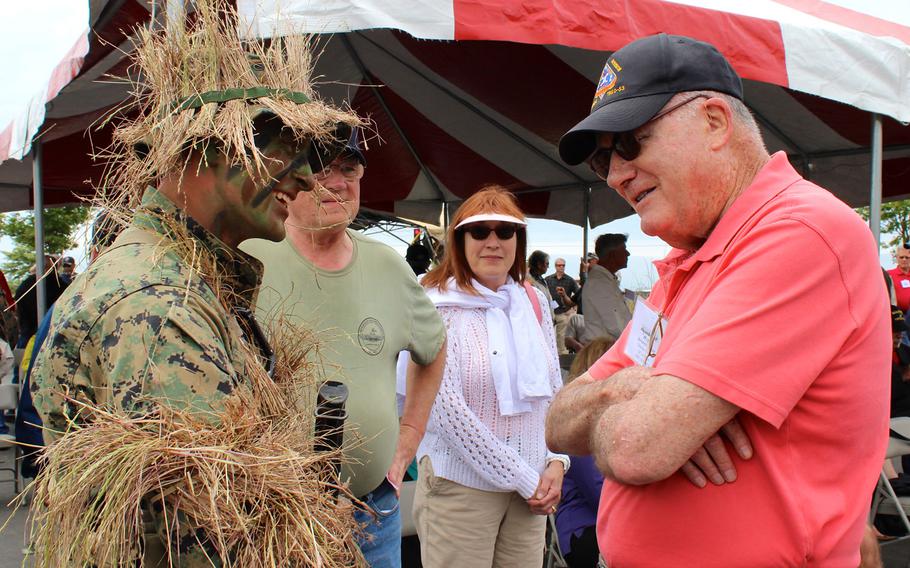 Buy Photo
A Vietnam-era reconnaissance corpsman talks to current members of 1st Marine Reconnaissance Battalion on Thursday, April 23, 2015, at a recon reunion at Camp Pendleton, Calif., to commemorate the 50th anniversary of the U.S. entering the Vietnam War. (Jennifer Hlad/Stars and Stripes)

After his return, John Baker was told by the first girl he dated not to mention to her friends or family that he had been a Marine in Vietnam.

But this week, when about 175 fellow reconnaissance Marines from the Vietnam era gathered in San Diego County, they were welcomed and embraced.

Cpl. Brandon Tan was one of several current recon Marines who participated in a raid demonstration Thursday for the veterans. Afterward, wearing camouflage face paint and foliage on his uniform, he shook the hand of veteran after veteran.

“Thank you. You’re the reason we’re here,” he said.

The reunion was designed as a way for all Marines who served in recon units in 1965-71 to commemorate 50 years since the U.S. entered the Vietnam War.

Active-duty Marines showed off their equipment and demonstrated a helicopter jump and a raid. Afterward, they honored the memory of their fallen recon brothers at a memorial service.

It’s important to honor the past and allow Marines to connect with their unit’s history, while also recognizing that one day, they will be the ones holding reunions, said Lt. Col. George Hasseltine, commander of 1st Reconnaissance Battalion.

Baker, who lives in Anaheim Hills and helped organize the event, said participants also included some of the pilots who helped support recon in Vietnam.

Even today, he said, he gets a “warm fuzzy feeling” when he sees or hears a helicopter.

The wop-wop-wop of the rotors is “the best music we have ever heard,” said Baker, who served in Vietnam in 1969-70.

And though he wasn’t initially sure the veterans would get a warm reception, he said that after seeing the current Marines, he knows the Corps is in good hands.

Pender said going from the draft to an all-volunteer force has dramatically improved the services.

“Marines today are motivated, a lot smarter and more capable,” he said.

Benckwitz, of Chino Valley, Ariz., served about 10 months in Vietnam in 1969 before he was medically evacuated. He said he came to the reunion to see old friends but also enjoyed seeing the current Marines and learning about their equipment.

John Burtoft, of The Villages, Fla., was a corpsman with 1st Reconnaissance Battalion and went to Vietnam twice: once on the USS Pyro for 18 months in 1964-65, and again with recon in 1968-69.

While all corpsmen had rifles for self-defense, recon corpsmen are full combatants, he said.

“You can’t send five people into the jungle and have one not fight,” he said.

The worst battle, he said, began with the team being chased all day, then calling a helicopter when they thought they had lost the enemy. They were waiting for the chopper when three North Vietnamese fighters approached.

Burtoft said he killed them, then others came rushing up the hill, kicking off a daylong battle. It was only when the report on the battle was declassified about 10 years ago that he realized it had been his 25th birthday.

Mulvihill joined the Marine Corps in 1964, and was in Vietnam the next year. On June 15, 1966, he and 17 other Marines were on Hill 488, deep in enemy territory, when a battalion of Viet Cong fighters approached and launched a ferocious attack.

The Marines formed a tight circle and stood their ground, facing unrelenting fire as they fought through the night, according to the Medal of Honor citation for Gunnery Sgt. Jimmie Howard, who organized the small force.

At one point, Howard told the Marines to throw rocks at the approaching enemy, according to accounts of the battle.

In the end, six Marines died and 12 were wounded. The battle also led to four Navy Crosses and 13 Silver Stars — including one for Mulvihill, a radio operator.

Mulvihill got out of the Marine Corps in 1968, but re-enlisted 17 years later, just shy of his 38th birthday. He retired in 2002 and still works for the Marines as a tactical safety specialist at Marine Corps Air Ground Combat Center Twentynine Palms.

The reunion was his first in several years, he said.

Peter Cetani and Stan Chronister, who served with Mulvihill, were ecstatic to see him, and said the event was like reuniting with brothers.

“We are one family,” Cetani said.