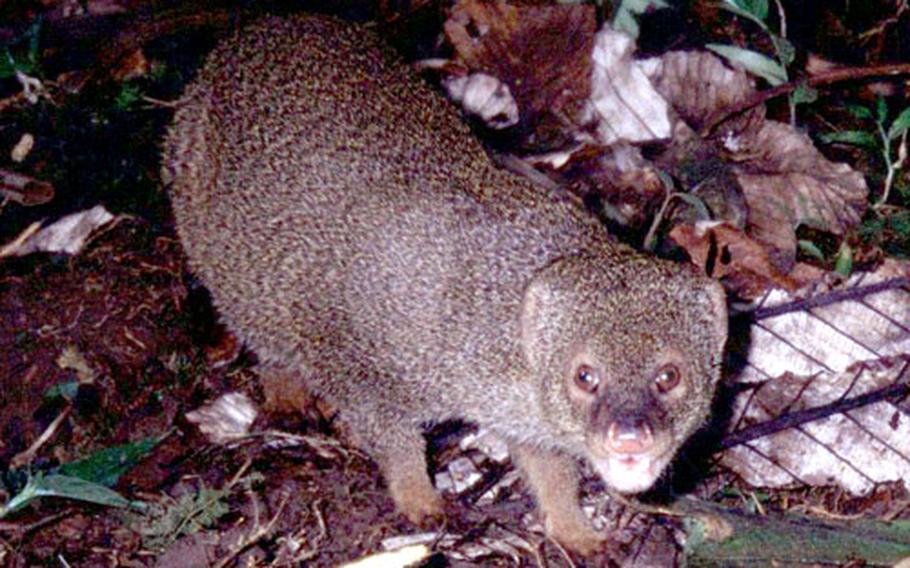 The mongoose, like the one seen in this image from the U.S. Wildlife Services Image Collection database, has shown signs that it is infiltrating northern Okinawa where the Marine Corps has its Jungle Warfare Training Center. Protecting endangered animals “is one of our hottest topics right now because of the mongoose,” said a Marine official. (Courtesy of USDA)

CAMP FOSTER, Okinawa &#8212; Marines being put through grueling jungle-warfare training are not the only warriors at the Corps&#8217; northernmost camp on Okinawa this year.

Joining them in combat have been crews of Okinawans armed with traps baited with cuttlefish and dried squid. Their mission: Stem the incessant northern migration of the mongoose, an animal imported from Southeast Asia in 1910 to control the island&#8217;s habu snakes.

Ironically, the poisonous snakes, which endangered sugar cane workers in southern Okinawa, were nocturnal and the mongoose liked to sleep at night. The population control attempt failed.

And now, with no natural predator save man, the mongoose slowly has migrated north, the last habitat of the rare Yanbaru rail (a bird), Noguchi woodpecker, Ryukyu long-tailed rat, Ibo-imori salamander, Ryukyu robin and Amami woodcock.

In all, 77 rare and endangered species live in Yanbaru Forest &#8212; many of them on the mongoose&#8217;s diet, said Go Ogura, University of the Ryukyus zoologist.

The Jungle Warfare Training Center covers 8,735 acres of the forest.

The failure of the traps has caused a change in strategy.

The fence project includes no military land. While it&#8217;s being built, Okinawa workers have been granted access to Marine training areas to trap mongooses already beyond the fence line.

Entomologist Mitsugu Sugiyama, with the Marine Facilities Engineer Division, said that for the Marine Corps, protecting exotic and endangered animals &#8220;is one of our hottest topics right now because of the mongoose.&#8221;

When Marines did an environmental study of the JWTC in 2002, no mongoose sightings were recorded.

But the prefecture later found evidence the mongoose did exist in the JWTC. They trapped 186 there from March 2004 to March 2005, Sugiyama said.

The prefecture has funded the campaign but the Marines may seek funds of their own to help place traps in hard-to-reach areas, Sugiyama said.