Marines help one another capitalize on abbreviated Blue Chromite drills 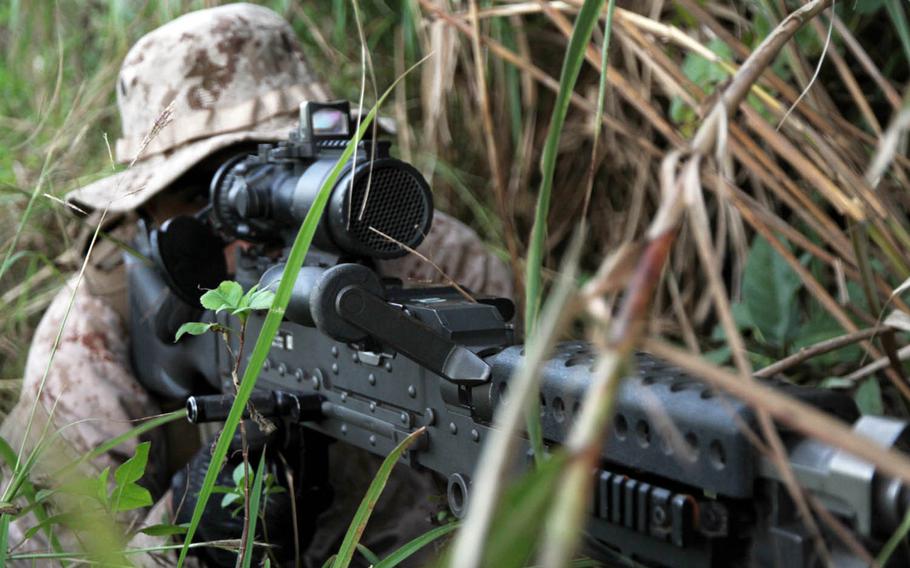 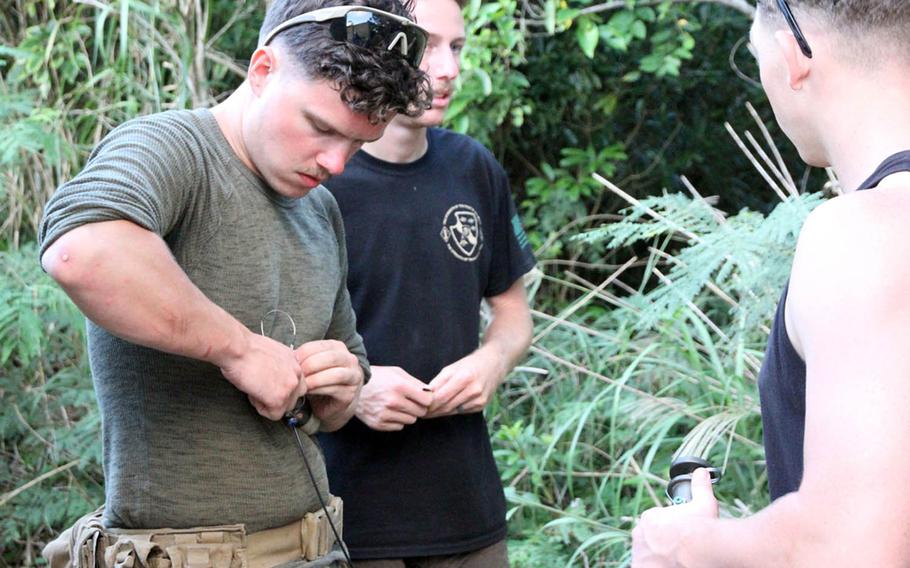 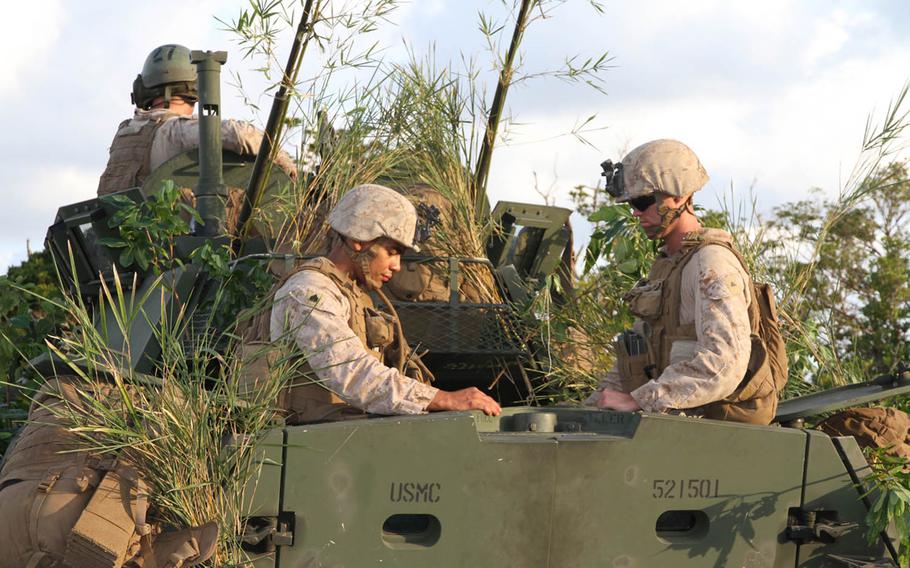 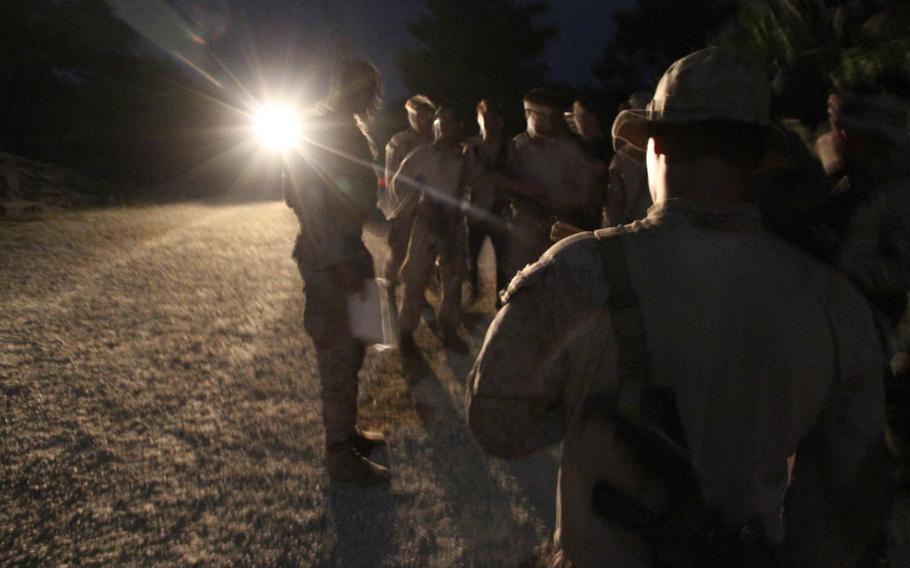 A few hours later, the complex’s maze of buildings with high, protected rooftops and walls was the scene of an intense mock battle for the fifth iteration of Blue Chromite, an annual Navy-Marine Corps exercise in the jungle training areas of Okinawa and its surrounding seas.

Davis and fewer than two dozen of his fellow 3rd LAR Marines served as the opposition that fought to the last man to protect the compound and a high-value target from an invading force of at least 90 Marines from Bravo Company, 1st Battalion, 3rd Marine Regiment.

The nighttime helo-borne capture-or-kill mission was one of the final touches on Blue Chromite, which kicked off Oct. 30 and runs through Sunday.

“Normally everything you do is by the book,” Davis said. “Once you get the chance to be [the opposition force] you get to go way off the books [as far as plotting a formidable defense]; you get to be as creative as you want to be. You can pretty much make your own rules. But [invading force members] have to find a way to react to that by the book. It’s good for them, but it’s also good for us because we get to think outside the box.”

This year, 2,500 Marines and sailors participated in Blue Chromite — along with the dock-landing ship USS Ashland, 18 amphibious-assault vehicles, three landing craft utility vessels and numerous air assets — in an exercise that was delayed and abbreviated by back-to-back typhoons, Marine officials said.

The exercise also included a humanitarian-aid rehearsal and nighttime air assault on Ie Island, forcible-entry operations on Okinawa’s beaches using AAVs, the tactical recovery of aircraft and personnel at various points around Okinawa, and shipborne operations off the Ashland and the Army’s LCU vessels.

Despite the cancellation of some live-fire and close-air support drills, the Marines were able to make the most of the exercise, leaning on their comrades to provide a tough obstacle.

“We just put in barricades right down the road. [The enemy’s] going to stop there and we’re going to pop off a claymore and disable one of their [vehicles] or half a dozen of their foot troops,” Davis said ahead of the drill. “It’s pretty fun.”

Shots in the dark

As darkness fell on a place called “Sniper MOUT,” or Military Operations on Urban Terrain, the 3rd LAR Marines chose the most advantageous and protected positions available and watched as the mock enemy’s attack helicopters began to circle. They dispatched scouts who watched the transport helicopters land a short distance away. They knew Bravo 1-3 was out there in the darkness, and they were coming for them.

An explosion a short distance away suddenly shattered the silence. The invaders had triggered an IED. Others were cut down due to a lack of dispersion, a no-no for infantry Marines.

Battle chatter filled the air between bursts from heavy weapons and rifles. Coming in from all directions, the Bravo Marines breached the compound almost immediately. Many were cut down in the house-to-house fight that ensued. It was close quarters, with Marines firing blanks at one another as they turned the corners of rooms and outdoor compound walls.

Muzzle flashes cut through the darkness, hot and angry. Mechanized vehicles moved in adding to the body count, their loud cannons commanding attention.

The 1-3 Marines hit pretty much every IED that Davis and his fellow 3rd LAR Marines set out. They entered the target building. At one point, they were firing on one another from the ground and a second story window.

The attacking Marines thought they had cleared a rooftop and yelled “Clear!” — only to be cut down by an enemy who had gone unnoticed in the dark.

When all was said and done, they pushed through the compound, eliminated the 3rd LAR Marines, killed the high-value target and made it back to the extraction point within their two-hour window. However, they had clearly suffered heavy losses.

“1-3 did a pretty good job from what I saw,” said Lance Cpl. Nathan Weaver. He and his fellow 3rd LAR Marines got about a half-dozen 1-3 Marines in front of their position. “You couldn’t really hear them until they started shooting at us.”

Weaver said it had been hard to see during the mock battle.

“That was good training; pretty realistic,” he said.

Others were less diplomatic and talked about how they had “smoked” 1-3. But they made mistakes, too, by opening themselves up to being seen from the air prior to the engagement.

The overall mission and the way it played out pleased organizers.

“[1-3] had a pretty tough time of it but they were able to push through because of the size of their force,” said 1st Lt. Walker Mills of 2nd Battalion, 1st Marine Regiment, one of the officers overseeing the training. “[3rd LAR] took it really seriously.”

Mills said the 1-3 Marines didn’t really have an answer for the light-armored vehicles that were posing as Soviet-era BTR-80 amphibious armored personnel carriers.

“It was a valuable experience to wargame against a peer [military] as opposed to a couple of insurgents with an IED.”