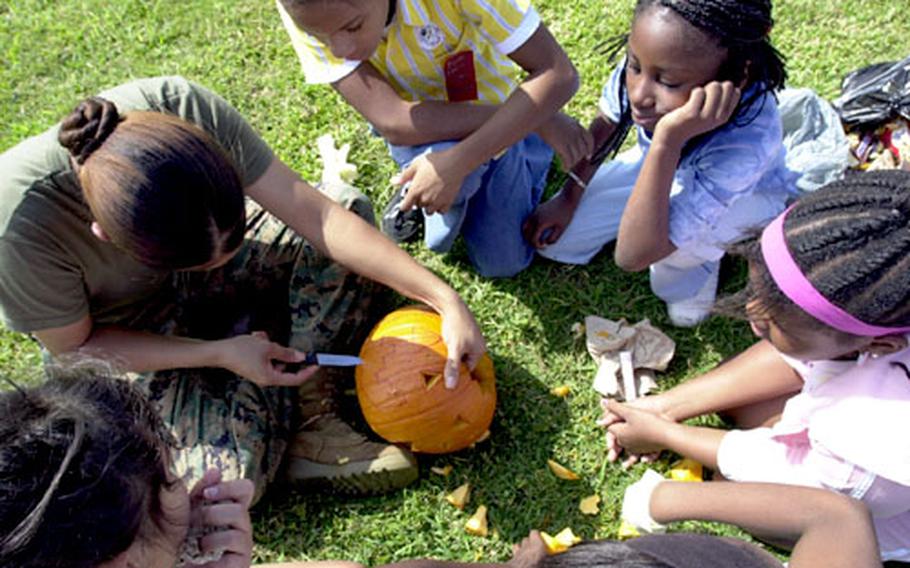 Marine Pfc. Joyce Funderburk, a volunteer with the Single Marine Program, carves the face of a pumpkin after the group of fourth graders drew it. More than 20 Marines volunteered their time to help 300 students at Kinser Elementary School carve pumpkins. (Fred Zimmerman / S&S)

Marine Pfc. Joyce Funderburk, a volunteer with the Single Marine Program, carves the face of a pumpkin after the group of fourth graders drew it. More than 20 Marines volunteered their time to help 300 students at Kinser Elementary School carve pumpkins. (Fred Zimmerman / S&S) 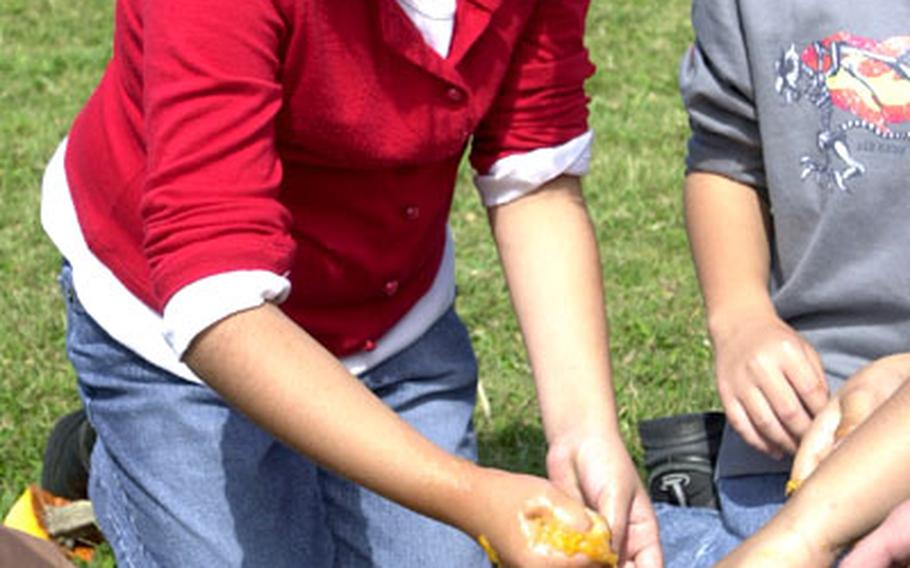 Kaitlyn Rowe, a fourth-grader at Kinser Elementary, digs in and scoops out a gooey mess of pumpkin seeds at the school Thursday. (Fred Zimmerman / S&S) 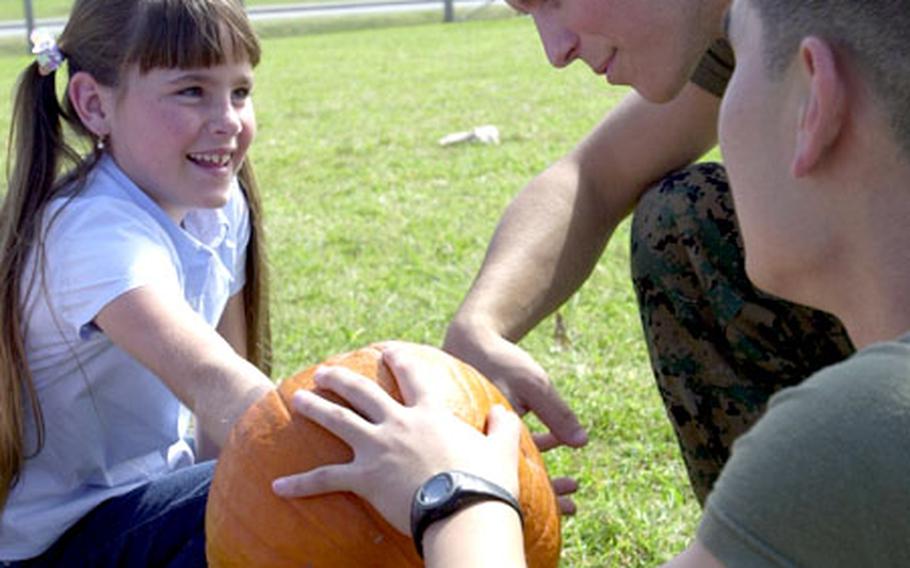 Jacqueline Reid, a fourth-grader at Kinser Elementary, smiles as she pulls seed out of a pumpkin that Lance Cpl. Jae Jeng is holding. Fellow Lance Cpl. William Craig, middle, spent several minutes convincing Reid that it wouldn&#39;t be that bad. (Fred Zimmerman / S&S)

CAMP KINSER, Okinawa &#8212; For kids who like to play in slimy, gooey messes, or dress up in disguises and pretend to be someone &#8212; or something &#8212; else, Thursday was a good day to be a student at Kinser Elementary School.

Students had an opportunity to show their artistic side as a group of Marines from the Single Marine Program spent two hours at the school to help carve pumpkins. Once a Marine cut a hole in the top of the pumpkin, the students took turns scooping out the insides with their bare hands. While some students seemed a bit hesitant, others gladly dug in.

&#8220;This is a lot of fun,&#8221; said fourth-grader Kaitlyn Rowe, as she stuck her hand inside the pumpkin, pulling out a clump of seeds in a gooey mess of orange pulp.

Once the pumpkins were clean, the students drew faces on them, which the Marines carved out. Some pumpkins had three or four faces.

Lugo said the group wanted to do something at the school, so she called the school and arranged the day. The next step was getting the pumpkins. The commissary agreed to donate 60.

Lugo said each Marine who volunteered at the school would receive a letter of appreciation, but she said the servicemembers volunteer their time for other reasons.

&#8220;A lot of them have brothers and sisters, or nieces and nephews, so they miss that mentoring and interacting with kids,&#8221; she said.

As the pumpkin carvers were wrapping things up, the kindergarten classes were getting ready for their Storybook Parade. Each of the four classes picked a nursery rhyme to represent and dressed in costumes to portray the story. Brian Parker&#8217;s class chose Little Miss Muffet, Rebecca Crossan&#8217;s students dressed as mice and clocks to portray Hickory Dickory Dock, Alice Dickinson&#8217;s class appeared as the Little Old Woman Who Lived in a Shoe and Regina Shepard&#8217;s flock was herded along by Little Bo-Peep.

The students marched around the school, both inside and out, while singing songs or saying their nursery rhymes.

Shepard said the school has done the parade since the early 1990s. She said this year the theme was nursery rhymes &#8212; which the students studied all week. She said the teachers use the nursery rhymes to teach basic literacy skills, word families and diction.