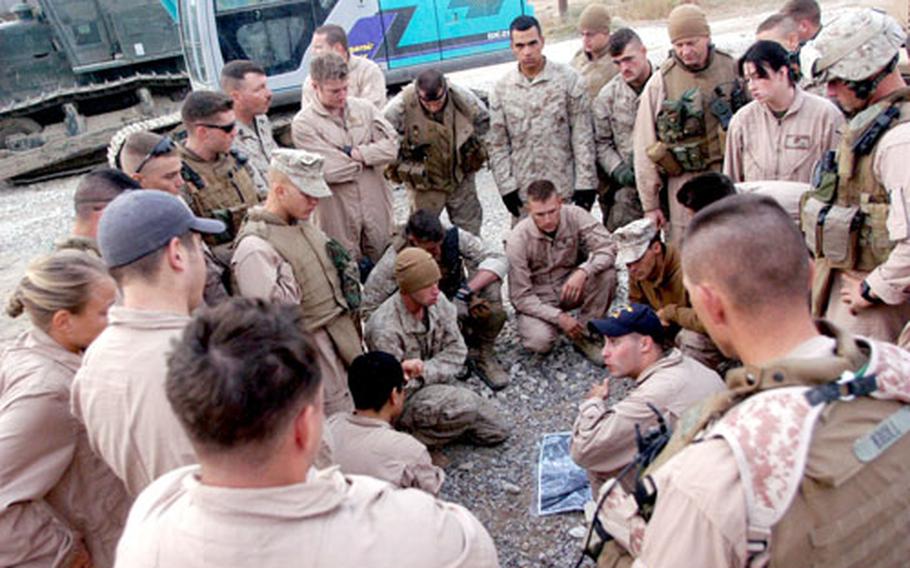 First Lt. Joe Apkarian, center, goes over the day’s plan on Monday with a route-clearance team from Company B, 9th Engineer Support Battalion at an Iraqi army base in Jazeriah, Iraq, in Anbar province. The group removed and destroyed 15 bombs over seven days along a stretch of road outside the base. (Charlie Coon / S&S)

First Lt. Joe Apkarian, center, goes over the day’s plan on Monday with a route-clearance team from Company B, 9th Engineer Support Battalion at an Iraqi army base in Jazeriah, Iraq, in Anbar province. The group removed and destroyed 15 bombs over seven days along a stretch of road outside the base. (Charlie Coon / S&S) 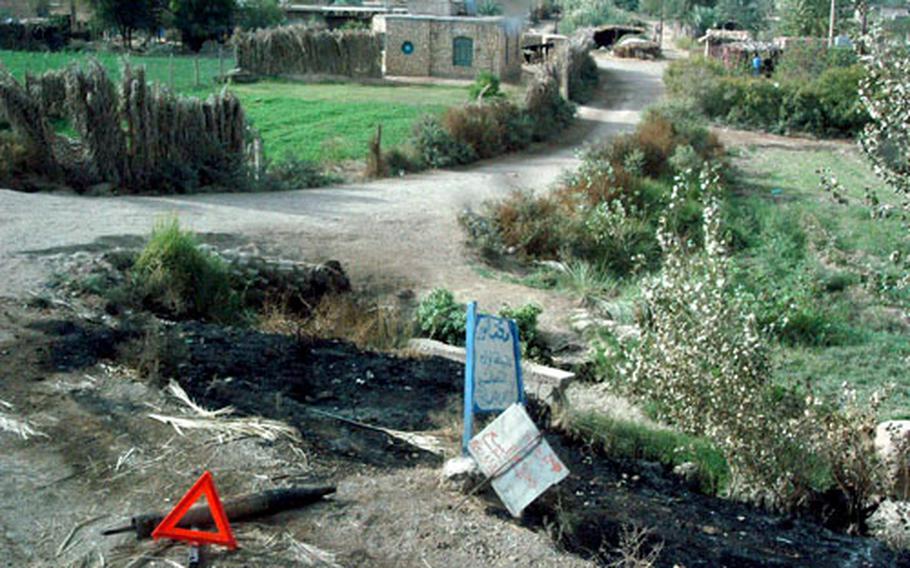 An unused rocket lies next to a road in Jazeriah, Iraq, after being dug up Monday by a route-clearance team from Company B, 9th Engineer Support Battalion. (Charlie Coon / S&S)

JAZERIAH, Iraq &#8212; The Iraqi battalion was unwilling to patrol the 2&#189;-mile stretch of road outside its own gate because the road was lined with bombs.

So the U.S. Marines were called in.

Over the past week they combed the narrow road, and found and destroyed at least 15 roadside bombs. They also built four, 40-foot-high observation towers from which the Iraqi soldiers could keep an eye on things.

On Monday, members of Company B, 9th Engineer Support Battalion finished the job and returned the road to the Iraqi battalion. Perhaps now it was a less deadly place.

Jazeriah is a village on the Euphrates River halfway between Ramadi and Fallujah, a region fiercely loyal to former President Saddam Hussein. Since the U.S. military ousted Saddam in 2003, the region has become a haven for insurgents, and where the U.S. military and its allies, such as the Iraqi soldiers, are most despised and targeted.

Some of the bombs &#8212; usually mortar or artillery shells 4 to 6 inches wide &#8212; found last week were recently planted and intricately rigged to rip vehicles and people to shreds.

Others were planted weeks or months ago, under or next to the road. All they needed was for someone to make them operational, such as by running an electrical wire from the bomb to a site where a bomber would lie in wait.

Spotting the bombs, which the military calls improvised explosive devices, is rarely easy in Iraq. Crumbling roads, roadside trash and jury-rigged wiring are all part of the scenery.

&#8220;There are so many different types of indicators,&#8221; said Sgt. John Lee, who drives an armored rig that uses a large, hydraulic claw to probe places where bombs might be planted.

&#8220;We look for anything that looks abnormal,&#8221; Lee said, referring to possible sites and markers for planted bombs.

Local Iraqis were shooed away as the Marines, along with members of the Navy&#8217;s Bahrain-based, Explosive Ordnance Disposal Mobile Unit 4, searched the road. Since so many bombs had been found, no one could be trusted.

Was someone simply taking a walk, or were they making mental notes on what the U.S. troops were doing?

Sgt. Justin Caughey, another of the bomb spotters, said it was possible that insurgents could simply replant other bombs along the same stretch of road.

Last spring, the company that preceded Company B into the area built three towers nearby. In September, one of them was attacked by insurgents firing rocket-propelled grenades, and at least one Iraqi soldier was killed.

But that wasn&#8217;t Company B&#8217;s problem at the moment. They were to remove bombs so that U.S. and Iraqi troops, and innocent bystanders, weren&#8217;t killed by them in the future.