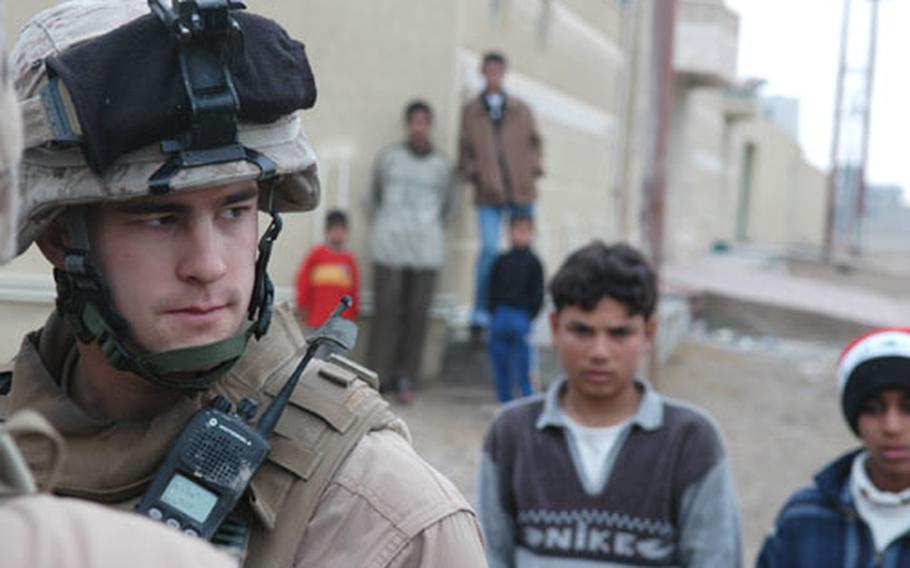 Cpl. Brett Younts, 21, of 3rd Squad, 4th Platoon, Company L, 3rd Battalion, 5th Marines, led a patrol Saturday to find locals they could hire to clean up a trash-strewn part of their area in Fallujah. With a vast reduction of violence here in the past six months, such missions are commonplace these days. (Geoff Ziezulewicz / S&S)

Cpl. Brett Younts, 21, of 3rd Squad, 4th Platoon, Company L, 3rd Battalion, 5th Marines, led a patrol Saturday to find locals they could hire to clean up a trash-strewn part of their area in Fallujah. With a vast reduction of violence here in the past six months, such missions are commonplace these days. (Geoff Ziezulewicz / S&S) 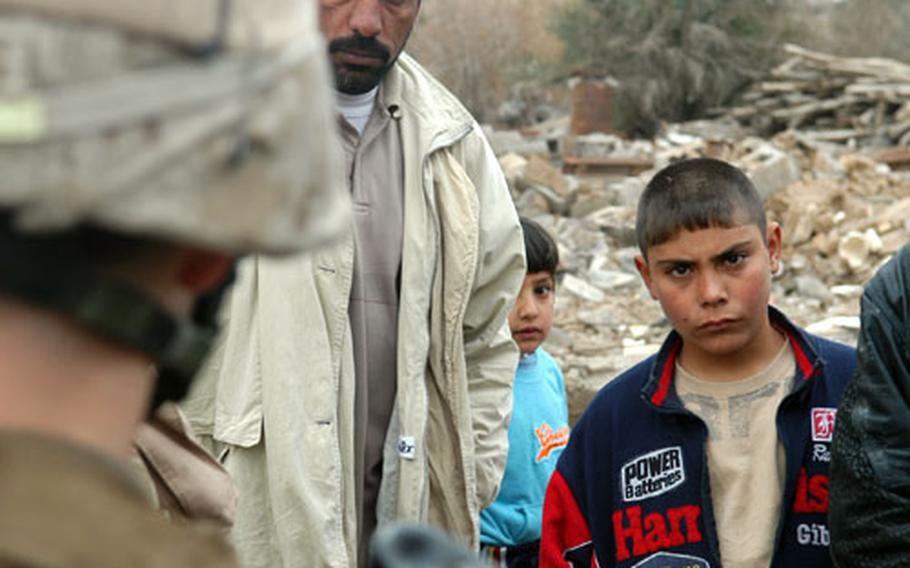 A local boy listens as Marine Cpl. Brett Younts tries to convince a group of men to help lead a project in Fallujah, Iraq, to clean up trash. The pitch fell on deaf ears, and Younts went elsewhere to find interested Iraqis. (Geoff Ziezulewicz / S&S) 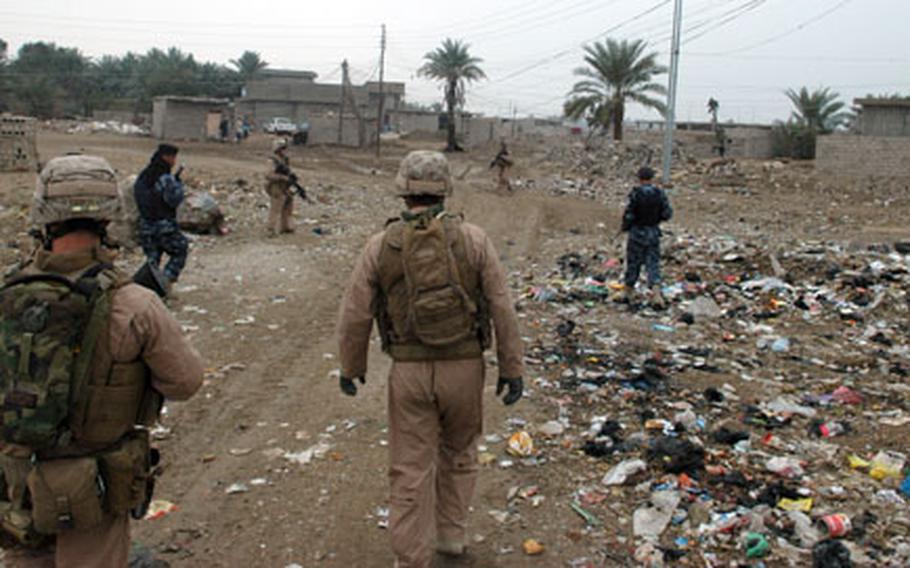 Marines with 3rd Squad, 4th Platoon, Company L, 3rd Battalion, 5th Marines, walk through a trash-strewn patch of their area in Fallujah. They were trying to find a local man who could gather unemployed Iraqis to clean up the spot. (Geoff Ziezulewicz / S&S) 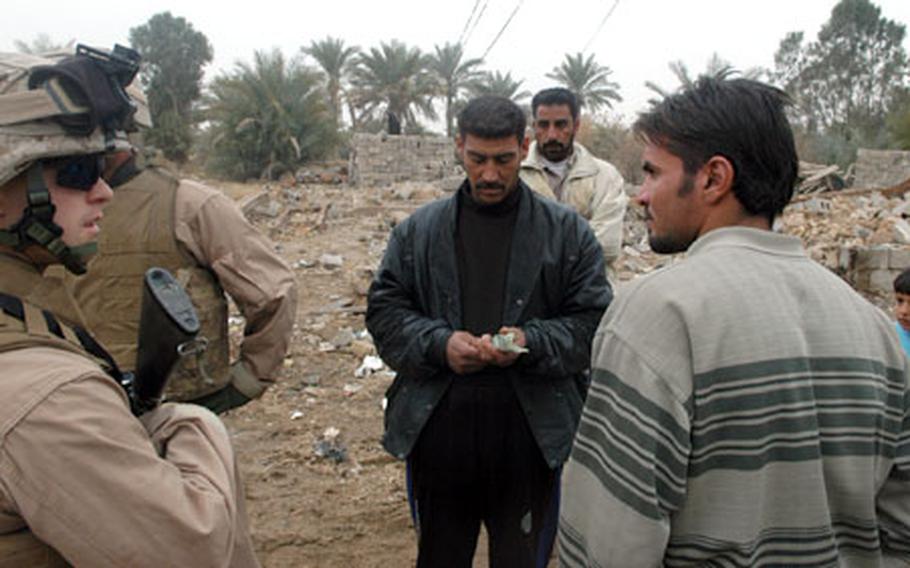 Marine Cpl. Brett Younts tries to convince local Fallujah men to help him organize unemployed locals to clean up a local area. These men were not interested. (Geoff Ziezulewicz / S&S)

FALLUJAH, Iraq &#8212; The Jubayil district appears in certain places to be drowning in its own filth. On Saturday, Marines with 3rd Squad, 4th Platoon, Company L, 3rd Battalion, 5th Marines set out on a patrol to find some locals who could help lead a cleanup effort.

At the helm was Cpl. Brett Younts of Nampa, Idaho, a 21-year-old on his second deployment. Like many young grunts to his left and right on that patrol, he said he did not enlist expecting this kind of mission.

Younts&#8217; Marines were looking for a local man to hire other men to clean up a particularly dirty garbage-strewn patch in the middle of the city&#8217;s poorest area.

The squad set out from an Iraqi police station sitting on the border between the Jubayil and Nazaal districts, where Marines live with Iraqi police. From this base, different squads run their daily patrols.

The first group of men that Younts approached were uninterested in the offer Younts was trying to sell.

Marines on patrol said that locals fall into three categories: They are fully behind U.S. forces in the area, fully against them, or are on the fence. Efforts like the garbage cleanup are aimed at the fence-sitters.

Throughout this city, which has seen vast security improvements in the past six months, Marines are doing missions just like Younts and his men.

As Younts tried to find someone to lead the cleanup effort among this group of men, Staff Sgt. Luis Macias, along to observe, seemed exasperated by the Iraqis&#8217; disinterest.

This was also a way to make some cash without the local mokhtar &#8212; essentially a community leader for the neighborhood &#8212; skimming off the top, Macias told the men through an interpreter.

The Marines moved on and eventually found a man who said he&#8217;d take point on the project, and Younts is giving him a few days to rustle up some laborers.

Each company of the 3rd Battalion in Fallujah gets some cash they&#8217;re able to throw at projects like this, Younts said.

And though persuading Iraqis to clean up the streets wasn&#8217;t part of his training, Younts said such experiences can help those Marines who will deploy to Iraq again. Getting to know the people has become a crucial next step in the war for Fallujah and Anbar province.