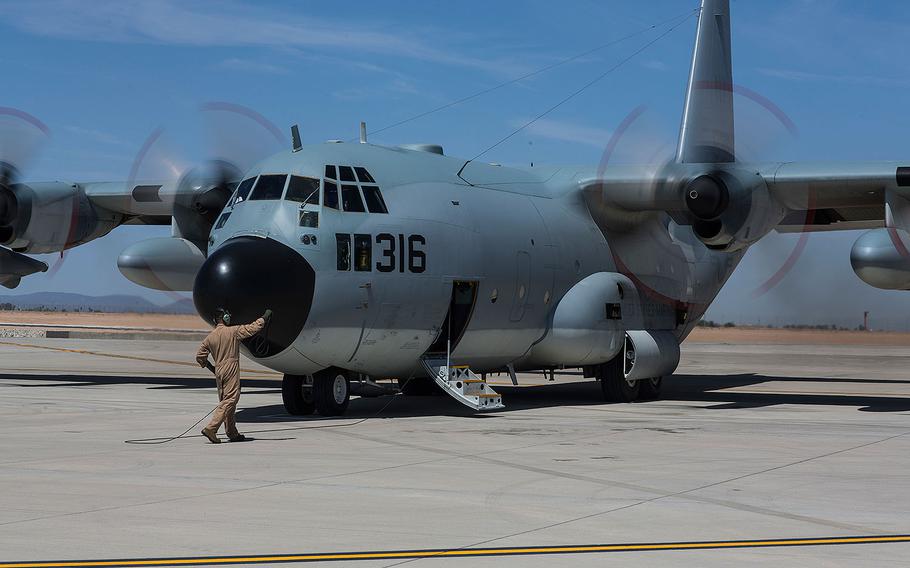 WASHINGTON — The Marine Corps Reserve has grounded its fleet of KC-130T tanker-transport aircraft indefinitely in the wake of the deadly crash earlier this month in Mississippi, a Marine spokeswoman said Thursday.

The stand-down of the service’s 12 KC-130Ts was ordered “out of an abundance of caution” as investigators continued to work to determine what led to the July 10 downing of the aircraft into the Mississippi Delta during a cross-country flight, said Marine 2nd Lt. Stephanie L. Leguizamon, a spokeswoman for Marine Forces Reserve. The crash was the deadliest Marine aircraft incident in more than a decade, leaving 15 Marines and a sailor dead.

The KC-130Ts are all based at Stewart Air National Guard Base in Newburgh, N.Y., and belong to Marine Aerial Refueling and Transport Squadron 452, Marine Air Group 49, 4th Marine Aircraft Wing.

It was not clear Thursday when the Marines stopped flying the bulky turbo-prop airplanes, which are built by Lockheed Martin, Leguizamon said. She said she also could not say how long the stand-down would last.

Leguizamon said the investigation into the crash was ongoing and she could not comment on it.

The preliminary investigation into the wreck that left two separate debris fields that each spanned more than a mile found problems began in mid-air, a Marine general said July 12.

The Marine Corps is in the midst of phasing out its remaining KC-130T aircraft in favor of the KC-130J, which has updated technology and better performance capabilities, according to Lockheed Martin.

Marine Aerial Refueling and Transport Squadron 452 is the only remaining Marine unit flying the KC-130T. It will begin transitioning to the newer model in 2019, according to the Marine Corps.

Nine of the Marines killed in the July 10 crash were air crew members with that squadron. The others killed were members of the Marines’ elite special operations 2nd Raider Battalion, including six Marine commandos and a Navy hospital corpsman attached to the unit stationed at Camp Lejeune, N.C.