Marines going back to old battlefield in Helmand 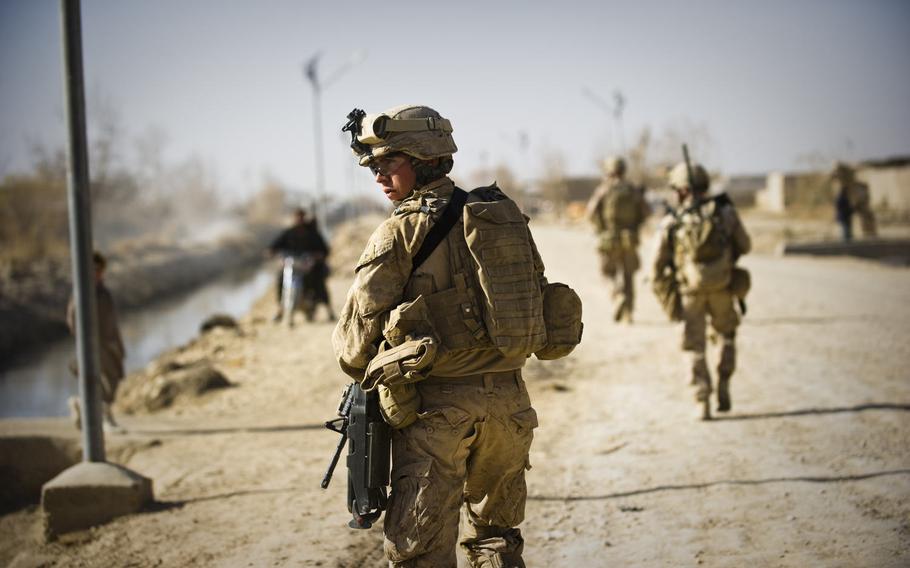 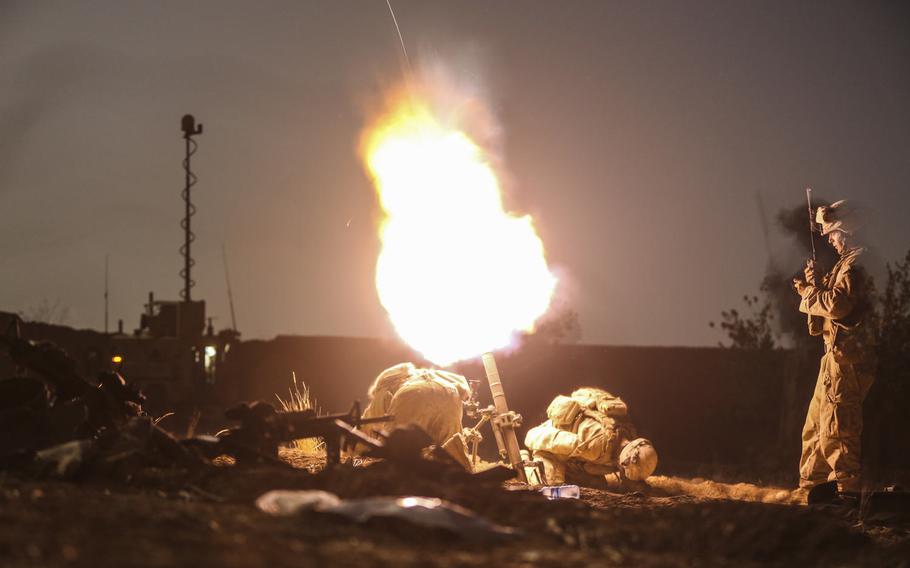 KABUL — When about 300 Marines deploy to Helmand this spring, they will be returning to a province where hundreds of U.S. servicemembers died over more than a decade to subdue the Taliban. Now the situation has deteriorated so significantly there are fears the province could fall to the Taliban.

Earlier this month, the district center in Sangin, where many Marines and British soldiers lost their lives, was again under siege, and local residents report the fighting there is continuing.

The incoming Marine force, dubbed Task Force Southwest, will be led by Brig. Gen. Roger Turner, who previously commanded Regimental Combat Team 5 on a combat tour in southern Helmand in 2011-2012.

The deployment marks the first time Marines, who had responsibility for Helmand from 2009 to 2014, will be back in the province since NATO forces pulled out two years ago

Brig. Gen. Charles Cleveland, chief spokesman for the U.S.-led NATO coalition, said the return of the Marines does not signal any significant change in the way NATO will be advising Afghan forces in Helmand.

A 300-member Marine team will replace an Army unit that has been advising and assisting Afghan forces. The Marine force will include more senior leaders to interface with their Afghan counterparts — a shift based on “lessons that we’ve learned,” Cleveland said.

But the Marines will find a far more challenging situation than the one they left when they handed over responsibility to Afghan forces.

After NATO pulled out in 2014, the Taliban upped their fight to retake Helmand, their primary stronghold in the country. Today, most of the province is under their control.

The Taliban’s gains have netted them more than territory. Helmand is the center of the lucrative opium poppy trade, and Taliban control has opened smuggling routes to neighboring Pakistan.

Should government forces lose the province entirely, the Taliban would gain a launchpad to threaten Kandahar, the largest city in the south. That could make them less interested in peace talks with the Afghan government and ultimately scuttle the stalled peace process.

The crisis of confidence resulting from such a loss could rupture the tenuous alliances knitted over the past 15 years among the country’s myriad factions, warlords and ethnic groups, experts say, which in turn could plunge Afghanistan back into civil war.

“Helmand continues to be a top concern,” Gen. John Nicholson, commander of the U.S.-led coalition, said at a news briefing in December.

Much of the crisis in Helmand stems from the same problems of corruption and inefficiency that have dogged the international mission in Afghanistan since the Taliban fell in the U.S.-led invasion of 2001.

In a speech Wednesday in Washington, the Pentagon’s chief Afghanistan watchdog, said the Afghan army division stationed in Helmand “disintegrated” just a year after NATO pulled out.

John Sopko, the Special Inspector General for the Reconstruction of Afghanistan (SIGAR), said corruption and poor leadership left the army and police unable to defend the province.

It “seemingly caught everyone by surprise,” Sopko said.

The security forces began struggling after foreign combat troops left at the end of 2014. NATO dispatched a handful of advisers back to the province the following February. That summer, a slightly larger “expeditionary” advising team went in as well.

But the Taliban kept up the pressure, and by fall, the situation had worsened. Insurgents had seized control of Musa Qala and Naw Zad and were laying siege to army bases. By Christmas, even Lashkar Gah was under attack.

Earlier that fall, President Barack Obama decided Afghanistan remained too fragile for a complete pullout, and he authorized 5,500 troops to stay on past 2016.

NATO subsequently dispatched an Army advising task force consisting of several hundred troops to Helmand. Meanwhile, the 215th Corps underwent a restructuring in which the unit’s commander and other top leaders were replaced.

A NATO spokesman told The Associated Press at the time that the unit was rife with “corruption, incompetence and ineffectiveness.”

Army and police roles were inflated by “ghost soldiers” who did not exist but whose salaries were siphoned off by corrupt officers. Supplies like fuel and ammunition were diverted for sale elsewhere, sometimes even to the Taliban.

Undermanned and under-resourced, checkpoints were easily overrun, allowing the Taliban to scoop up gear abandoned by fleeing troops. In February, The New York Times reported that insurgents had seized between 50 to 100 U.S.-supplied Humvees and were using them in attacks on Afghan forces.

Even with the restructuring, leadership problems in the 215th Corps persisted, and in the fall, the unit’s commander was replaced again.

“It is troubling,” Sopko said in his remarks on Wednesday, “that the commander hand-picked to clean up the security forces’ act in Helmand had to be replaced so soon after his appointment.”

SIGAR is responsible for ensuring that U.S. reconstruction funds, including those underwriting Afghan forces, are spent effectively and not wasted.

This past year, the Afghan security forces, with input from NATO, architected a conservative approach to the fighting, one focused on protecting population centers and major roads while avoiding battles in less important locations.

A report released by SIGAR this week in conjunction with Sopko’s talk suggested that strategy may have contributed to Taliban gains. In less critical areas, the report said, Afghan forces will “disrupt insurgent operations when resources permit, but will no longer seek to hold on or fight for those areas.”

Today, the Taliban outright control half of Helmand’s districts, according to Omar Zwak, the provincial governor’s spokesman. In the rest of the province, they control everything but district centers themselves. In some of those places, government convoys can’t pass overland, and the centers must be resupplied by air.

According to local residents, the Taliban now enjoy freedom of movement, traveling about in easily identifiable convoys with seemingly little fear of being hit from the skies. They are also able to cut off major roadways and supply routes, including the important thoroughfare that connects Lashkar Gah to Kandahar.

“People are living in fear,” said Haji Ghulam Nabi, a tribal leader living in Lashkar Gah. “There is a lot of uncertainty about what will happen next.”