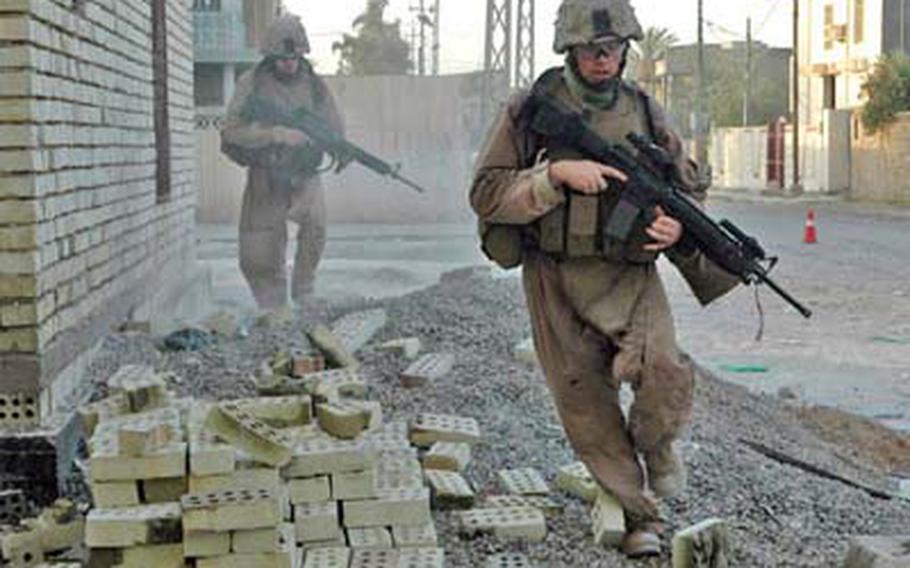 Each time they found the same things: One, the suspected bomb was a decoy &#8212; a muffler wrapped in plastic; two, no one would admit to seeing anything; and three, the Marines were now targets in a sniper&#8217;s scope.

One time the sniper&#8217;s bullet tore through a Marine&#8217;s calf, sending him home for good just three weeks into his tour. Another time a sniper shot a bomb disposal expert in the face, blinding him in one eye.

The Reserve infantrymen dodged a combination of rifle potshots and rocket-propelled grenades Wednesday as they tried to root out the sniper in an aggressive search of Fallujah&#8217;s most unfriendly street corner. The episode was typical of the harrowing cat-and-mouse contests Marines and insurgents wage against each other here on a regular basis.

As part of the 1st Battalion, 25th Marine Regiment, or &#8220;New England&#8217;s Own,&#8221; Connecticut-based Company C is tasked with keeping the peace in Fallujah&#8217;s worst neighborhoods. While life in this city of 200,000 has improved greatly since Marines and Iraqi army troops recaptured it from insurgents more than a year ago, Marines remain frustrated by the refusal of some residents to share information that would help them capture or kill insurgents &#8212; particularly those who target bomb disposal teams.

&#8220;It&#8217;s not like these people are all bad,&#8221; said Sgt. Jared Taylor, 27, of Middletown, Conn., a history student. &#8220;A lot of them are victims of circumstance. If they help us, something will happen to them. The Iraqi police tell us stories about insurgents killing babies or cutting their eyes out if people cooperate with us. It&#8217;s a really frustrating situation.&#8221;

On Wednesday, that frustration was running high as Company C&#8217;s 1st Platoon found itself in the sniper&#8217;s sights once again.

The episode began around 4 p.m., as a 1st Platoon Marine fired shotgun slugs at the locks on an automotive shop just a few blocks from the sniper&#8217;s &#8220;sweet spot.&#8221; The platoon&#8217;s mission was to search a hidden, underground chamber at the site.

By coincidence, a bomb disposal crew was checking out a suspected roadside bomb on the sniper&#8217;s favorite block. When the bomb turned out to be a muffler wrapped in plastic, the commander of 1st Platoon decided to take action.

Within minutes, the main roadway through the neighborhood was echoing with the noise of small explosions and shotgun blasts as Marines blew the locks on a row of businesses where the decoy bomb was dumped.

In a small bakery, Marines discovered a magazine that an interpreter identified as insurgent propaganda.

Marines dumped racks loaded with thousands of toasted sesame rolls, spilling the treats onto the floor. Chairs and papers flew over room dividers and a desk was flipped on its side. Loud crashes and the clamor of banging metal rang from the rear kitchen. When the noise subsided, a Marine appeared with his legs and arms covered in a heavy dusting of flour.

Next to the bakery, Marines rammed a Humvee into the locked tin curtain of a market.

Around the corner, Marines had lined up a dozen young Iraqi men. Adams, an FBI special agent, addressed them through an Iraqi interpreter. He asked if they saw anything. The men, whose eyes darted about nervously, said nothing.

Adams then left the men to contemplate his comments. Their reflection was brief, however.

Within moments, a loud blast echoed down the street and the sound of gunfire erupted. The Iraqis shoved and elbowed each other as they stampeded for cover.

Seconds before the explosion had scatted the Iraqis, Cpl. Cleveland Atwater, 29, of Garfield, N.J., was outside of his Humvee pulling security when the turret gunner began shouting.

The Shop Rite store manager spun his head around to see a man dashing across the street.

When he saw the projectile was headed for his legs, Atwater performed what he described as a Michael Jackson &#8220;Thriller&#8221; maneuver. Rising up on his toes and bending his knees forward, the Marine just avoided the rocket, while its super-heated exhaust brushed the back of his legs.

After streaking past Atwater, the rocket-propelled grenade slammed into the ground and skittered down the roadway, a dud.

At roughly the same time, a second insurgent had fired another RPG. This one exploded in front of the Marines&#8217; security cordon, sending an orange traffic cone flying and sending the line of Iraqi men fleeing.

Some time later, Marines were back out in the street, charging toward the sound of gunfire. Part of the platoon had spotted an insurgent with an RPG at the opposite end of the street and fired at him before he could shoot his weapon. He escaped.

As one group of Marines was running toward this gunfire, however, the sniper made an appearance. Lance Cpl. Brian Giessler, 24, of Smithfield, R.I., saw flashes of light and puffs of dust coming from a third-story balcony of a deserted building at the end of the street. The shots missed, however, and the Marines found cover behind the corners of buildings and other structures.

By the time they had made their way into an apartment building directly opposite the sniper&#8217;s perch, it was clear that the gunman had fled.

The platoon returned to base, exhausted and drained of adrenaline.

Looking back on the day&#8217;s events, Porylo said he hoped that maybe one of the Iraqis who was at the corner that day might eventually help identify the insurgents responsible. He acknowledged that &#8220;tossing&#8221; the bakery was a tactic that could work for and against the Marines.