Marines give moms, dads more time off with update to parental-leave policy 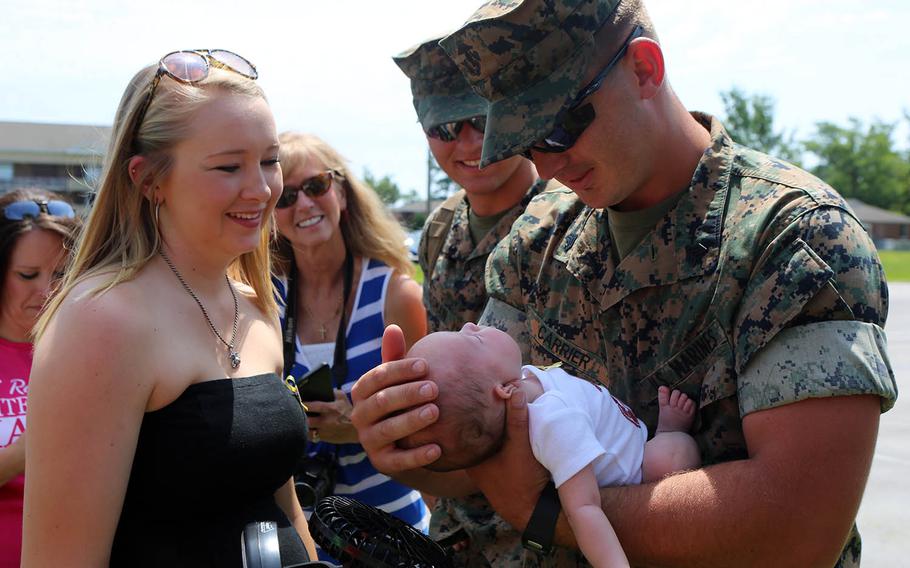 The Marine Corps has updated its parental-leave policy, allowing primary and secondary caregivers to take more time off after a birth or adoption. (Shannon Kroening/U.S. Marine Corps)

The Marine Corps has changed its parental-leave policy so that new mothers and fathers can spend more time with their children.

The update – which went into effect June 14 and can be used by parents whose children were born as far back as Dec. 23, 2016 – adds six weeks of primary caregiver leave that can be taken in conjunction with six weeks of maternity leave, according to the new policy.

The service defines a primary caregiver as the parent primarily responsible for the care of a child in the case of a qualifying birth or adoption.

Primary caregiver leave, which can be delayed for up to one year, can also be transferred to the other parent for dual-military couples, the policy says.

Another major change increases paternity leave – now called “secondary caregiver leave” – from 10 to 14 days. Marine fathers who have taken 10 days of paternity leave since Dec. 23, 2016, will be given an additional four days.

“It's difficult to keep up on everything, and I find that I let a lot of things slip that I'm not comfortable with,” she said. “I think that they should keep increasing the leave for fathers. Fourteen days is not enough recovery time for mom, nor bonding time with the new baby for dad.”

Bailey, whose daughter is less than a month old, said fathers miss a lot because they are forced to return to work so quickly after a birth.

“I honestly believe that if they had more time off to bond with the baby and to strengthen their relationship with the mother of their child, they wouldn't feel like they are missing the best parts of their children’s lives,” she said. “Less stress at home means better productivity and career progression.”

The updated policy requires Marines to identify the primary and secondary caregiver are as “early as practical,” preferably within 60 days of the anticipated delivery date or date of a qualifying adoption.

The policy also applies to parents designated as a primary caregiver who adopted a child during the retroactive period. For example, if a parent has already taken 21 days of adoption leave, an additional 21 days are now authorized. Retroactive leave requests must be taken within 18 months of the birth or qualifying adoption, the policy says.

The decision follows similar changes made by the Air Force two weeks ago. Both policies apply to birth mothers, fathers, same-sex couples, and adoptive or surrogate parents.