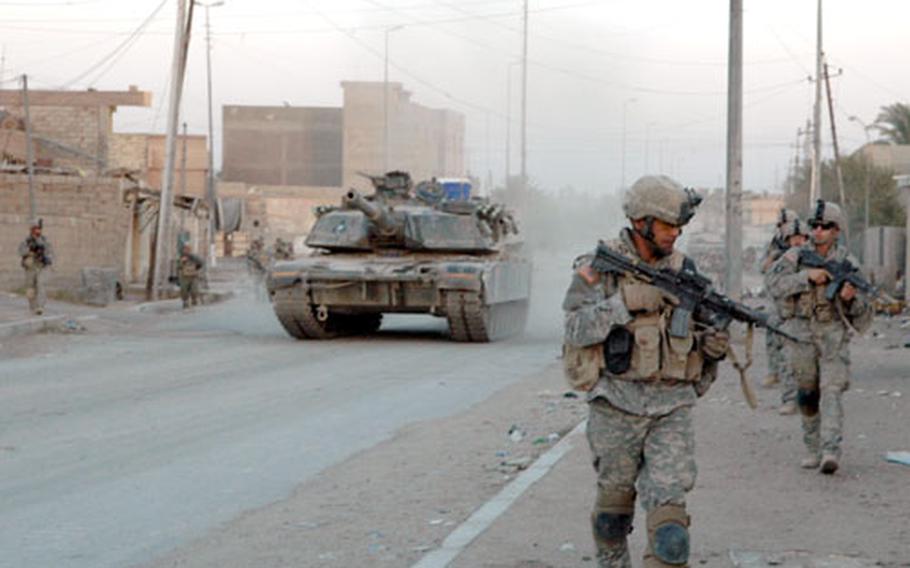 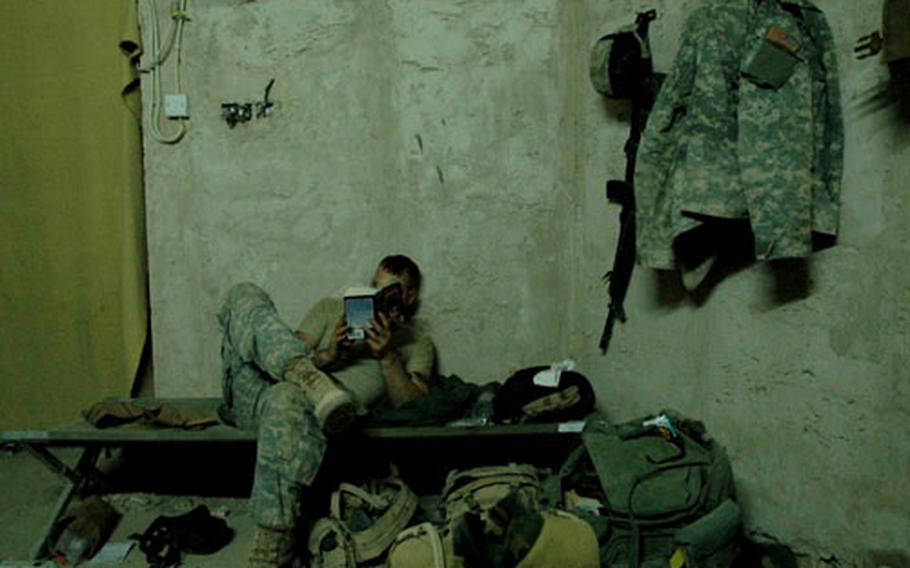 For roughly two months now, Bajema&#8217;s Bulldog Company has made its home in one of Ramadi&#8217;s most violent neighborhoods &#8212; an area that previous Marine and Army units had long ago given up to insurgents.

While Combat Outpost Falcon has endured periodic sniper, mortar and rocket-propelled grenade attacks, it has also allowed Bajema to confront the enemy more rapidly and more effectively than if he launched periodic patrols and operations from sprawling Camp Ramadi, a forward operating base on the city&#8217;s fringe.

The creation of COP Falcon, as well as a handful of other combat outposts throughout Ramadi, marks a radical departure from past U.S. military practices here that focused on defending a main thoroughfare through town and its embattled government center.

Under the command of Col. Sean MacFarland of the 1st Brigade, 1st Armored Division, Bajema&#8217;s company and a handful of others have taken up permanent residence in what one commander called Ramadi&#8217;s &#8220;heart of darkness&#8221; in a bid to regain control of the city.

The campaign has been a costly one. More than 30 soldiers, Marines and special operations personnel have been killed in the fighting in the last two months. But commanders say they have dealt a very heavy blow to insurgents here and have &#8220;compressed&#8221; them into an ever-shrinking tract of real estate in the city&#8217;s center.

The strategy, which is a variation of the so-called &#8220;ink blot&#8221; or &#8220;clear, hold and build&#8221; campaigns employed in Fallujah and Tal Afar, is aimed at driving out or killing a particularly tenacious population of insurgents without emptying the city of its civilian population. Commanders hope to avoid destroying much of the city in a large, pitched battle.

The combat outposts, which in some cases occupy entire city blocks of seized Iraqi homes, are used as launch pads for routine patrols and combat operations. Owners of the seized properties are paid monthly rent.

Commanders say their goal is to cut off the enemy&#8217;s primary routes of travel and to engage insurgents frequently where they live. The last few weeks have seen the use of heavy armor and bombs dropped from aircraft to destroy insurgent positions.

At the same time, commanders say they are working to build up local Iraqi police and army units who, they hope, will inherit a far less dangerous city. Troops under the 1st Brigade have also tried to gain the public&#8217;s cooperation by handing out water and electric generators to families living near the outposts. But getting Ramadi residents to cooperate has been extremely difficult. Intimidation by insurgents has made them extremely reluctant to share information on insurgent activities, commanders say.

Ramadi, a city with a population of roughly 400,000, sits at the westernmost corner of the Sunni Triangle and, for much of the Iraq conflict, has been a focus of the Sunni-led insurgency. The insurgents&#8217; use of increasingly sophisticated and destructive roadside bombs also made Ramadi the front line in the U.S. military&#8217;s elaborate, technological battle against the devices.

While Ramadi is the seat of government in Anbar province and occupies a highly strategic position on the main travel route between Baghdad and the Syrian and Jordanian borders, U.S. forces have been hard pressed to defend it.

Ramadi falls within a heavily Sunni area where a certain percentage of the population feels it has hasn&#8217;t gotten its fair share from Iraq&#8217;s transition government, said Lt. Col. Kevin Foster, deputy operations officer of the Marine Expeditionary Force I, which exercises control of forces within Anbar.

The prior outfit in Ramadi, the 2-28 Brigade Combat Team, a Pennsylvania National Guard unit, had attempted to isolate insurgents and limit their movement around Ramadi by establishing a network of control points on the city&#8217;s periphery. The strategy was to some extent successful, 1st AD commanders say, but needed to be expanded. Also, the 2-28, which had a Vermont National Guard armor unit attached to it, did not establish a permanent presence in the city.

Much of the current effort has so far involved the 1-37 &#8220;Bandits,&#8221; who created COP Falcon in mid-June. Prior to Ramadi, the 1-37 pursued a very different mission in Iraq&#8217;s comparatively peaceful north, in Sinjar, near the Syrian border. Efforts there focused on civil affairs operations instead of combat missions and commanders say the change has been a 180-degree turn for the Bandits, as well as other 1st AD units previously in Tal Afar.

The use of heavy armor within the city gives them a leg up that other units have not had, Bandit soldiers say.

While 70-ton Abrams tanks are not immune to roadside bombs, the behemoths do give Bandit troops a greater sense of security than Humvees, and commanders have not hesitated to target snipers and bunkered insurgents with the tanks&#8217; main guns.

However, in the days leading up to the campaign&#8217;s kickoff, one 1-37 officer said the Bandits&#8217; arrival in Ramadi, as well as their plan to establish an outpost in the city&#8217;s downtown, met with skepticism from some combat units already operating here.