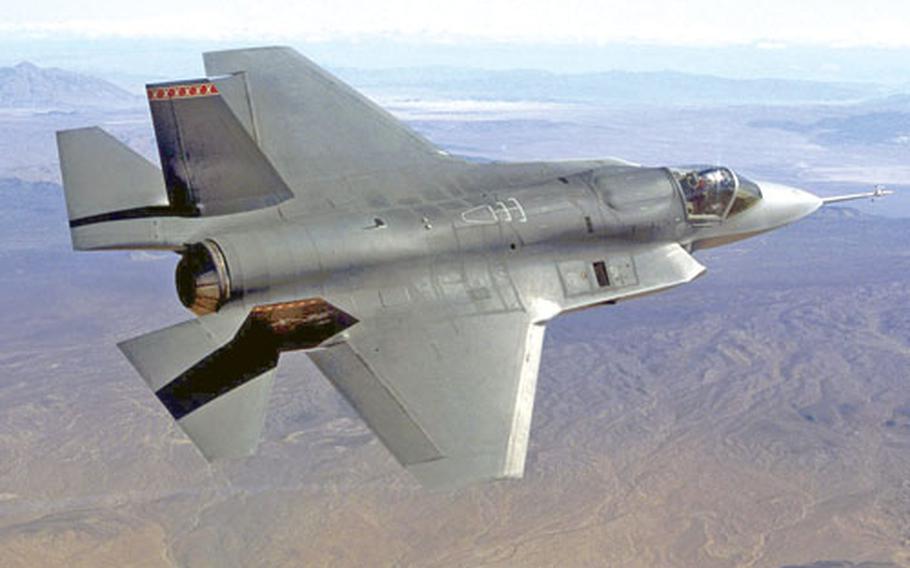 The F-35 is a single-seat, supersonic, stealthy aircraft that is to be used in a variety of missions, such as air-to-air combat, ground attacks and the suppressing of enemy air defenses. (Northrop Grumman Corp. / AP)

The military&#8217;s next stealth fighter jet, the versatile F-35 or Joint Strike Fighter, is slated to roar into action in 2012 when it enters service with the Marines.

The Air Force, which recently named 10 instructor pilots to help start the program, will be the next service to fly the single-engine multirole aircraft in 2013.

The Navy will start flying it in 2015, officials with the Joint Strike Fighter Program said in an e-mail. Eight other countries have partnered with the United States on the program, including the United Kingdom, Italy, Canada, Australia, Turkey and Denmark. Israel and Singapore are in talks to purchase the aircraft as well.

There will be three variants of the F-35, also known as Lightning II, in the U.S. military&#8217;s service. The Air Force version is the F-35A, the Marines will fly the F-35B and the Navy will operate the F-35C.

"We see this aircraft as having game changing technology that makes our vision of an all-STOVL (short take-off and vertical landing) force possible," Marine Corps Maj. Eric Dent said. "The F-35B is a fifth generation fighter that will provide a quantum leap in capability, basing flexibility, and mission execution across the full spectrum of conflict."

The Marine Corps is purchasing a vertical short takeoff and landing version to replace its aging AV-8B and early F/A-18 models. That Marine F-35B, featured in the latest "Die Hard" movie, uses a rotating rear engine nozzle and a lift fan behind the cockpit for vertical takeoffs and landings and to hover. The price tag for the Marine version is expected to cost in the upper $80 million range. And the Navy version, which will be capable of operating from aircraft carriers, is expected to cost more than $90 million.

The Marines and Navy expect to purchase a total of 680 aircraft. It will complement the F/A-18 E and F in the Navy&#8217;s service, but offer those services something they have never had before.

"It is a stealth fighter. The planes that it is replacing are not stealthy airplanes," said John Martin, a spokesman for Lockheed Martin&#8217;s F-35 program. "This is the first time that the Navy and Marines will have a stealth aircraft."

The Air Force version is a conventional takeoff and landing aircraft that is expected to be the cheapest variant in the U.S. inventory with a cost in the upper $60 million range. The Air Force wants to buy 1,763 JSFs to replace its F-16s, A-10s and to complement the F-22 Raptor.

Despite the advances the F-35 has over the planes it is designed to replace, the program has its controversies.

The aircraft&#8217;s noise and performance are two of the major criticisms of the project.

A report in the Arizona Daily Star in Tucson, Ariz., reported that the plane could be a dozen times as loud as the A-10, several times louder than an F-16 and twice as loud as F-15s on takeoff. And the Pensacola (Fla.) News Journal, near Eglin Air Force Base &#8212; one of the bases where the plane is likely to be based &#8212; reported that the nearby city of Valparaiso has filed a lawsuit against the Air Force to learn more about the F-35&#8217;s potential impact on that community.

According to a September 2008 Los Angeles Times article, Australian media reports indicated that the F-35 was defeated by a Russian Sukhoi jet in computerized simulations. Lockheed Martin Corp. and the Air Force have denied those reports.