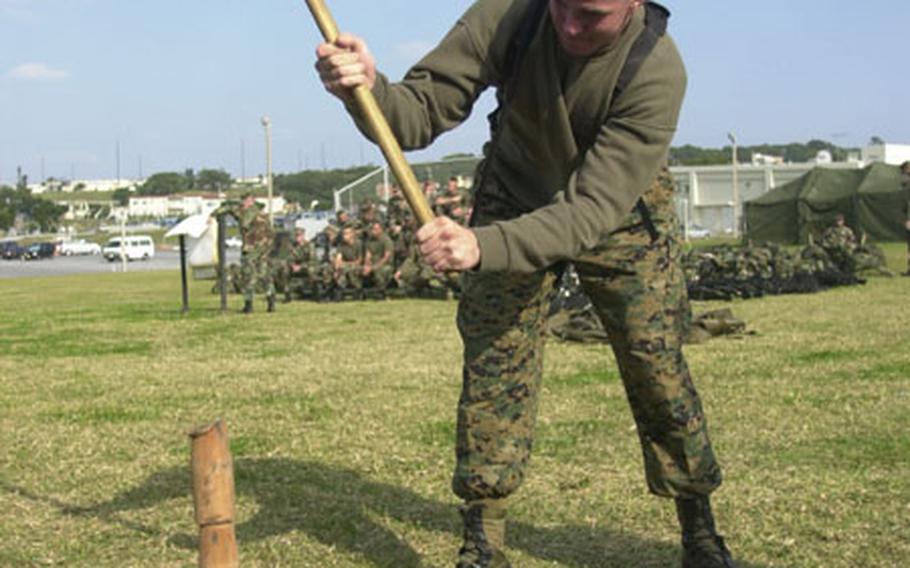 Marine Sgt. Brian Hatfield drives tent stakes into the ground with a sledgehammer during a "shakedown" period for a Marine support unit on Okinawa. (Mark Oliva / S&S)

Marine Sgt. Brian Hatfield drives tent stakes into the ground with a sledgehammer during a "shakedown" period for a Marine support unit on Okinawa. (Mark Oliva / S&S) 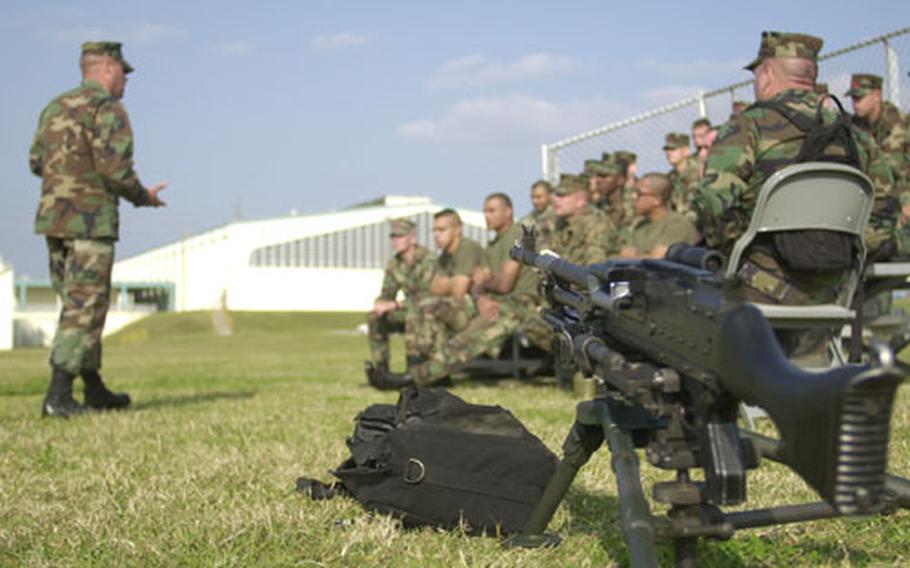 CAMP FOSTER, Okinawa &#8212; Marine Sgt. Brian Hatfield hoisted a heavy sledgehammer toward the sky. It wavered aloft a moment before he brought it back to Earth. With a loud thud, it slammed against a thick, wooden stake.

Marines leaned back on ropes, pulling their large, green tent taut. This would be their home for the night. It wasn&#8217;t exactly luxury, but it wasn&#8217;t roughing it in the boondocks, either.

The chow hall was a few hundred yards away. A convenience store sat up the road. Still, it would be a hundred miles from civilization, if Hatfield had his way.

Hatfield&#8217;s unit, Combat Service Support Detachment 38, a composite group of about 100 Marine engineers, heavy-equipment operators, mechanics and other support personnel, took to field living for a few days here in a sort of shakedown before they deploy. They&#8217;re scheduled to leave for a Philippine marine base in Ternate, where they will participate in a Philippine interoperability exercise scheduled for next month that seeks to improve U.S. and Philippine forces&#8217; ability to work with each other.

&#8220;The best possible thing you can do is make sure everything works and you have all the parts you need before you go. From here, it also helps to get the Marines in the mind-set of our duties in the field.&#8221;

The weeklong field trials for the Marines and their gear constitute a sort of predeployment shakedown. From rifles to giant forklifts and water purification units, they&#8217;re putting every piece of gear and every Marine through the paces.

Hoses were strung out across open fields so Marines could start making clean water while classes on rear-area security and patrolling were being conducted.

Atop the field training, the Marines are performing their traditional duties as mechanics and engineers away from the warehouses and tool shops the bases offer. If something breaks, there&#8217;s no going back for a spare part.

Marine Cpl. Jeff Newton said even the setup was challenging. He&#8217;s put in his time setting up the old canvas general-purpose tents but the ones he worked with this day were a new style: Large, wooden tent poles were replaced by angled and adjustable metal frames.

Hatfield watched as the minicamp took shape. The work was just beginning, he knew, but he was looking forward to shakedown time with his Marines.