Marines forgot to bring chess set on Philippines mission, so they improvised 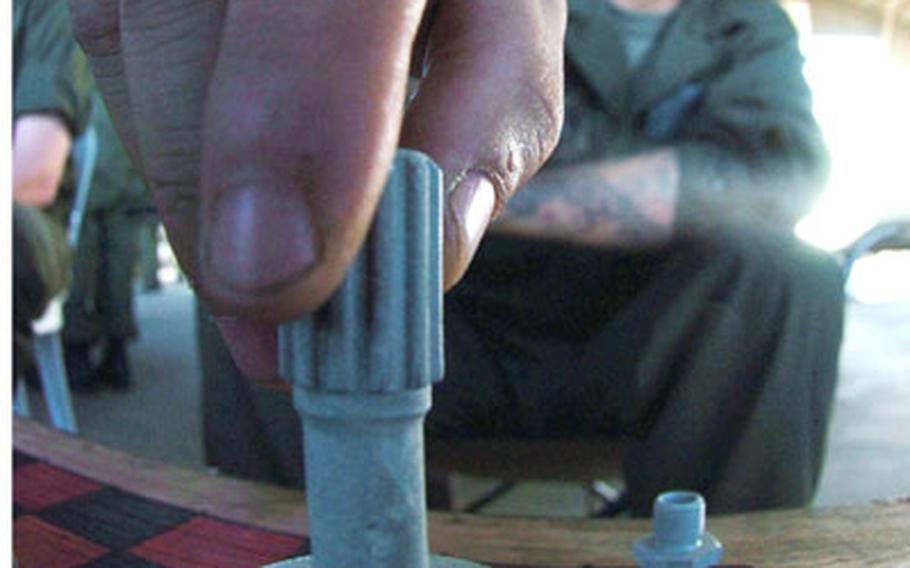 CLARK AIR BASE, Philippines &#8212; Arriving to a humanitarian mission without their beloved chessboard to keep them busy, some helicopter squadron Marines got creative.

Using the bottom of a wooden &#8220;7-cube&#8221; supply box for a board, spare helicopter parts for pieces and some imagination, they made their own.

The board is drawn with red and black markers on the box. Spare helicopter parts, spray painted with black and gray primer, serve as chess pieces.

A rotor positioning motor spline made the perfect king. Bolts and other assorted pieces make up the rest.

The game provides a welcome diversion for those left behind while Marines ferry relief effort supplies. More than 600 Marines, sailors and airmen are in the region assisting relief missions after a series of storms devastated parts of the Philippines.

The small group of chess players from MMH 262 has expanded to about 20 as enthusiasts walk by and join.

&#8220;We&#8217;re not bored but we have a lot of downtime,&#8221; said Lance Cpl. Benjamin Hayward, an armorer with 3rd Force Service Support Group from Camp Hansen, Okinawa, who hands out and collects weapons each day.

Besides chess, Marines brought books, decks of cards and a few basketballs to occupy their time.

After about a week in the Philippines, the chessboard is serving them well.

Players&#8217; names and statistics are tallied on the box besides the chessboard. Winners don&#8217;t earn much though, Shannon said.