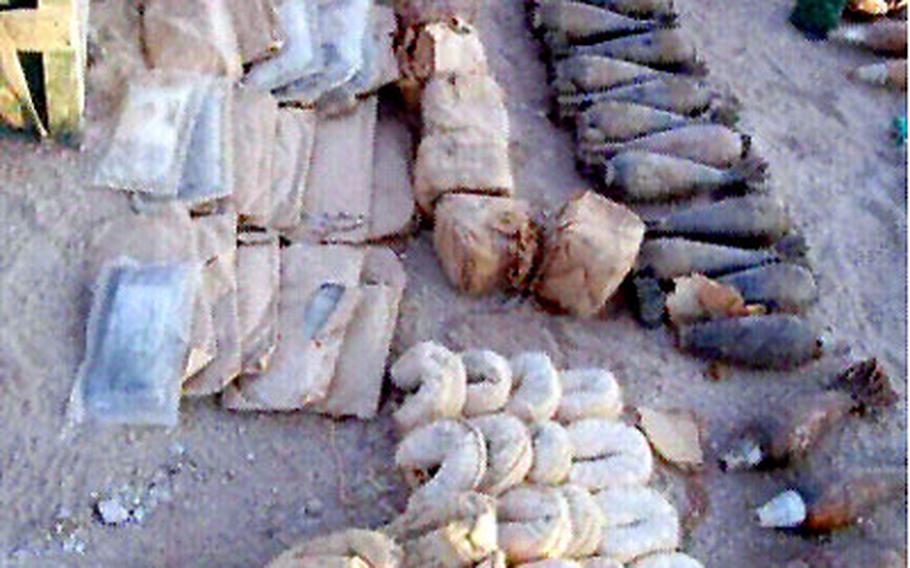 U.S. Marines operating near Fallujah uncovered more than 1,000 artillery and mortars rounds among the ten metric tons of weapons and explosives found during a week of sweeps. (Courtesy of U.S. Marine Corps)

The operation was led by Marines from 1st Reconnaissance Battalion, Regimental Combat Team 8 and focused on a village called Latifiyah, about 25 miles south of Fallujah. The weight of the weapons found in the caches was more than 10 metric tons, according to Marine officials at Camp Blue Diamond.

Most of the weapons were found buried in shallow pits along the Euphrates River, the Marines said. Insurgents have long been suspected of using the river to transport weapons and fighters along a corridor of western Iraqi towns in Anbar province and into Baghdad.

In Tikrit, soldiers from the 1st Brigade, 101st Airborne Division found a pair of roadside bombs on New Year&#8217;s Day, after getting tips from local residents. The troops arrested five people who the tipster said were involved in planting the devices.

In Mosul, soldiers of the 172nd Stryker Brigade Combat Team found two more bombs; one detonated, wounding a soldier. The other was detonated by an explosives team.