Marines find life in former morgue ‘cool,’ but not quiet 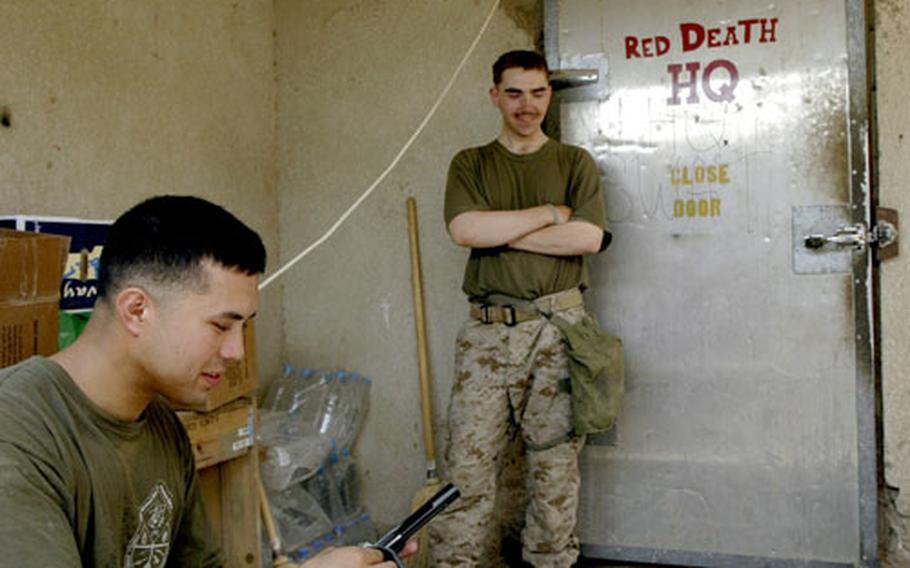 Marine Sgt. Dean Long, left, and Lance Cpl. Noah Welter take a break at Operation Post Omar. The heavy refrigerator door beside Welter was the entryway to an Iraqi morgue cooler, but now serves as the door to the Marines’ living area. (Monte Morin / S&S)

Marine Sgt. Dean Long, left, and Lance Cpl. Noah Welter take a break at Operation Post Omar. The heavy refrigerator door beside Welter was the entryway to an Iraqi morgue cooler, but now serves as the door to the Marines’ living area. (Monte Morin / S&S) 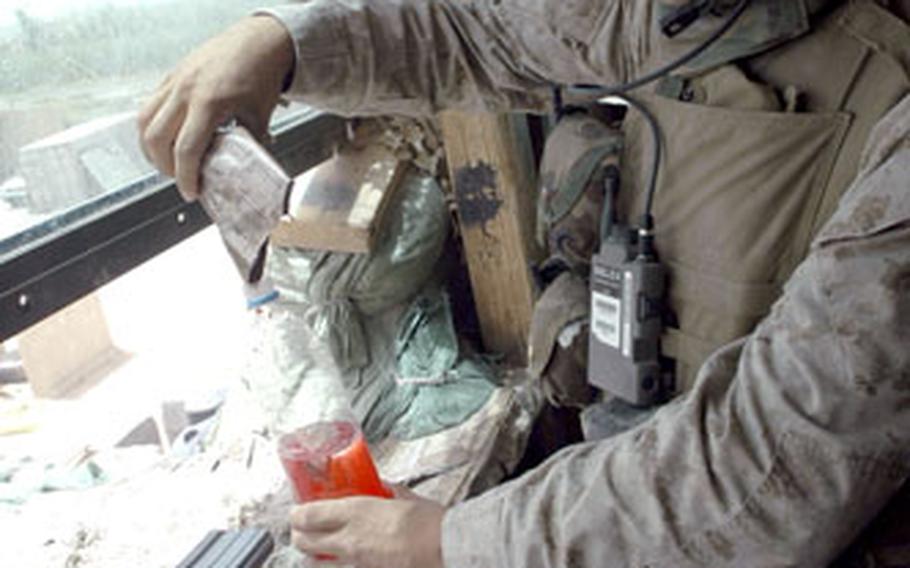 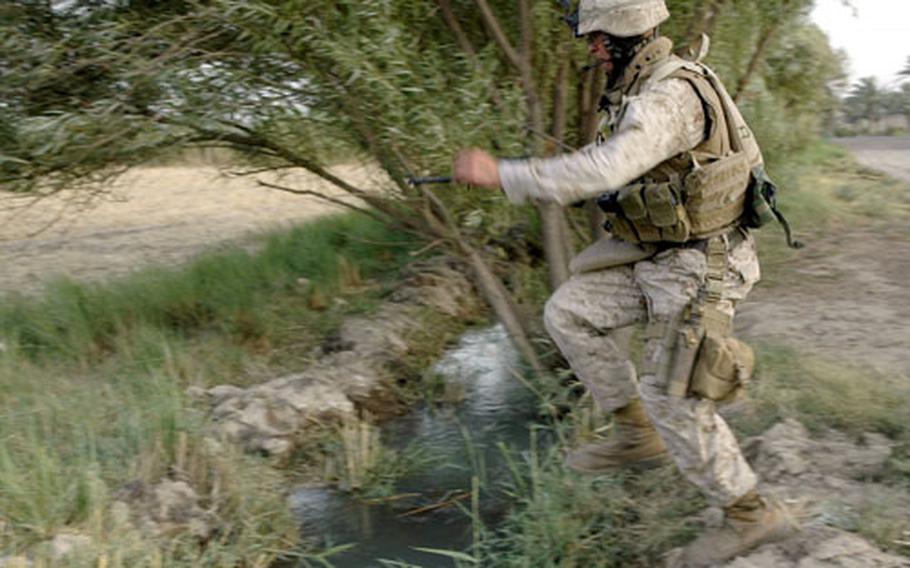 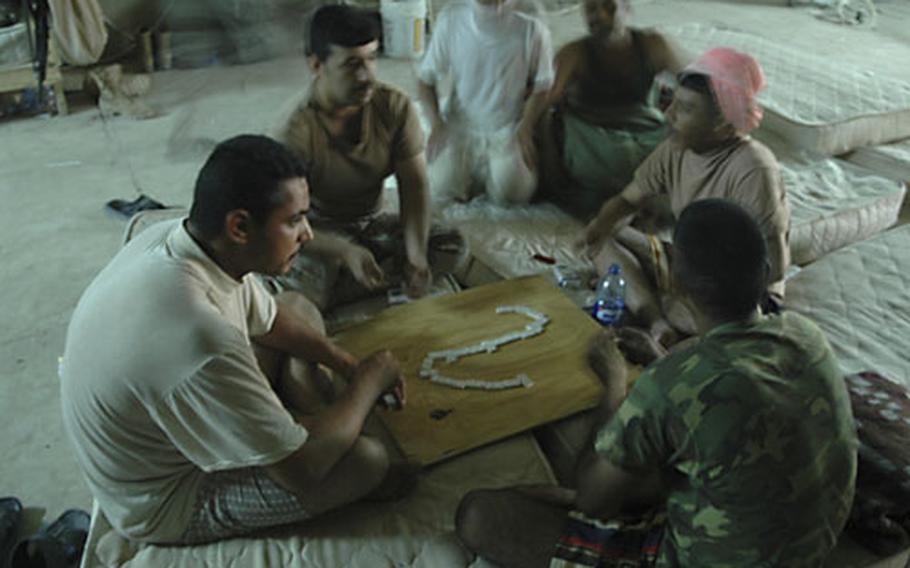 Iraqi army soldiers relax between patrols at Observation Post Omar, north of Fallujah, Iraq, recently. U.S. Marines are preparing to hand the outpost over to a battalion of the 1st Iraqi Army Division. (Monte Morin / S&S) 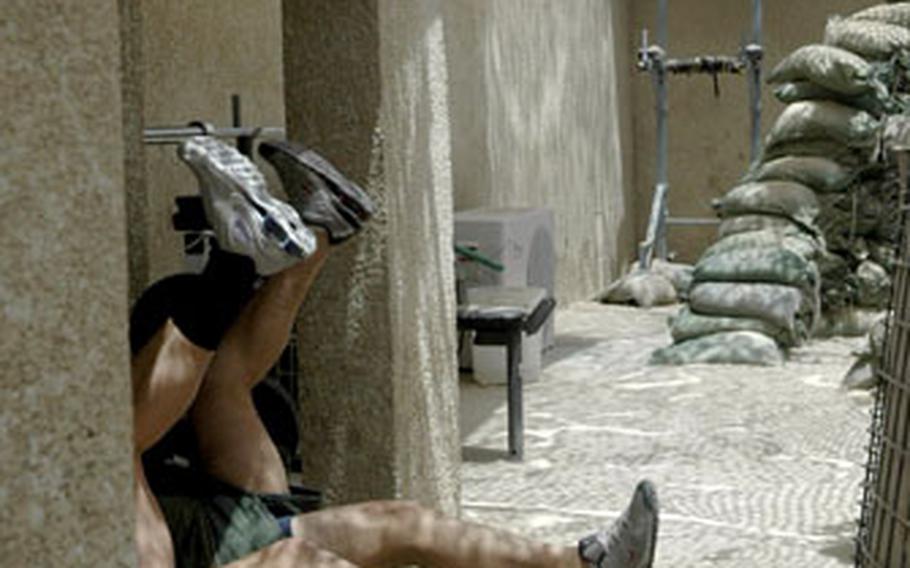 Marines exercise in the shadows of a former Iraqi morgue that is now known as Observation Post Omar in western Iraq. (Monte Morin / S&S)

OBSERVATION POST OMAR, Iraq &#8212; Sleeping inside a vast refrigerator definitely has its advantages in Iraq, especially when the summer sun pushes daily temps toward the 120-degree mark.

Of course, some folks might actually lose sleep when they realize their heat-resistant bedroom used to house hundreds of chilled, dead bodies.

For the Marines of 3rd Platoon, Company A, 1st Battalion, 1st Marine Regiment, moving into an old Iraqi government morgue just north of Fallujah was a vast improvement over past accommodations, if not a little unsettling.

Initially, the Marines would simply set up camp in an abandoned building and conduct patrols and operations for Regimental Combat Team 5 on a weekly rotation. Eventually, Company A moved into the morgue and dubbed the walled compound &#8220;OP 4.&#8221;

Now, with less than a month remaining before they return home to Southern California&#8217;s Camp Pendleton, Marines are preparing to hand the outpost over to a battalion of the 1st Iraqi Army Division. The name of the post has already been switched to OP Omar, in honor of a fallen Iraqi army soldier.

Third Platoon, as well as the rest of Alpha Company, has so far been lucky enough not to lose a Marine during this Iraq tour. By contrast, the rest of the battalion has lost 10 Marines.

The compound had the dubious distinction of appearing on a jihadist Web site several months ago. In chilling video footage set to music, an insurgent sniper wounded both a U.S. Army soldier and a Marine who were tinkering with a radar unit on a roof at the compound.

In another instance, members of a supply convoy narrowly escaped death when a mortar shell arced into the compound, punched through the roof of their Humvee and out the driver&#8217;s side window and exploded on the ground. The Marines&#8217; heads were ringing, but all avoided serious injury.

OP Omar occupies an area of lush farmland and large homes along the Euphrates River Valley &#8212; an area that 3rd Platoon members have come to know like the back of their hands after conducting more than 600 patrols and a census of residents.

Marines said that the unit they replaced was less enthusiastic about making connections with local residents, and that Company A worked hard to put the residents&#8217; fears at ease.

Currently, only 3rd Platoon remains at OP Omar. The rest of Company A relocated to areas west of the compound. Now, 3rd Platoon Marines share OP Omar with more than 100 Iraqi army soldiers who moved in two weeks ago. The Marines have been accompanying the Iraqis on patrols in order to advise them.

While Marines say they are happy to be turning over territory to the Iraqi army, they weren&#8217;t as thrilled about sharing a base with the new Iraqi soldiers. With a number of them fresh out of training camps, the Iraqi soldiers occupied their free time by watching endless war movies on a large screen television, with Marines asking them repeatedly to lower the volume.

Other Marines have chafed at the Iraqi soldiers&#8217; penchant for throwing trash on the ground in the compound, and for refusing to stand while on guard duty.

For sergeants like Long and Pat Delahante, who both served in the Iraq invasion three years ago, this most recent tour was a time of adjustment. When they first visited Iraq, their job was to pull their trigger before the enemy did. Now, their job is to decide whether or not they and their squads should pull their triggers at all.

Long said the Marines review very specific rules of engagement every two weeks. He said that his platoon has had to fire their weapons only on a couple of occasions and has not yet had to kill anyone.

Those who were serving in Iraq for their first time, however, said their tour at OP Omar was not as difficult as they had anticipated.

Lillienthal, who hopes to attend medical school after he leaves the service, said he feels a sense of accomplishment from his time spent in Iraq. While Army and Marine units throughout Iraq are struggling to hand over territory to the infant Iraqi army, his company and his platoon had fulfilled its mission.