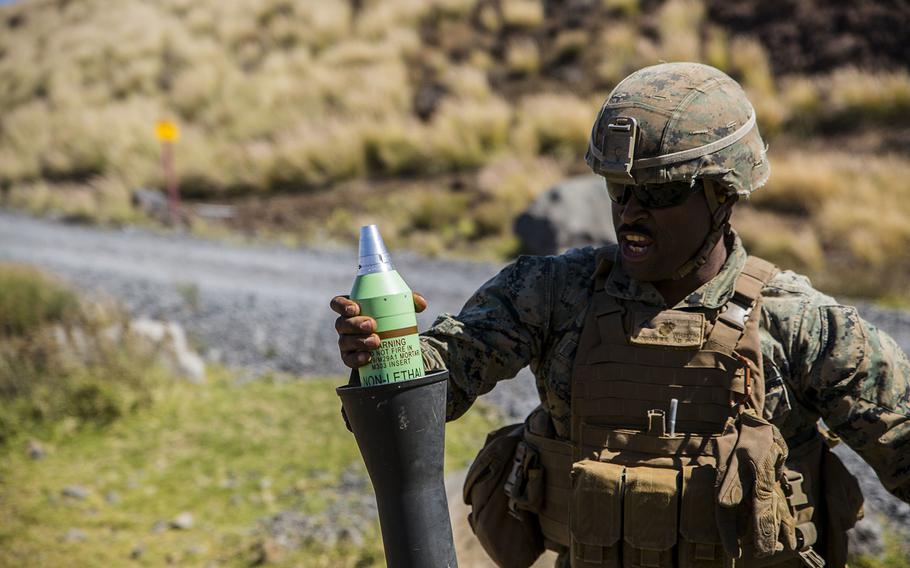 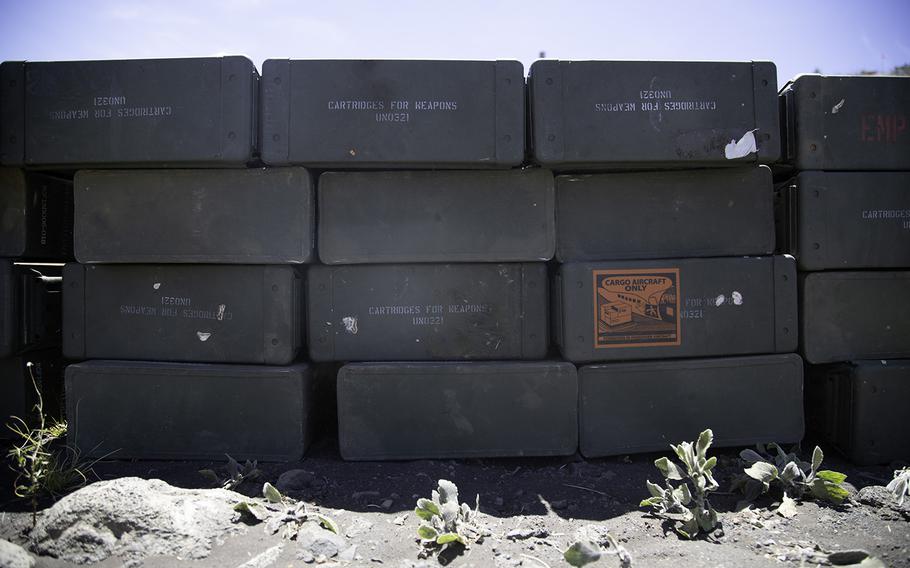 POHAKULOA TRAINING AREA, Hawaii — The Marine Corps field-tested flash-bang mortar rounds designed to suppress the enemy and save civilian lives during the Rim of the Pacific exercise in Hawaii.

Twenty-five nations, more than 45 surface ships and submarines, 17 national land forces, more than 200 aircraft and 25,000 personnel are involved in the drills, which are scheduled to run through Aug. 2 in Hawaii and Southern California.

The Marines fired 56 flash-bang mortar rounds at Pohakuloa Training Area on Hawaii’s Big Island during the field test Monday. It was the first field test for the 81mm munitions, developed by the Joint Non-Lethal Weapons Program at Quantico, Va.

A standard mortar round is designed to strike and destroy a target; however, the new, nonlethal round can be timed to airburst overhead and release 14 flashbangs that descend with the aid of a ribbon attached to their tail. Parachutes attached to the metal shell prevent harm when they land.

The round, which took six years to develop, fills a capability gap, said Nathan Rush, a munitions capabilities integration officer who was on hand for the field test.

“The munition has reached a point where we felt comfortable integrating it into an exercise to get the operational feedback that we need from the Marines,” he said.

Marines from 1st Battalion, 3rd Marine Regiment, who “hung” the first rounds at a makeshift shack at a range of a few thousand yards, were initially skeptical about the new munitions.

“The first thing that went through my head was ‘why?’” said Sgt. Joshua Jackson, 60mm mortar section lead with Company A. “We’re in the business of killing; we’re here to destroy things.”

The mortarmen quickly found a rhythm and launched two days’ worth of the flash-bang rounds in an hour of testing.

Soon he and Cpl. William Ferris, the unit’s fire direction center chief, were coming up with uses for the round.

Jackson said they could distract defenders of a strongpoint. “They’ll be disoriented … and while their heads are hunkered down making sense of what happened we can assault,” he said.

Enemies using human shields or near sensitive items might also be targets, he said.

Flash-bang rounds have potential for operations in the dark, Ferris added.

“It would be much more effective at night … once that flash goes off you’re going to be night blind,” said the Lamar, Colo., native.

“We’re not reinventing the wheel,” said devices technical lead Michael Markowitch, 34, of Rockaway, N.J. He described the new munition as an illumination round with its guts ripped out and filled with flash bangs.

The round can suppress an area covering 24 to 30 square yards, although effects can differ based on a shot’s trajectory, he said.

The Marines found a few issues that will need to be addressed.

About one in 10 rounds fired didn’t detonate properly, rounds wobbled on the way out of mortar tubes and it looked like the parachutes could use refinement, the Marines said.

However, the mortarmen were happy with the new munition rating them at a B average.

Rush noted that the rounds are still in the development phase and that the testing is aimed at fault finding.

“[The round] is still in development; it’s not the final product,” he said

There will be another six months of field testing and two years of qualifications before the rounds can be mass produced by 2021, Rush said.