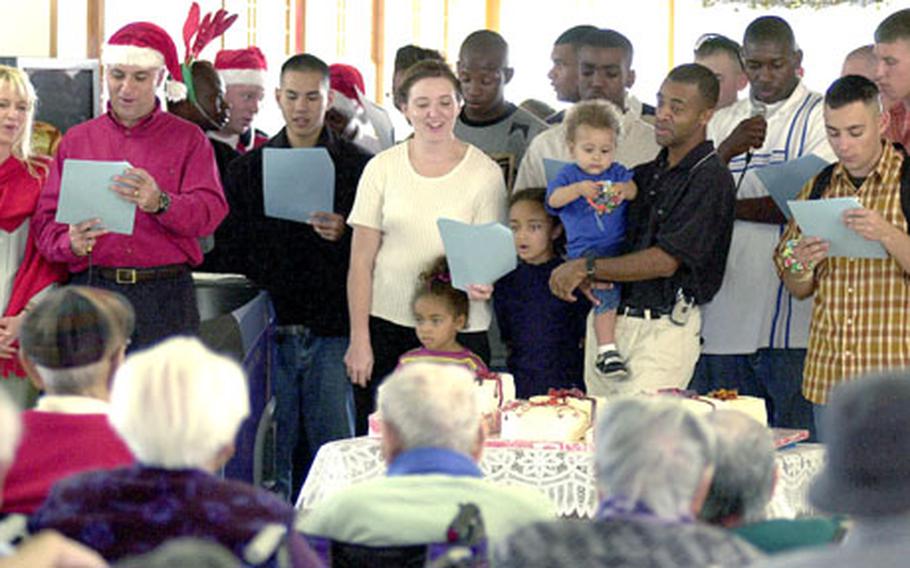 The group from Camp Hansen sings Christmas carols for the nursing home residents. Marines from the 7th Communications Battalion have been volunteering at the home twice each month for the past 13 years. (Fred Zimmerman / S&S)

The group from Camp Hansen sings Christmas carols for the nursing home residents. Marines from the 7th Communications Battalion have been volunteering at the home twice each month for the past 13 years. (Fred Zimmerman / S&S) 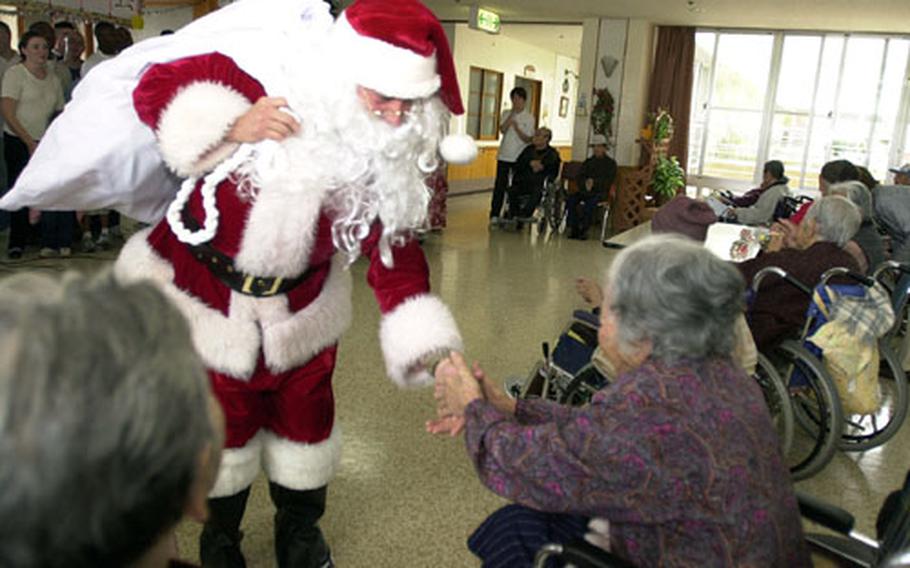 Approximately 30 Marines and family members from nearby Camp Hansen&#8217;s 7th Communication Battalion spent several hours with residents at the Hikarigaoka Nursing Home. The home has 70 residents ranging in ages from 85 to 104, according to Yasunobu Sadoyama, the facility&#8217;s general manager.

After eating a buffet lunch provided by the nursing home, the visiting group sang Christmas carols for the audience. Many of the residents clapped or tapped provided Christmas bells along with the singing. The carolers were given musical support by the III Marine Expeditionary Force Band&#8217;s brass quintet, which also played Christmas music during lunch.

The visit by the servicemembers was eagerly anticipated, Sadoyama said.

&#8220;For most of the residents who are in wheelchairs, it is not easy for them to go out and join in events in the community,&#8221; he said. &#8220;This is one of their rare opportunities to interact with people from outside the facility.&#8221;

Toshi Shingaki, a nurse at the facility, said residents went all out for the visit.

Motoyoshi Matsukawa, 97, was among those who enjoyed the event. He sat in the first row to listen to the Christmas songs.

After a few songs, Santa Claus made a special appearance, handing out gifts to residents while the caroling continued.

Seeing Marines at the nursing home is not rare. Troops from 7th Communication Battalion travel to the home twice each month to perform maintenance on the grounds there. They&#8217;ve been volunteering there for 13 years, according to Lt. Col. Gregory Breazile, the unit&#8217;s commanding officer.

For Lance Cpl. Antwon Jones, a 20-year-old multichannel radio operator, visiting the nursing home is helping his spirits during the holiday season.

&#8220;Even though my family is not here, I&#8217;m substituting these people as my family to help bring my spirits up,&#8221; said Jones, who is spending his first Christmas on Okinawa.

Fellow radio operator and Lance Cpl. Antron Jarrell, also 20, said he was happy to share some of his culture with the residents and visit those often forgotten.