Petty Officer 3rd Class Giang Pham from Beachmaster Unit 2 carries a girl to a U.S. Navy landing craft that will shuttle her and other evacuees to a ship bound for Cyprus. (Ben Murray / S&S)

Petty Officer 3rd Class Giang Pham from Beachmaster Unit 2 carries a girl to a U.S. Navy landing craft that will shuttle her and other evacuees to a ship bound for Cyprus. (Ben Murray / S&S) Evacuees from Beirut board a U.S. Marine helicopter Friday at the U.S. Embassy. (Ben Murray / S&S) 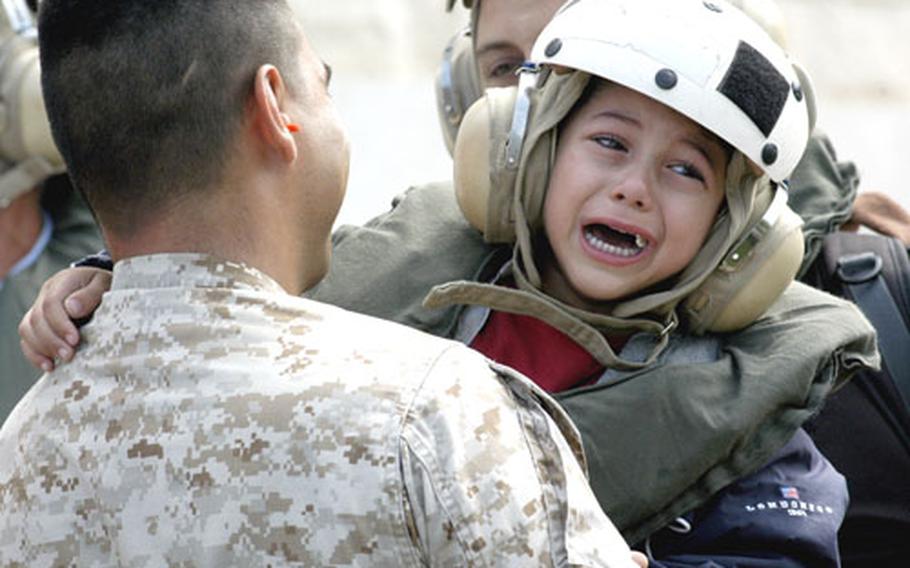 Evacuees wait at a shorefront processing area in Beirut on Friday, where U.S. Navy sailors helped load them onto landing craft to ships bound for Cyprus. (Ben Murray / S&S) 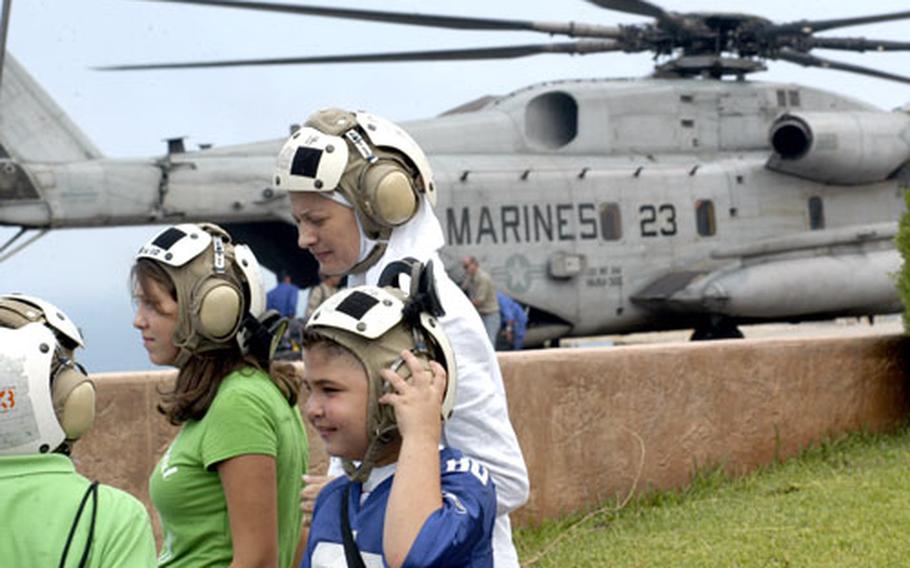 Evacuees from Beirut, Lebanon, wait to board a U.S. Marine helicopter Friday at the U.S. Embassy. (Ben Murray / S&S)

BEIRUT, Lebanon &#8212; The U.S. military&#8217;s effort to evacuate thousands of Americans from war-torn Lebanon moved into high gear Friday as helicopters, warships and landing craft ferried thousands of people away from Beirut.

About 4,000 U.S. citizens were expected to be pulled out of the country Friday in a joint military effort that the commanding general of the combined force said was bigger and more complex than any in decades.

The Saudi commercial ship Rahmah was expected to leave Lebanon on Friday with about 1,400 U.S. citizens bound for Turkey, where the Americans will be taken to Incirlik Air Base, officials said.

It is not yet known how many Americans ultimately will be evacuated to Turkey, said State Department spokesman Justin Higgins.

Among the recent evacuees were also 347 Americans driven by bus out of southern Lebanon on Thursday, said Brig. Gen. Carl Jensen, commander of Task Force 59.

He said most of the military&#8217;s machines for hauling people off the Lebanon coast were operating at full potential.

On the grounds of the U.S. Embassy in Beirut, helicopter evacuations in Marine CH-53 Sea Stallions and Air Force MH-53 Pave Low helicopters continued Friday, hauling people out to ships waiting in the harbor. About 30 people were taken on each flight.

Marines from the 1st Battalion, 8th Marine Regiment from Camp Lejeune, N.C., have been on hand to help about 200 people per day leave the embassy by air, said Capt. Pablo Cabrera, from the 1-8 Marines.

The military&#8217;s endeavor to evacuate people from the beaches in front of the capital using landing craft blossomed as well on Friday, after Thursday&#8217;s initial effort.

Marines on the shore had almost doubled their ability to process and load passengers at the beachfront, and in just a few hours had managed to load about 1,500 people onto the USS Trenton, said Cpl. Carlos Chavesta, who was working at the beach.

People were evacuated by Landing Craft Utility boats in groups of about 350 at a time from the shorefront processing area, where hundreds of families waited to board the ship Friday.

With the arrival of the Trenton and several other Navy craft rigged for evacuation, including the USS Nashville, which made the initial LCU runs Thursday, the military evacuation machine had essentially reached full steam, said Deputy Chief of Mission Christopher Murray.

With the airlifts and landing craft runs going full-time, the U.S. was able to bring in as many people as the transit ports in Cyprus could handle, Murray said.

With the strain from the ever-increasing numbers of evacuees flooding into Cyprus, State Department officials have been working to open a second port of transit, Jensen said.

Servicemembers involved in the process said they have kept motivated over long shifts by the ability to help people in trouble.

&#8220;We love it, to be honest,&#8221; said Petty Officer 3rd Class Tasha May Stevenson, a hospital corpsman, who was working at the Beirut beachfront.

Stevenson and others said it was exciting to be working in a real-world situation they train for, but rarely get to see.

Many said they never thought they&#8217;d be in Lebanon, helping Americans.

And most under their charge were in sore need of assistance. Many have been waiting days in Beirut for a berth on a helicopter or boat going to Cyprus and eventually back home, including whole families with infants.

Once they get a coveted spot, however, they have to wait hours in long lines to get their passports checked and cleared.

But for all the miscommunications and frustration working with the embassy on getting a lift out of Lebanon, most evacuees said the military members were gracious and helpful.

Murray said there was no firm estimate for the total number of citizens the U.S. would pull out of the country, but several thousand more were expected.

Regardless, Jensen said, the military would stay until anyone &#8220;who desires to leave Lebanon has left Lebanon.&#8221;