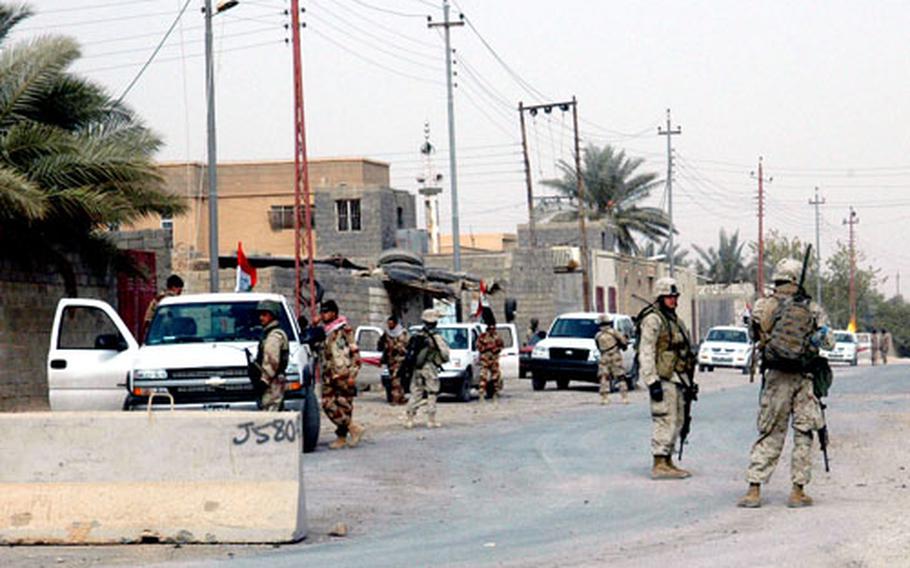 Nevertheless, the man, who heads a local paramilitary group, continues to ride around this dusty border town with a cohort of armed men and several pickups laden with heavy artillery.

&#8220;We are carrying weapons for our own protection,&#8221; Abu Ali, a 39-year-old father of seven and former Army officer under Saddam Hussein, explained to the Marines at a recent meeting.

Disarming the militia, a tribal-based group known as the Katab Al Hamsa, has become a priority for the Marines who swept through this former insurgent stronghold last week and are working to create a long-term presence here to stabilize the region.

&#8220;We will not allow a militia to operate in this area. If you are not a part of the Iraqi army or the U.S. Marines, you will not be allowed on the streets with weapons,&#8221; Lt. Col. Dale Alford, commander of 3rd Battalion, 6th Marine Regiment, told Abu Ali and others at a recent meeting.

The Marines were pleased that Abu Ali showed up at a meeting of community leaders Sunday unarmed and wearing civilian clothes. But they were disappointed to see he brought an entourage of uniformed soldiers and armed vehicles that parked outside the meeting and waited just beyond the U.S. base&#8217;s concrete barriers.

The Marines have heard reports that the militia is threatening, assaulting or even killing local residents from a rival tribe.

Yet the militia has been an U.S. ally in the broader war against insurgents, and the Marines here are treading cautiously as they seek to disarm them.

Here in the far-flung desert towns of the western Euphrates River valley, the larger war against insurgents is entangled with a complex and age-old rivalry between local Sunni tribes.

Abu Ali&#8217;s militia is essentially drawn from the Abu Mahals, a local tribe locked in a bitter and bloody feud with their longtime rivals, the prominent Salamani tribe.

The insurgents who controlled the city for the past year aligned themselves with the Salamanis.

The U.S. forces, on the other hand, recently began training and equipping fighters from the Abu Mahal militia. This tribal force of about 100 men fought with the Marines and the Iraqi army units that pushed through the city last week.

The force, dubbed the Desert Protectors, may help patrol the Syrian border in the coming months, but its precise role remains unclear, Marines said.

For now, the Marines are urging Abu Ali and others from his militia not to seek out and raid homes of suspected insurgents. Instead, they want the militia to pass on any information to the Iraqi army commander.

The militia, estimated at about 400 men, is remarkably well armed and carries new equipment traditionally associated with old Soviet Special Forces units. They have new uniforms, as well as Kalishnikov rifles, PKC guns in their pickups, rocket-propelled grenades, and other weapons that Abu Ali said were &#8220;secret.&#8221;

The militia was kicked out of the city several months ago by an alliance of their rival tribe and insurgents. The city&#8217;s other prominent tribe, the Salamanis, fears that the group will seek revenge in the coming weeks.

Convincing the militia members to set down their weapons before they feel completely secure will be difficult, said Capt. Will Maxcy, who works with the military transition team in the Husaybah area.

The delicate negotiations with the local militia is just one step in the broader transition from a tribal-based society to one run by a government and founded on the rule of law, said Maj. Ed Rueda, who works with the civil military affairs unit here.

&#8220;Once they realize that the monopoly of violence is reserved for the state, they&#8217;ll be fine. But for right now, that is completely foreign to them,&#8221; Rueda said.