Marines do fast trade in MREs, knives and dip for Ukrainian goods at Sea Breeze exercise 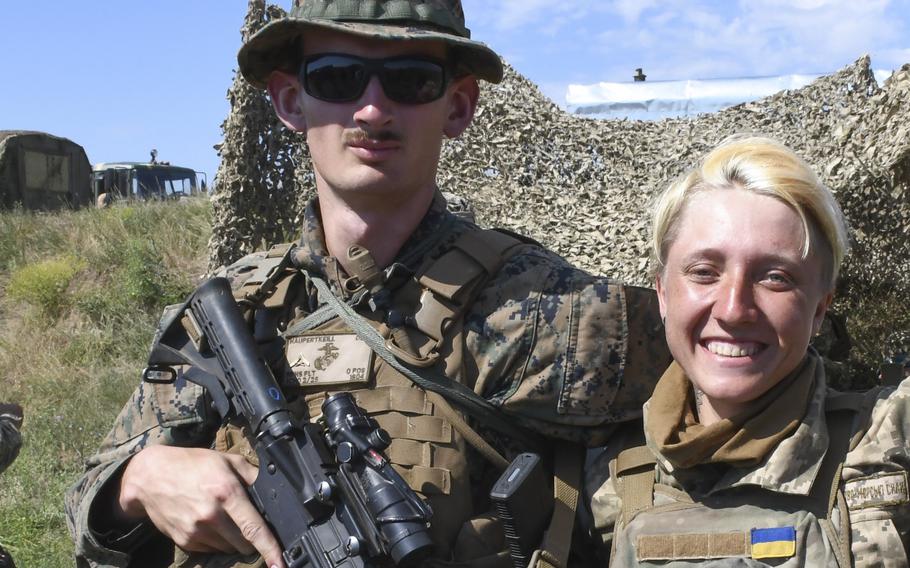 Buy Photo
Pictured here while preparing for a company attack as part of Exercise Sea Breeze on Saturday, July 14, 2018, from left to right are Lance Cpl. Robert Haupertkeill and Pvt. Kristina Nikkolaeva. Nikolaeva and Hapuertkeill had exchanged some gear earlier in the week in a sign of friendship and Nikolaeva had promised to present her U.S. counterpart with an aquamarine beret when the exercise ended. (Chad Garland/Stars and Stripes)

Buy Photo
Pictured here while preparing for a company attack as part of Exercise Sea Breeze on Saturday, July 14, 2018, from left to right are Lance Cpl. Robert Haupertkeill and Pvt. Kristina Nikkolaeva. Nikolaeva and Hapuertkeill had exchanged some gear earlier in the week in a sign of friendship and Nikolaeva had promised to present her U.S. counterpart with an aquamarine beret when the exercise ended. (Chad Garland/Stars and Stripes) 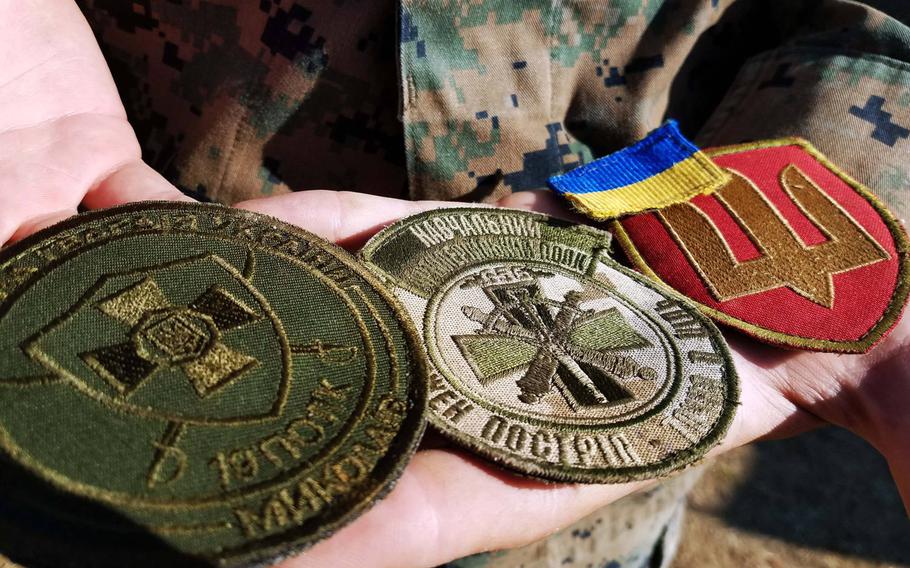 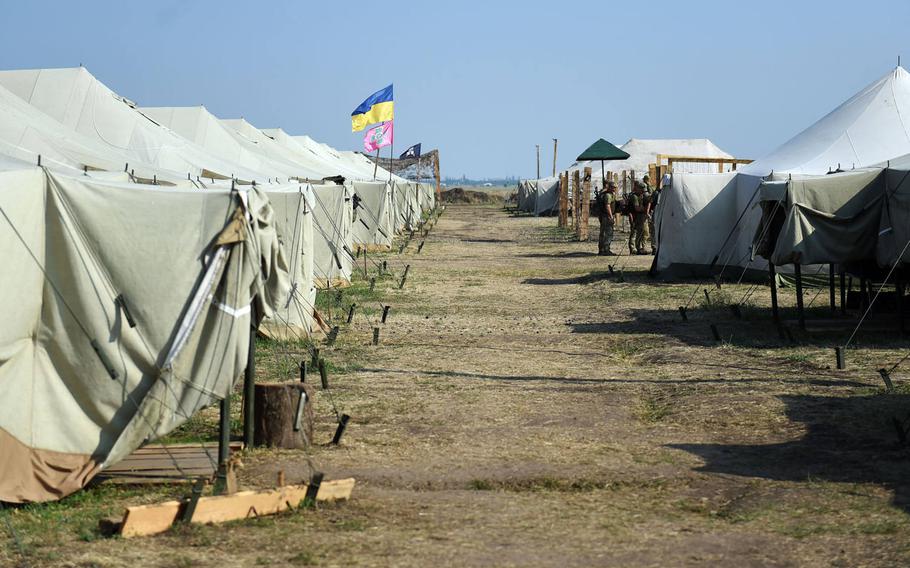 Buy Photo
The camp where U.S. Marines and Ukrainian troops are sleeping during exercise Sea Breeze in Ukraine, Wednesday, July 11, 2018. After hours, the servicemembers from each nation turn the area between these tents into a bazaar, where they barter souvenirs and snacks from each other. (Martin Egnash/Stars and Stripes) 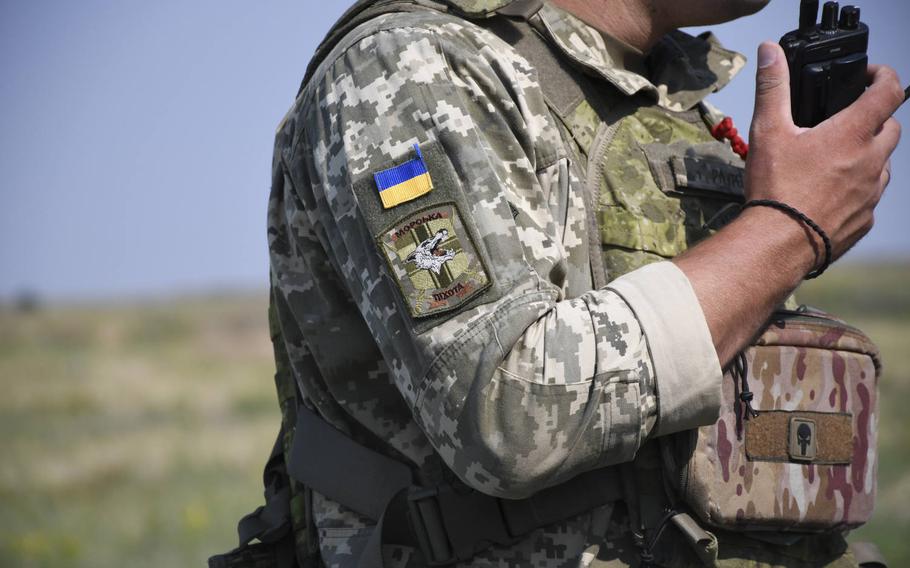 Buy Photo
Patches of a Ukrainian flag, a marine corps symbol and a ''Punisher'' skull are pictured here on the uniform of a Ukrainian marine officer participating in exercise Sea Breeze at a base outside the Ukrainian city of Mykolaiv on Thursday, July 12, 2018. U.S. Marines said they were trading their own uniform items and food from their Meals, Ready to Eat in exchange for such patches and other souvenirs. (Chad Garland/Stars and Stripes) 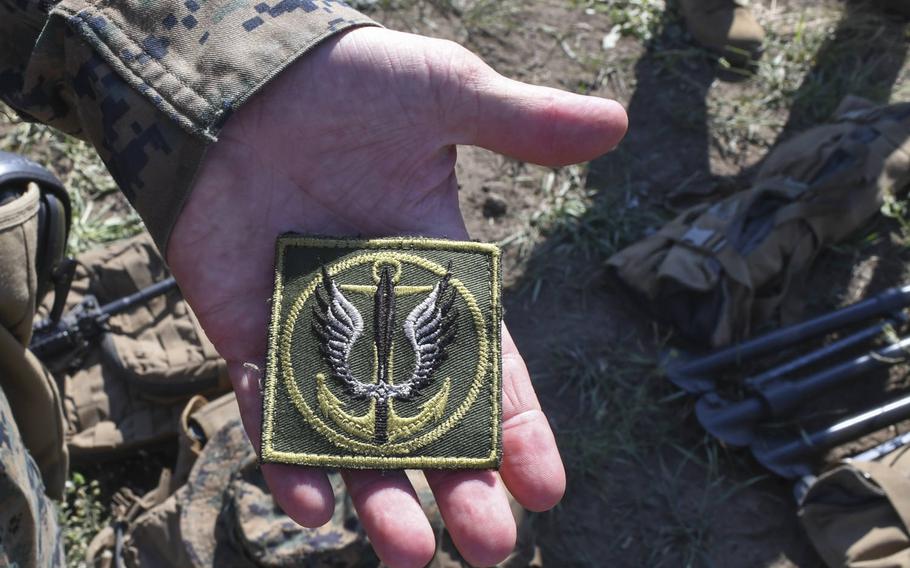 Buy Photo
Pictured here at an assembly area where U.S. Marines and their Ukrainian counterparts were set to mount a company attack on Saturday, July 14, 2018, Sgt. Chad Sparks of Hanover, Pa., displays a patch with the insignia of the Ukrainian naval infantry that he traded with Ukrainian counterparts for during the large-scale Sea Breeze exercise. (Chad Garland/Stars and Stripes) 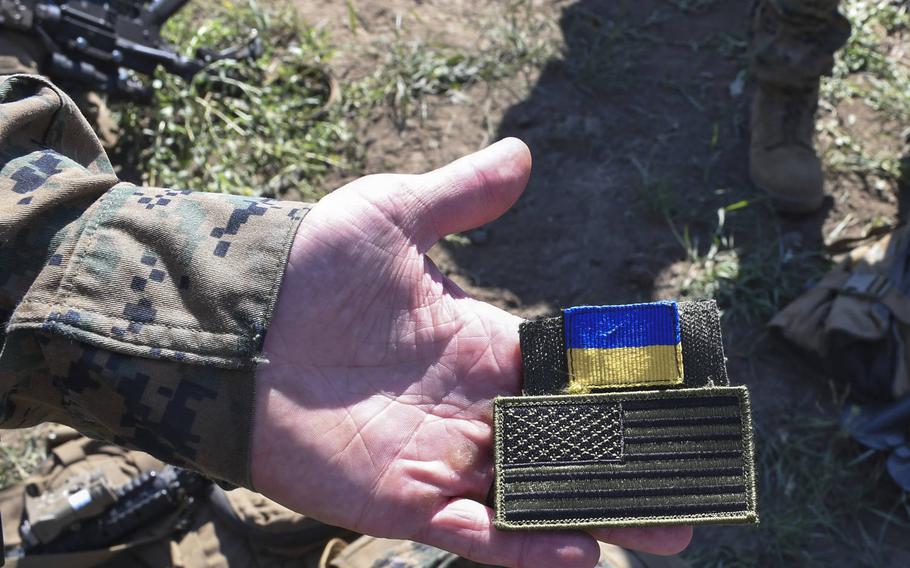 Buy Photo
Sgt. Chad Sparks of Hanover, Penn., is pictured here at an assembly area where U.S. and Ukrainian marines were set to mount a company attack on Saturday, July 14, 2018, displaying a Ukrainian flag patch that he traded with one of his Ukrainian naval infantry counterparts for during the large-scale Exercise Sea Breeze. Sparks said he might trade the U.S. flag patch for another souvenir of the training exercise. (Chad Garland/Stars and Stripes) 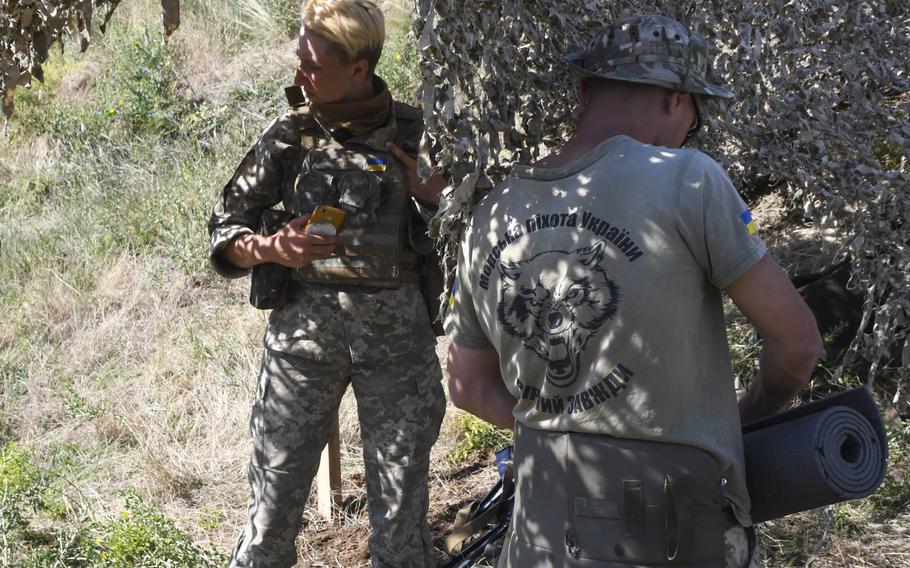 Buy Photo
A Ukrainian marine displays a T-shirt with the motto of his country's naval infantry — "Always Faithful" — printed under a growling wolf's head, while staging for a company attack near a range on a military base outside the city of Mykolaiv, Ukraine, on Saturday, July 14, 2018. (Chad Garland/Stars and Stripes)

MYKOLAIV REGION, Ukraine — Under normal Marine field conditions, scarcity might make Skittles or jalapeno cheese spread from a Meals, Ready to Eat pouch worth trading. But on a base outside Mykolaiv, where Marines trained with their Ukrainian marine counterparts as part of the 19-nation Sea Breeze naval exercise this month, the American staples can net more unusual goods.

The exchange is one of the little things that helps forge closer ties to the troops of the former Soviet republic, where officials hope to bring the military up to NATO standards in Ukraine’s bid to join the defensive alliance.

For example, American traded snacks for a local variety of caffeinated beverage known as Non Stop, which offers a distinctive jolt, the Marines said.

It comes in original, jungle (strawberry) and urban (raspberry-acai) flavors. It costs the equivalent of about 70 cents out in town, but most of the Americans have had little access to local markets while they’ve been living on a large, grassy base in the middle of nowhere, sleeping in rows of tents a stone’s throw from their Ukrainian counterparts since early July.

It’s in this tent village, where the Marines of Echo Company, 2nd Battalion, 25th Marine Regiment have taken to naming the stray dogs that slip through the concertina wire barriers, that trading has taken place after long days of training together on nearby ranges.

Monetary value isn’t always the chief concern, and some members of the Harrisburg, Pa.-based platoon said the trades may be made for sentimental value or camaraderie.

A native of South Canaan, Pa., Haupertkeill traded U.S. patches and a spare grenade pouch, among other things, for a Ukrainian magazine pouch, uniform patches and two of the distinctive blue-striped undershirts known as tilnyky that Ukrainian naval troops wear.

He also got Soviet-era jump wings and a uniform badge as mementos with nothing expected in return.

The exchanges are a “friendly push to build relations,” said Pvt. Kristina Nikolaeva, a Ukrainian machine gunner who traded with Haupertkeill and promised to give him her aquamarine beret — his second such acquisition — at the close of the exercise.

“This is a symbol of the Ukrainian marines, and it’s difficult to earn this beret,” she said.

To earn it, a marine must run a nearly 10-mile obstacle course, she said, but just to get permission to run the course takes six months. She boasted of a few presents from the U.S. Marines: pairs of rank insignia and socks.

Haupertkeill said the new socks were from him. Though he’d earned a reputation for trading anything, the machine gunner said he wouldn’t dare part with his Ka-Bar, a gift from another U.S. Marine. Ukrainians traditionally don’t give knives as gifts — they believe they will sour relationships — but they will trade for them. He’d swapped a little-used spare blade for a Ukrainian one last week.

Most of the trades were made in an area between the U.S. and Ukrainian tents, which some U.S. troops were calling “the bazaar.”

A coveted item for the Ukrainians, as for the Americans, was chewing tobacco, which at the “Sea Breeze bazaar” could be had for energy drinks or flavored Ukrainian cigarettes.

“The Ukrainians love chewing tobacco, and they know we have it,” said Cpl. Zach Robbin, an American infantryman whose trades got him several Ukrainian military patches. “They recognize the brands we have, but it’s hard for them to get those.”

Some Ukrainian troops cleverly feigned ignorance and asked to try some dip first, then deftly scooped lipfuls out of the proffered tins, the Americans said.

Sometimes things of little value to an American might be prized by their Ukrainian counterparts. Pfc. Joshua Smith, a machine gunner with the American platoon, traded a reflective belt for a Ukrainian canteen, a deal he jokingly attributed to “my infinite charisma.”

Many trades are made with little or no verbal communication between the parties, who seldom speak each other’s languages.

“To get the best deal, you should get an interpreter to come explain what the patch says,” said Lance Cpl. Wade Vanvalkenburgh, an intelligence specialist with the U.S. Marines.

The Ukrainian naval infantry insignia — a sword and wings over a golden anchor on a green field — was commonplace. Sgt. Chad Sparks, a machine gunner, said he wanted a rarer red version that he was told was something like a combat action badge.

Moments later, a Ukrainian marine took off an outer shirt to reveal a T-shirt printed with an image of a wolf’s head and the Ukrainian naval infantry’s motto: “Always faithful.”

The U.S. Marines, whose motto is the same but in Latin rather than Ukrainian, admired the shirt and began plotting a future trade.