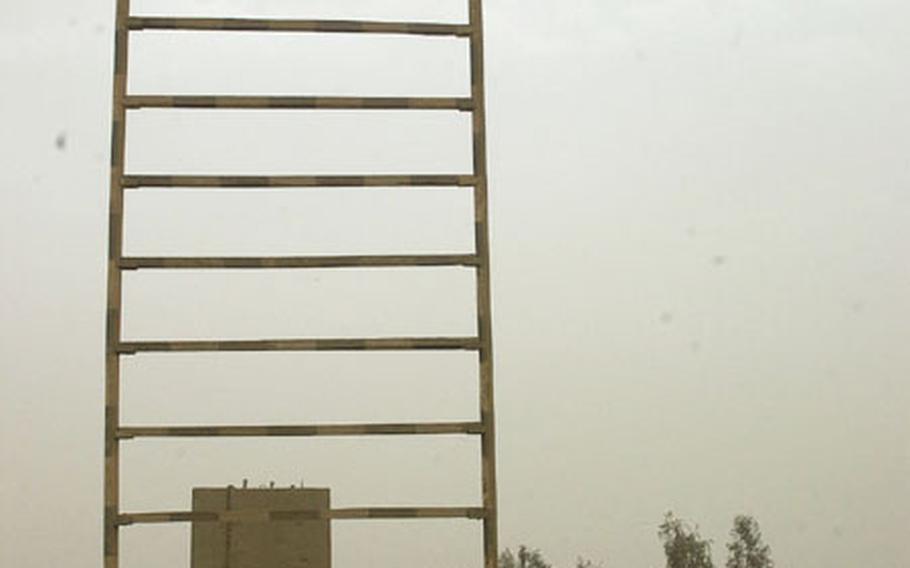 Marines form 2nd Battalion, 23rd Marine Regiment tour the obstacle course in the center of a training camp on the east side of Baghdad, believed to be used to train terrorists in the Palestine Liberation Front. (Mark Oliva / S&S)

Marines form 2nd Battalion, 23rd Marine Regiment tour the obstacle course in the center of a training camp on the east side of Baghdad, believed to be used to train terrorists in the Palestine Liberation Front. (Mark Oliva / S&S)

Literature bearing the logo of the Palestine Liberation Front was among the evidence recovered by Marines from a suspected terrorist training camp on the eastern side of Baghdad. (Mark Oliva / S&S)

Flags of the Palestine Liberation Front and Iraq were painted side-by-side on the gate of a small camp near Iraq&#8217;s capital city. Another painting of a masked terrorist brandishing an AK-47 stood watch nearby.

Marines from 2nd Battalion, 23rd Marines discovered the camp last week east of Baghdad. The facility, hidden behind 6-foot dirt berms, was stacked with the evidence the U.S. government long had claimed existed in Iraq.

&#8220;We believe this is a training camp where Iraqis trained forces for the Palestine Liberation Front,&#8221; said Capt. Aaron Robertson, a Marine intelligence officer for the battalion. &#8220;This is what we would refer to as a sensitive site. This is a clearly a terrorist training camp, the type Iraq claimed did not exist.&#8221;

The camp itself is roughly 10 miles outside of Baghdad, hidden in a cluster of trees in the midst of wheat fields. The training site is about 10 acres in size. About a dozen reinforced concrete buildings line the front edge with a large parade field, concrete and steel obstacle course and even a shooting range within its confines.

The camp has many modern amenities, including running and heated water, a large kitchen and electricity. Some buildings had ceiling fans and central air conditioning.

&#8220;It&#8217;s much more sophisticated than those training camps we found in Afghanistan,&#8221; Robertson explained. &#8220;It has a permanent obstacle course, which rivals anything our Marines have back at Camp Pendleton.&#8221;

It was not the structure that struck the Marines as the irrefutable evidence, but what they found inside.

Flags of the Palestine Liberation Front decorated walls throughout the compound, including drawings of a complete Palestine, encompassing all of present-day Israel.

Decorations included murals of AK-47s and slogans written in Arabic about Iraq and Palestinian forces uniting to rid Jerusalem of Jewish invaders. Portraits of Abu Abbas, leader of the Palestine Liberation Front and known terrorist, were hung in several rooms.

Still, the evidence wasn&#8217;t all propaganda.

Marines uncovered documents bearing the logo of the Palestine Liberation Front written in both Arabic and English. Rosters and photos of personnel believed to have trained at the site were seized.

One room contained several dark-colored bottles. An officer trained in such matters determined they once contained nitric acid, a key ingredient for making bombs. Next to the bottles were detonators and even an artillery shell with a hollow nose cone.

Training manuals and instructions for everything from former Soviet vehicles to artillery shells were recovered. Hand-drawn instructions on how to employ tanks in formation were found slipped in the back of one portrait.

Evidence recovered by the Marines also indicated the facility was only recently abandoned. One receipt was dated Jan. 4, 2003, listing weapons delivered to &#8220;headquarters,&#8221; but not a supplier. The weapons were delivered to &#8220;serve the flag of the Iraqi cause,&#8221; according to the document.

Maps and terrain models were also uncovered, as well as uniforms with different colors and patterns than those found on Iraqi soldiers. Empty cartons of cigarettes were among the trash left behind, not there long enough to collect dust.

There was also evidence that whoever was in the area left in a hurry. Stocks of military boots were piled on one room and canisters for propane heaters were stacked in another. Toothbrushes and toothpaste were left on shelves and hangers still hung in closets.

The site itself was a surprise.