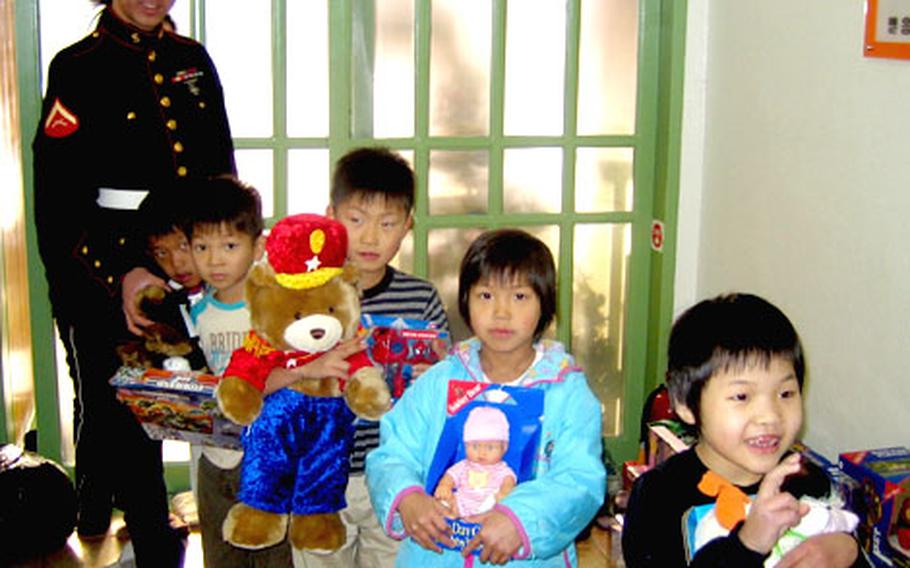 Children at the Cha Shin orphanage in Wonju, South Korea, hold new toys delivered to them on Wednesday by U.S. Marines who drove in from Seoul. (Courtesy of U.S. Marine Corps)

Children at the Cha Shin orphanage in Wonju, South Korea, hold new toys delivered to them on Wednesday by U.S. Marines who drove in from Seoul. (Courtesy of U.S. Marine Corps) 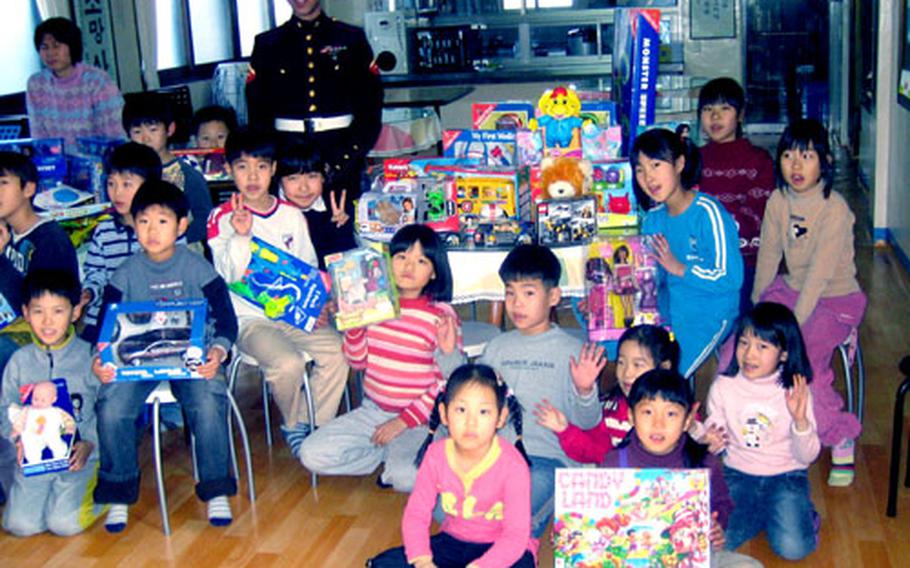 PYEONGTAEK, South Korea &#8212; Marine Lance Cpl. Jacob Friesen remembers how the eyes of little children in a South Korean orphanage lit up last year when U.S. Marines dropped in with a load of Christmas gifts.

So this Christmas season, Friesen lost no time volunteering to help the U.S. Marines in South Korea with a most peaceful of missions: collecting donated toys for peninsula orphanages.

In South Korea, this year&#8217;s effort brought in more than 1,500 toys and about $250 in cash, said Gunnery Sgt. Windle Riles of Marine Forces Korea headquarters in Seoul. He coordinated this season&#8217;s effort, which began Nov. 23.

By Wednesday afternoon, the first vanloads of leathernecks bearing gifts had pulled out of MARFOR-K headquarters for long-distance trips down the snowy peninsula.

In all, toys will go to at least 400 children at no fewer than 10 orphanages in South Korea.

To get the donations, Marines in pairs or threes staffed two collection points &#8212; one at the Four Seasons on Yongsan Garrison in Seoul and inside the shopping mall at Osan Air Base in Pyeongtaek &#8212; with a sign that read &#8220;Support The Marine Corps Reserve Toys For Tots Program&#8221; and one or more barrel-shaped drums to collect the toys.

Marines also set up a drop box near the Yongsan post exchange. &#8220;We checked every day and people could put money in there if they wanted to,&#8221; Riles said

Marines then brought the toys to MARFOR-K headquarters where they were sorted by age and gender.

During the weeks they were collecting toys, MARFOR-K became a cross between its usual all-business headquarters atmosphere and that of a small toy warehouse.

They&#8217;d already delivered some toys to the Army Community Services offices on Yongsan on Dec. 16 in time for an ACS Christmas party, Riles said.

Wednesday, Friesen and several other Marines loaded a van with about 300 toys and the cash donations and embarked on the long drive southeast to Camp Mu Juk. Mu Juk Marines will distribute the toys later to an area orphanage.

Other Marines going to camps in Wonju and Mok&#8217; po had toy-delivery drives of about two-and-a-half and five hours, respectively.

Most of the other orphanages are in or near Seoul.