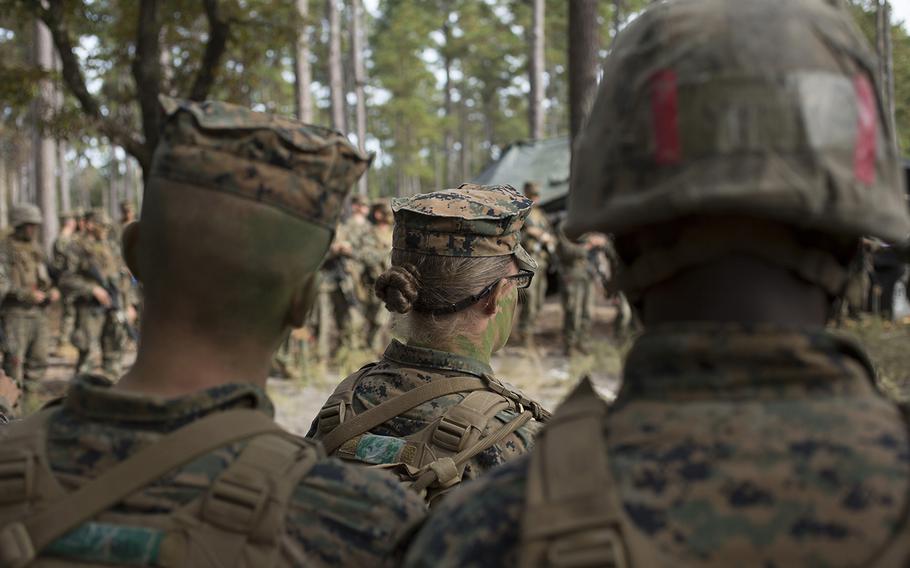 U.S. Marines listen to a combat order brief Nov. 15 before stepping off on a raid, which is part of the Infantry Integrated Field Training Exercise at Camp Geiger, N.C. The Marines Corps has delayed changes to its female pull-up standards after data showed that many potential Marines were unable to meet the new standards. (Paul S. Mancuso/U.S. Marine Corps)

GRAFENWÖHR, Germany — The Marine Corps has delayed changes to its female pull-up standards after data showed that many potential Marines were unable to meet the new standards.

The changes to the annual physical fitness test would have gone into effect Jan. 1, 2014, and would have ensured that all female Marines were able to complete between three and eight pull-ups in order to pass.

However, recent reports show that only 45 percent of female recruits were able to meet the minimum standard at boot camp, compared with a 1 percent failure rate among their male counterparts. In response, Headquarters Marine Corps released a statement last month saying that the proposed changes are now on hold to give units more time to properly train their troops. It’s a change that female leaders within the Corps are planning on putting to good use.

“The issue isn’t one of capability,” said Capt. Laura Perazzola, regional planner for Marine Forces Europe. “But it’s about small unit leadership and ensuring those leaders are getting their Marines up to par.

For 2014 the standard will be a mix of the old and the new, with women being given the choice to do either pull-ups or the traditional flexed-arm hang during their annual fitness tests.

These changes are a reflection of the rapidly expanding role of female Marines in combat-related jobs. These demand a more universal set of standards for all Marines in accordance to the guidance handed down in 2012-2013 by former Defense Secretary Leon Panetta.

This guidance led to the repeal of 1994’s Direct Ground Combat Assignment Restriction that kept women out of certain combat-centric jobs, including infantry and artillery. Across the entire military, this opens up roughly 70,000 jobs that were closed to female troops. So far, it has been the Marine Corps that has taken the early lead on integration.

In November, three women successfully completed Marine infantry training — the first enlisted females in any U.S. service to qualify as infantry troops. Those three were the only ones out of 39 women to complete the course. This low graduation level is indicative of the difficulties in implementing even small changes affecting female Marines

But like everything else these challenges can be turned to positives, said Sgt. Shenetta Moye, a career planner with Marine Forces Europe.

“It’s another tool for us to be physical fit and to keep things more equal,” Moye said. “Nobody wants to be distinguished as either a female Marine or male Marine, we want to all be just Marines.”

Moye has already reached the maximum pull-up goal set forth by the Marine Corps in 2012.

“It’s going to hurt, but you got to put in the work. Just like everything else in your life, if you want to do it you will,” she said.