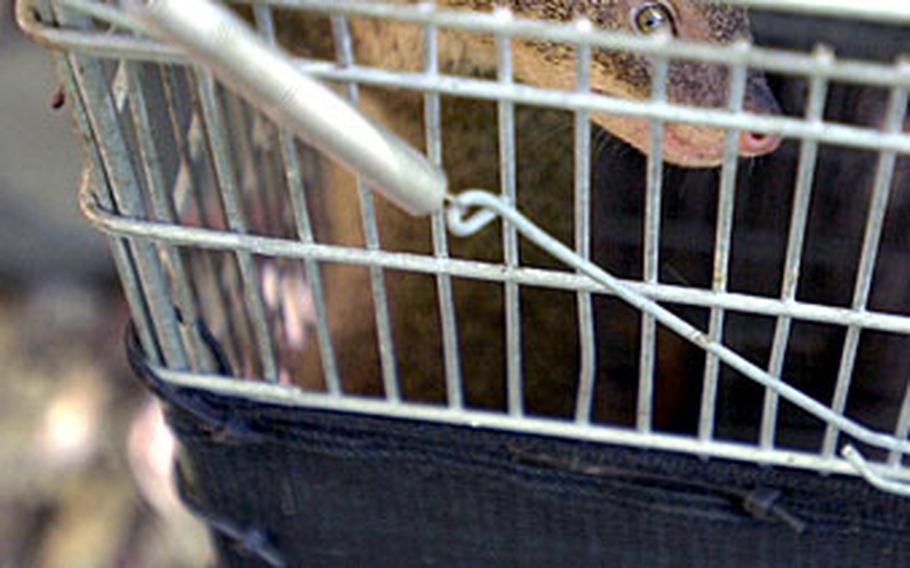 A mongoose sits inside a trap. The Marine Corps Camp Butler Environmental Office began a trapping project June 27, and a mongoose is caught every other day at the Jungle Warfare Training Center. (Cindy Fisher / S&S)

Ongoing research has made increasingly apparent the center also has become home to the nonindigenous mongoose.

So much so that a new trapping effort the Marine Corps launched a few weeks ago has been bagging an average of one mongoose every two days.

Habu snakes are nocturnal and mongooses are active during the day &#8220;so there aren&#8217;t many opportunities for them to encounter each other,&#8221; he said.

Instead of battling snakes, mongooses have been migrating north and going for easier prey: birds, other reptiles and insects such as the 14 endangered species found on the training center.

Threatened species include the Ryukyu long-tailed rat, the Ryukyu robin and the rare Okinawa rail, a bird first discovered in 1981 and found only in northern Okinawa.

In recent years, the Department of Culture and Environmental Affairs, a department of the Okinawa prefectural government, conducted trapping on the training center and have caught mongooses.

The Marine Corps is now lending a hand. On June 27, the Environmental Branch began a six-week trapping effort and set 205 about 5 meters off the center&#8217;s main roads, Sugiyama said.

Japanese were hired to check the traps &#8212; an eight-hour daily effort &#8212; and have been finding about one every other day, said contractor Yasuo Iijima. The critters that are caught are taken to the University of Ryukyus for study.

Sugiyama said more research is needed to determine the extent of the island&#8217;s mongoose population.

Once the Environmental Branch concludes trapping, the Japanese government will begin other trapping projects.