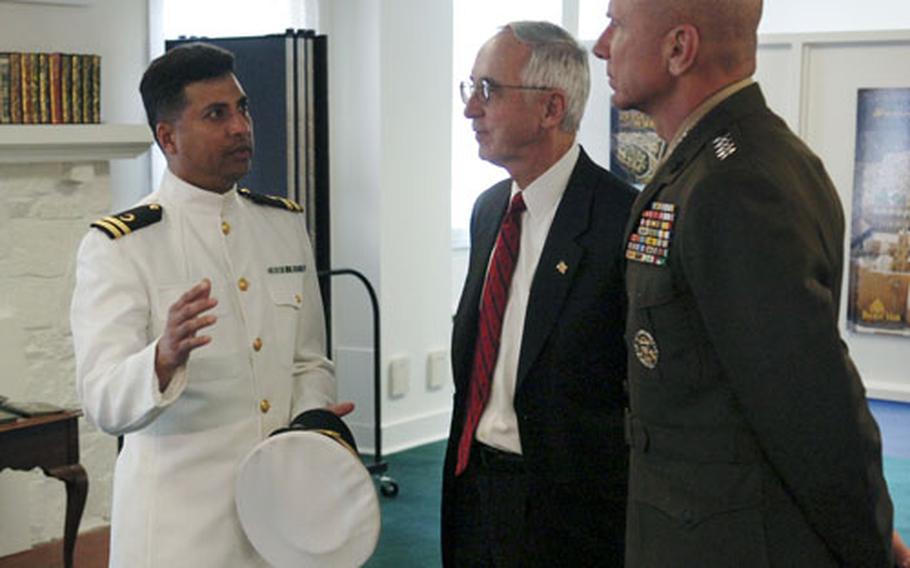 QUANTICO MARINE CORPS BASE, Va. &#8212; Staff Sgt. Maydun Shahid said he was &#8220;happy to see this day&#8221; as the Marine Corps dedicated its first Islamic Prayer Center on Tuesday.

Shahid is one of 426 Muslims serving in the Marine Corps who now have a place to pray at the center, which will be available to Muslims in uniform until a permanent facility is built in 2009, officials said.

At the dedication ceremony, Deputy Defense Secretary Gordon England praised the roughly 4,000 Muslim Americans now serving with the U.S. military, saying Muslims have a long tradition of service going back to World War I.

&#8220;Muslim Americans, like millions of other Americans, have always stepped forward to answer the call when freedom is threatened,&#8221; England said.

He also congratulated the Marine Corps and Chaplain Corps for seeing the need for a prayer center for Muslim Marines.

Freedom of religion is a paramount American value, one that prompted the pilgrims to come to this continent more than 400 years ago, England said.

Marines from all religions serve in the Corps, said Hagee.

After the dedication ceremony, officials declined to talk specifically about allegations of Marine misconduct when quizzed by reporters.

So far, Defense officials have kept mum on ongoing investigations into allegations that Marines killed two dozen Iraqis near Haditha in one incident and another Iraqi man in a separate incident near Hamandiyah.