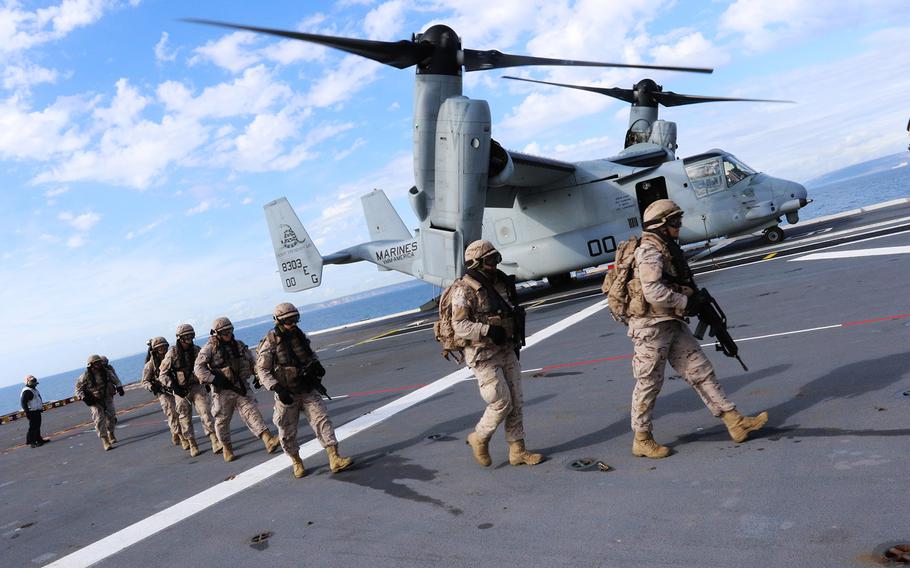 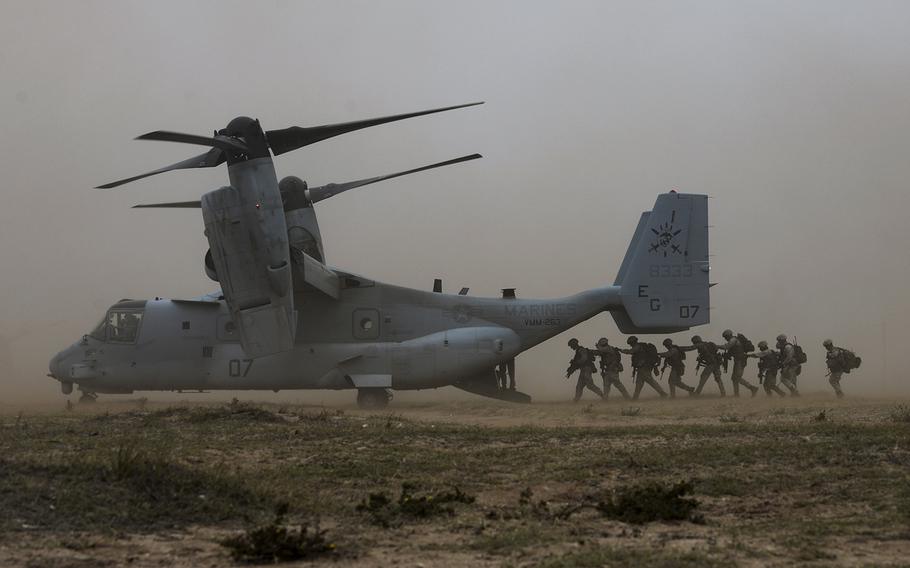 U.S. Marines with the Special-Purpose Marine Air-Ground Task Force Africa load into an V-22 Osprey during a demonstration as part of exercise African Lion 16 at Tifnit, Kingdom of Morocco, April 26, 2016. The crisis response force attached to the SPMAGTF have learned that their fleet of 12 Ospreys will be cut down to six. (Krystal Ardrey/U.S. Air Force)

Back-to-back years of budget cuts are forcing the Marine Corps to slash in half its fleet of crisis response Ospreys in Spain, a move that comes as the force struggles to maintain its overall state of readiness, according to senior Defense Department officials.

Established in 2013 in response to the attack on American diplomats in Benghazi, Libya, the Marine force is tasked with responding quickly to crises in the U.S. Africa Command’s area of responsibility. From its base of operations in Moron, Spain, the unit has responded to a number of emergencies, including a 2014 evacuation of the American Embassy in Libya.

The six aircraft, along with their crews, are to be moved back to the U.S., in part, to provide a better home-to-deployment ratio for the Marines, said Capt. Sarah Burns, Marine Corps spokeswoman.

“In the past 15 years, the time deployed compared to the time at home is 1:2. That means that for every one day deployed, theoretically, a service member is allocated two days back home,” Burns added. “It used to be 1:3. Transferring the six Ospreys from Spain to the U.S. gives Osprey squadrons more time at home and helps the Marine Corps’ overall plan to restore readiness to its aviation.”

Dunford added that while there would be enough air support for the Marines’ mission in AFRICOM, the decision to remove six Ospreys from its arsenal was not taken lightly.

“No, I’m not happy that we had to reduce the number from 12 to six,” Dunford said. “That does reduce the flexibility, it reduces the depth.”

At the moment, the Marines on the ground aren’t overly concerned by the move, said Maj. Richard Ulsh, communications director for U.S. Marine Corps Forces Europe and Africa.

But readiness has long been a concern of the Marines as they continue to see their operation and maintenance funding slashed. Last year, Gen. Robert Neller, commandant of the Marine Corps, addressed the House Appropriations Defense Subcommittee about how that budget shortfall was affecting the Corps’ ability to respond to crisis.

“The fiscal reductions and instability of the past few years have impacted our readiness,” Neller said in a statement to Congress. “As resources have diminished, the Marine Corps has protected the near-term operational readiness of its deployed units in order to meet operational commitments. This has come at a risk.”

Chief among the concerns laid out by Neller in 2016 was the Corps’ inability to meet aviation readiness, both in training and in combat. Some of that lack of readiness is because of an aging fleet of F/A-18 fighter jets.

Neller said the Corps is short 52 of the fighters needed for training and 43 jets short of what’s needed to sustain its warfighting capability, even as it continues to add F-35 Joint Strike Fighters to the fleet. The Marines plan to have more than 400 F-35s added to their air wings by 2031.

The Osprey announcement has caught the attention of some in Congress.﻿ Sen. David Perdue, R-Ga., a member of the Senate Budget and Foreign Relations committees, addressed the Senate on the same day Dunford and Defense Secretary Ash Carter announced the cutback.

“In Moron, Spain, we have a contingent of Marines and one of their missions is to protect our embassies in Africa. Post-Benghazi, that takes on a new level of importance,” Perdue said. “The problem is, because of budget constraints, their fleet of airplanes, the V-22 Ospreys, is getting cut in half and that fundamentally cuts their mission in half.

“They’re not going to be able to fulfill the mission they have today the way that they’re supposed to because of our own intransigence,” he added.