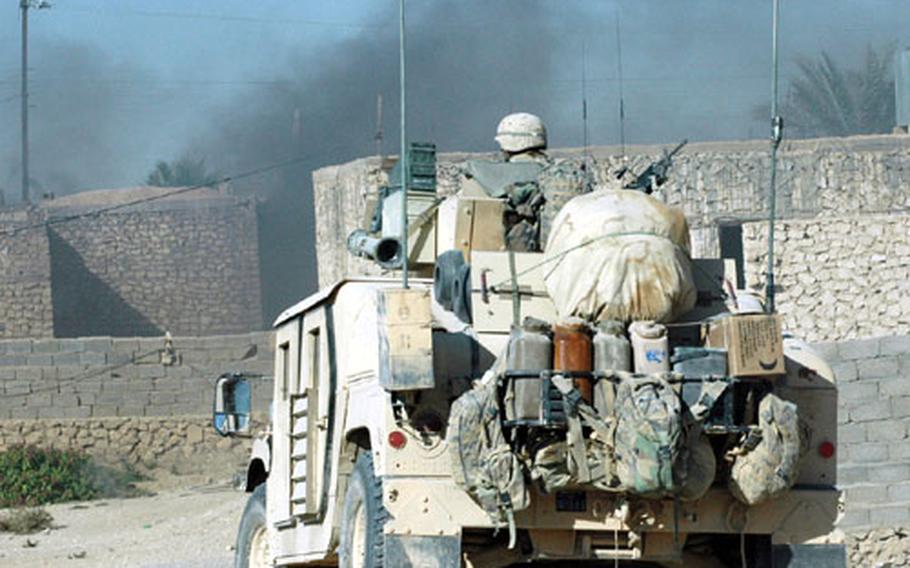 HUSAYBAH, Iraq &#8212; Marines on Thursday marched though garden courtyards, climbed over crumbling stone walls and ducked under clotheslines as they continued their house-by-house search of this Syrian border city and neared the close of one of their largest operations in months.

With chalky cliffs and the Euphrates River valley looming to the north, Marines swept steadily through the city on the sixth day of fighting, as the stiff resistance seen earlier in the week had largely faded away.

A company commander with the 2nd Battalion, 1st Marine Regiment, Parrish was on the move Thursday with his Company F on a block-by-block march toward the city&#8217;s eastern edge.

Explosions and artillery echoed across the city, mostly the result of U.S. Marines breaching locked buildings and the controlled explosions of makeshift bombs left by the enemy.

&#8220;It&#8217;s actually quite a disappointment we didn&#8217;t get any action this time,&#8221; Lance Cpl. Alex Guzman from San Diego, Calif., said near the end of the day Thursday, as he played chess with an Iraqi solider at a temporary outpost.

Guzman and other Marines from his battalion fought in the battle of Fallujah in April 2004 and said this operation was nothing compared to that fight.

But Marines have seen some action. Lance Cpl. Paul Scott, 19, recalled killing a man for the first time during a firefight earlier in the week.

The sweep marks the first time U.S. soldiers have entered Husaybah in more than one year. The city is considered a key transit point for weapons and suicide bombers brought into Iraq from Syria.

While many civilians in the city of roughly 40,000 residents fled before the fighting, many remained. Families cowered in outdoor gardens as Marines marched through their property. Some men and women with children in tow walked through the streets, carrying white flags on sticks as they passed U.S. troops.

About 900 people remained at a camp on the edge of the city, where Marines provided food and shelter to those who chose to leave their homes during the sweep.

Dozens of Marines patrolled along the city&#8217;s main street, peering inside storefronts whose doors were flung open and appeared abandoned. Residents were instructed to leave all homes and stores unlocked to permit troops to search the area.

The first several days of the sweep, Marines saw some sniper fire and found many roadside bombs and booby-trapped homes that appeared hastily set and were easily identifiable.

The drop in enemy fire came as a relief to the several thousand Marines who mounted the campaign, the largest of its kind since the battle in Fallujah in November 2004.

&#8220;I expected us to be grinding through the city, street by street, and taking a lot of casualties,&#8221; said Staff Sgt. Robert Homer of Mankato, Minn.

The Marines, along with a local Iraqi Army battalion, plan to set up a permanent presence in the city to prevent insurgents from returning.

&#8220;This is not a problem you solve; this is an issue you manage,&#8221; said Col. Stephen Davis, commander of Regimental Combat Team 2, which is overseeing the sweep.

As the Marine moved forward, small units took up battle positions in homes and other buildings. Many city buildings were spray painted with the numbers &#8220;2/1&#8221; indicating that troops from the 2nd Battalion, 1st Marine Regiment had occupied the structure.

For years, the border city has benefited from smuggling operations that Saddam Hussein&#8217;s regime struggled unsuccessfully to reign in. Some Marines were stunned at the size of the homes compared to poorer Iraqi cities.

Capt. Brian Gilbertson of Wisconsin was one of many Marines who believed that the enemy fled after seeing the number of troops here and the fierce assault the U.S. forces were prepared to mount.