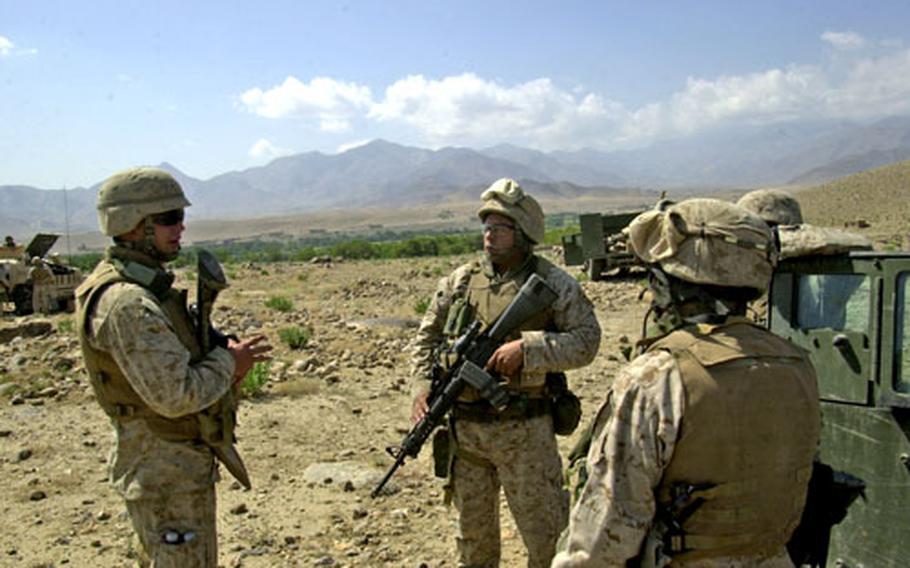 MEHTAR LAM, Afghanistan &#8212; For many of the U.S. servicemembers at bases east of Kabul, election day was spent in relative quiet and isolation inside the wire. They were largely sequestered on bases or patrolling areas away from polling places, in accordance with U.S. plans to keep a low profile during the historic vote.

But election day wasn&#8217;t quiet for everyone. Insurgents fired three rockets at a Marine platoon patrolling near Alishang at approximately 9 a.m. Sunday. The rockets sailed high, missing their intended targets. No Marines were injured in the incident.

Also, Afghan National Army troops were attacked near Alingar. But early reports that a female candidate was shot and killed Sunday near Mehtar Lam turned out to be false.

Overall, U.S. troops here maintained a decidedly low profile on a day when roughly 12 million Afghans nationwide were expected to take to the polls to elect parliament and provincial council leaders.

&#8220;Today is a day for Afghanistan, not the coalition,&#8221; said Navy Cmdr. Frank Gutierrez, commanding officer of the Mehtar Lam provisional reconstruction team.

Afghan police and the Afghan Army provided security in and around polling locations. U.S. forces were kept on their bases as quick reaction forces, if needed to respond to a request for assistance by Afghan forces.

In the Laghman province &#8212; where Mehtar Lam is the capital city &#8212; 210,000 of the 400,000 residents were registered to vote in Sunday&#8217;s election. During the October 2004 presidential election, just 37 percent of the registered voters in the province cast ballots. Rain and pressure not to vote were cited as reasons for the low turnout.

But U.S. officials expected Sunday&#8217;s election to bring 65 percent of registered Laghman province voters to the polls, which would be a healthy turnout even for a U.S. election.

Sixty-five candidates from the Laghman province are seeking four spots on the Afghan National Assembly. Three of those spots will be held by men, and a woman will earn the fourth available position.

Also in the Laghman province, 99 candidates are vying for nine seats on the provincial council. Three of those spots will be filled by women.

Afghans undoubtedly will rely on their newly elected leaders to push for local projects. But such advances will not likely happen overnight.

Gutierrez reinforced that Sunday&#8217;s election was about the Afghan people, and that U.S. troops would only be called on if requested.