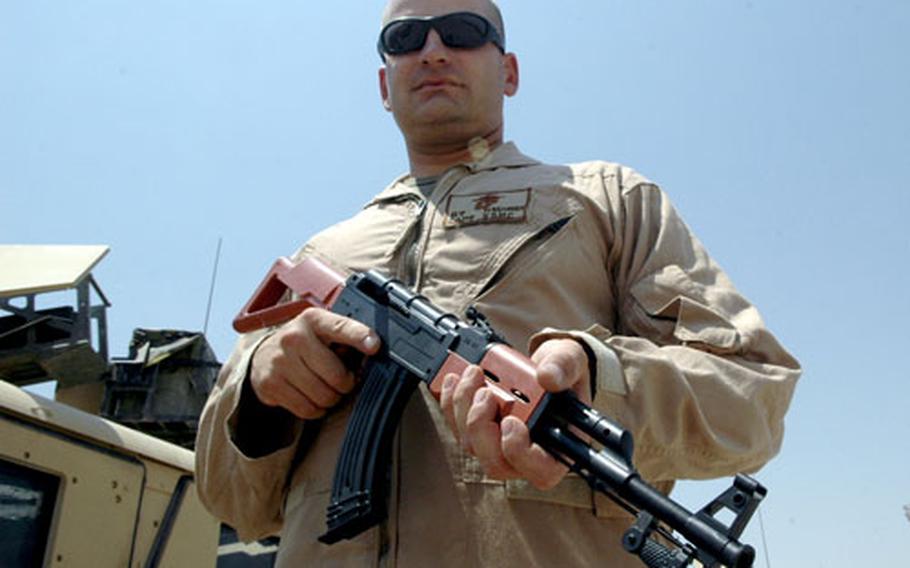 Marines in this one-time insurgent stronghold are hoping to head off tragedy before it occurs by banning the sale of realistic-looking toy guns in this city&#8217;s bustling souk.

The plastic pellet guns are modeled after 9-millimeter pistols, shotguns and AK-47s. In some instances, the toys are one-to-one scale replicas of real weapons. Commanders in the 1st Battalion, 25th Marine Regiment, &#8220;New England&#8217;s Own,&#8221; say the toys are too easily mistaken for real guns and could draw fire from Marines.

The plastic gats began turning up in markets more than a month ago, and already there have been instances where children waving the toys have attracted the attention of Marines.

Since Fallujah was recaptured from insurgents more than a year ago, possession of all firearms here has been outlawed. While families in the rest of Iraq are permitted to own one Kalashnikov assault rifle per family, carrying a pistol or rifle in Fallujah carries serious consequences.

The 1-25&#8217;s Weapons Company has been particularly aggressive in looking for weapons in vehicles and hiding spots like public parks, as their first combat death was due to small-arms fire.

The 1-25, a reserve infantry unit headquartered at Devens Reserve Forces Training Area in Massachusetts, falls under the command of Regimental Combat Team 5.

Maj. Craig Abele, Weapons Company commander, said he was shocked to see a small child running across the street recently with what looked like a 9 mm pistol. He grabbed the weapon and discovered it was a toy. &#8220;It looked just like the real thing,&#8221; said the 35-year-old Falls Church, Va., native.

On Sunday, Hasheider confiscated several of the toys while patrolling the city. He said that store owners have been cooperative after he&#8217;s explained why they are being banned. The toys sell for $2 a pop.

Currently, when Marines find a child with a toy gun, they take it away and replace it with a soccer ball or other item, he said.

Previous Marine units in Fallujah have accused insurgents of giving toy guns to children on purpose, in the hope that they will be shot by U.S. troops and turn public sentiment against the coalition.

Whether or not this is the case, Hasheider said he&#8217;s still perplexed by parents who would allow their children to carry toy guns in such an environment in the first place.