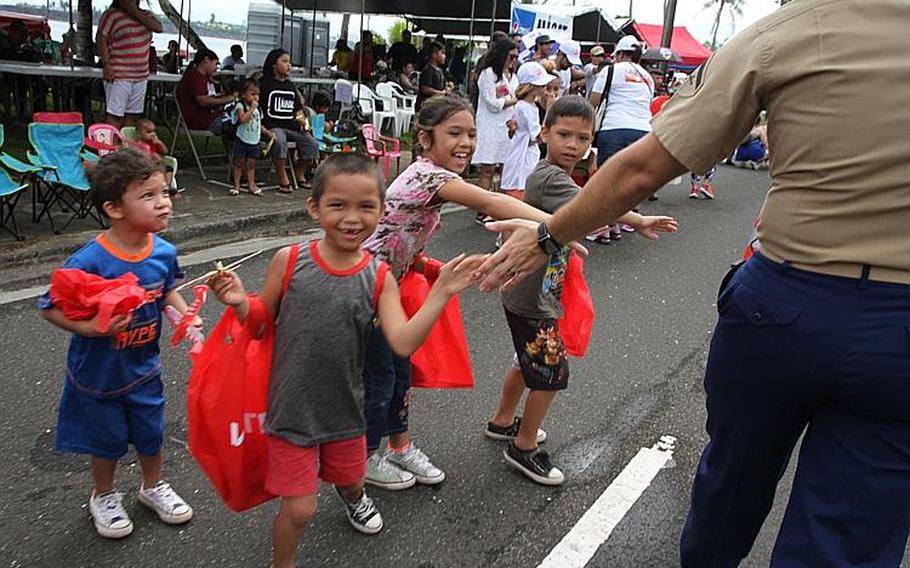 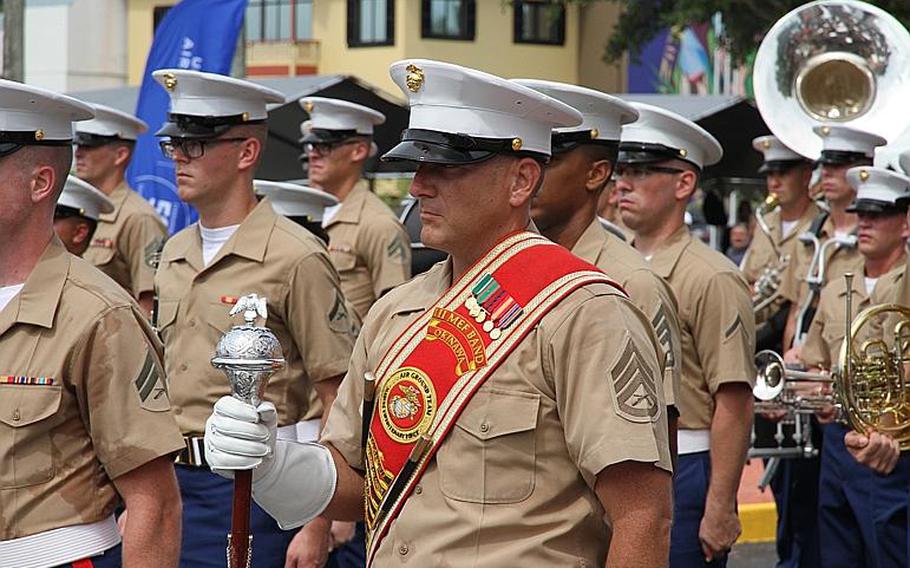 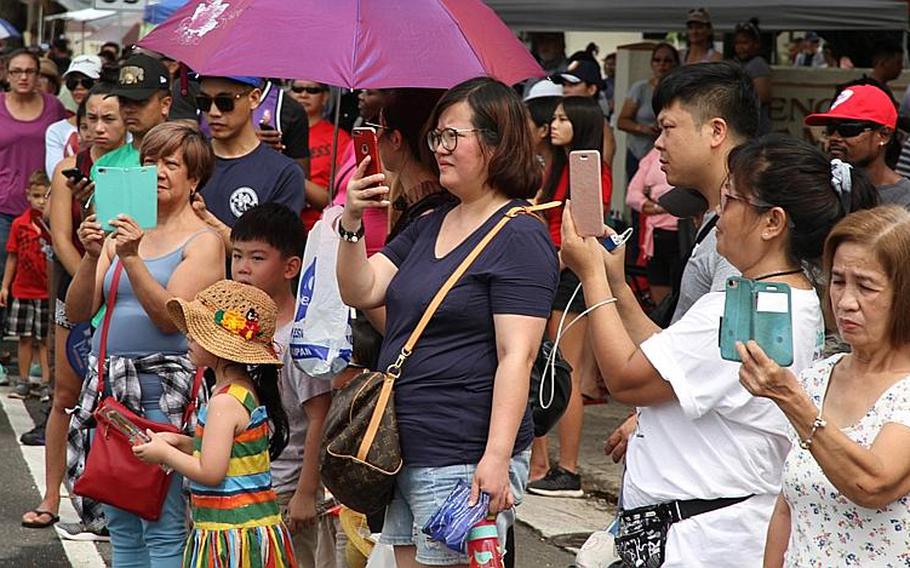 HAGATNA, Guam — On July 21, 1944, members of the 3rd Marine Division landed on Asan Beach to wrest control of Guam from the Imperial Japanese.

Okinawa-based Marines were hailed as heroes Saturday as they led Guam’s Liberation Day parade, an annual celebration of the U.S. Pacific island territory’s deliverance 74 years ago from a brutal Japanese occupation. Thousands of Guamanians and indigenous Chamorro lined the streets cheering and shouting, “Thank you for your service,” as the smell and smoke of Chamorro barbecue hung in the air.

“It’s very sentimental,” said local Stephanie Borja, as she sat under a tree along the parade route. “We’re very proud of the Marines and all of the [armed forces] … it’s very heartwarming and heartfelt that my mom is able to be here and see who liberated the island and where we are today. We’re very grateful for the Marines.”

Aurora Borja, 69, never misses the event. She said she is grateful to the Marines and the other service branches that fought to free Guam.

“My parents suffered during the war,” she said as military themed parade floats passed by.

The Borja family is typical of the patriotism seen throughout Guam. Aurora got emotional as she spoke of her two sons who serve in the Army; her husband is also a veteran.

‘A desperate battle’ The battle for Guam began just hours after the Japanese attacked Pearl Harbor on Dec. 7, 1941. After two days of aerial bombardment and strafing, 400 troops landed at Dungcas Beach, according to the National Park Service, which maintains the battle sites. Thousands more troops followed.

The resistance was quickly defeated. Fearing a slaughter of the local population, all of whom were U.S. citizens, the military governor ordered the island’s surrender, beginning 31 months of brutal subjugation where many locals were tortured, beheaded, raped and forced into labor.

On July 21, 1944, Marines attacked the central western coast of Guam, intent on taking it back, with the 3rd Marine Division landing at Asan Beach while the 1st Provisional Marine Brigade landed to the south in Agat, according to the Marines and Park Service. They lost approximately two dozen amtracs in the assault and hundreds of men.

The Americans established a beachhead by nightfall of the first day, but as they looked up at the steep ridges towering in front of them, they knew the battle was just beginning.

In the days that followed, they moved inland and climbed through unforgiving jungle terrain. The Japanese rolled grenades down on them from higher ground, Marine officials said. In the first two days of fighting, they suffered 615 casualties.

After securing the beachhead line, U.S. forces drove north and found the beheaded bodies of dozens of local Guamanians.

Organized resistance was declared over on Aug. 10, 1944. The next day, Japanese Gen. Hideyoshi Obata sent a message to the emperor from his besieged Mount Mataguac headquarters.

“We are continuing a desperate battle,” Obata wrote, according to the Park Service. “We have only our bare hands to fight with. The holding of Guam has become hopeless.”

The U.S. lost 1,880 troops fighting the Japanese on Guam with nearly 6,000 wounded, the Park Service said. All but 1,250 Japanese were killed, according to the Marine Corps.

The people of Guam suffered 1,170 deaths during the war, with another 14,721 surviving various atrocities. Approximately 75 percent of the population had been affected directly in some way.

‘Continuing our heritage’ Saturday’s Liberation Day festivities began for many locals the night before, as they set up tents along the parade route and cooked and reveled the night away.

“This is special because we’re continuing our heritage,” said trumpet player Sgt. Matthew Kitzen-Abelson, who was participating in his third Liberation Day parade. “We’re the III Marine Expeditionary Force band, but part of that MEF is the 3rd Marine Division. They’re the ones that came up on these shores here and liberated the Guamanians from Japanese occupation, so we’re continuing that heritage.”

“There’s nowhere better than Guam,” he said. “It’s very relaxed, everybody’s welcoming, and then it’s just a big party for Liberation Day. What can you not like, barbecue every day, you know, and all of that stuff, and my kids love it.”

‘Definitely part of me’ Later that night, the III MEF band’s popular music group, Adapt and Overfunk, performed a raucous set at the Guam Museum as fireworks exploded overhead.

In attendance was Julia Villagomez, who was 7 years old when the Japanese occupied the island. She was marched from Agana Heights to the concentration camp at Manenggon where she lost a baby sister and her grandmother.

She remembers being smacked around by the Japanese for speaking English. The rest she has largely blanked out.

“[The occupation] was very brutal,” Villagomez said. “You see older people who can’t walk anymore and you can’t stop and help them because then you’ll be beaten by the Japanese yourself.”

She said it was very important to her to come out and support her liberators.

“I love [the Marines],” she said. “I really love them. Every time they come in the parade you can see a lot of us crying because those were the first that I remember seeing.”

She said Liberation Day is extremely important to Guamanians. She had attended memorial services for the island’s war dead throughout the preceding week with younger members of her family. She hoped what Guam went through – and its traditions – would be passed on to the next generation.

“For me, it’s also for the younger generation … so they can realize how we felt, the hardship that we went through,” she said. “We suffered. Also, I think they should know what went on in the culture.”

Aurora Borja agreed. She said it was important for the next generation to keep the Liberation Day celebration going strong.

Stephanie Borja said she would.

“This is definitely part of me,” she said.