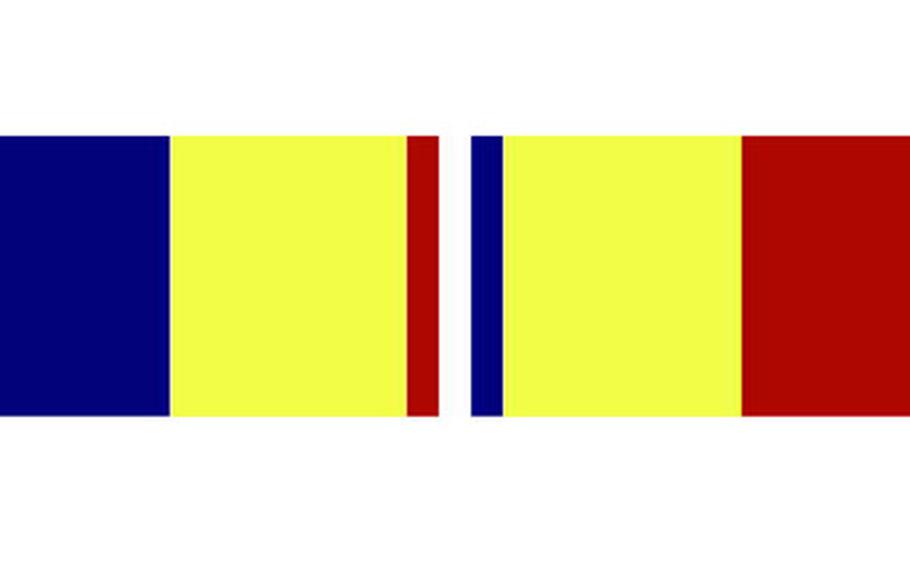 The Commander, U.S. Naval Forces Central Command and the U.S. Fifth Fleet recently approved the Combat Action Ribbon for Marines and Sailors of the 22nd Marine Expeditionary Unit (Special Operations Capable) who participated in combat operations in south-central Afghanistan from March 25 through July 10, 2004. The CAR is awarded to servicemembers on an individual basis who meet specific eligibility criteria. ()

Marines who encounter roadside bombs and respond appropriately now are eligible for the Combat Action Ribbon, according to the Marine Corps.

The ribbon was and still is awarded to Marines who performed satisfactorily in a firefight or under enemy fire, said Marine Corps Commandant Gen. Michael Hagee in a Marine Corps announcement.

But warfare has evolved to include a new threat &#8212; roadside bombs, also known as improvised explosive devices &#8212; Hagee said.

&#8220;I consider exposure to a detonated IED as being enemy fire, therefore, Marines who take appropriate actions during such an engagement meet both CAR (Combat Action Ribbon) requirements,&#8221; Hagee said.

The change in eligibility requirements is effective immediately and retroactive to Oct. 7, 2001, Hagee said.

&#8220;Marine Corps Forces Central Command will be responsible for coordinating a review of those individual cases previously submitted but not approved for the CAR,&#8221; Hagee said.

The Marine Corps has no numbers on how many Marines have been denied the Combat Action Ribbon because roadside bombs were not considered enemy fire, said Marine spokesman Maj. Douglas Powell.

The Marine Corps has awarded about 68,000 Combat Action Ribbons since the beginning of operations in Afghanistan and Iraq, Powell said.

Under the change in eligibility for the award, Marines still have to perform to a certain level under enemy fire to include an IED attack, Powell said.

Powell stressed that the change in eligibility is not a new criteria for the Combat Action Ribbon.

Powell said he did not know how many Marines had been wounded or killed by roadside bombs in Iraq and Afghanistan but said the number was &#8220;significant.&#8221;

Instead of ribbons, the Army has three badges that specifically acknowledge a soldier&#8217;s participation in combat: the Combat Infantry Badge, which is reserved for infantry and Special Forces soldiers; the Combat Medical Badge, for medics, and the new Combat Action Badge, which is available to any active, reserve or National Guard soldier who meets the criteria.

The Combat Action Badge was authorized by Army Chief of Staff Gen. Peter Schoomaker in May 2005.

The criteria for the CAB specifically includes IED attacks as qualifying events, along with mortars, rockets, rocket-propelled grenades, and suicide bombers.

Stars and Stripes reporter Lisa Burgess contributed to this report.